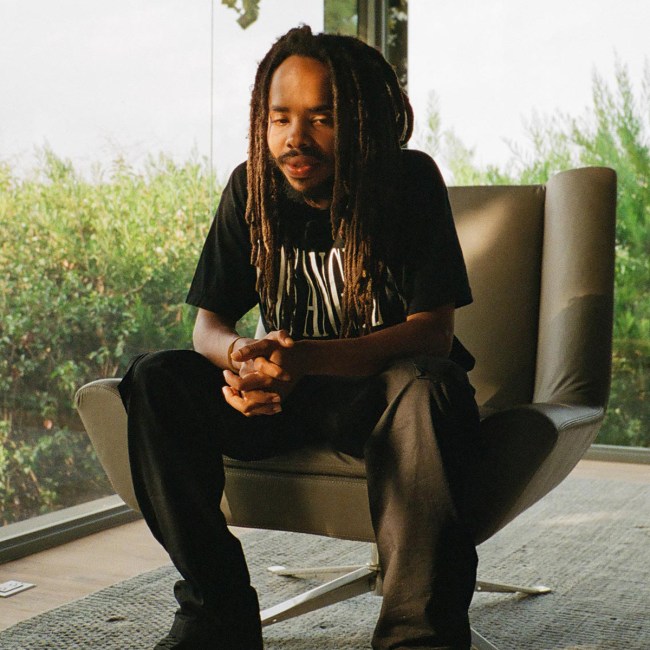 Remember when the internet was larger than just five sites featuring screenshots of the other four sites? So do we. Support truly independent journalism by subscribing to Passion of the Weiss on Patreon.

Will Hagle still makes impromptu purchases based on the power of cover art alone.

If you’ve been following Earl’s career since he was Odd Future’s mythological missing piece, a teenager stranded in Samoa, you’ve had over a decade to shout along with his most memorable lines. But until Sick!, his latest brief opus, it had never been this fun. 2013’s Doris was a solid but uneven official debut hindered by unrealistic expectations. I Don’t Like Shit, I Don’t Go Outside was the best album of 2015, but Earl was living what he wrote over beats he self-sequenced, and the tone was grim.

His last full-length, 2018’s Some Rap Songs, as well as 2019’s Feet of Clay EP, were further spirals into dark abstraction: the product of Earl immersing himself in the East Coast-headquartered lo-fi scene and dealing with the grievous death of his father. The poetry has been prevalent in each of these projects, evolving with Earl’s age and experience. Weariness lingers in his words on Sick!, but in a significantly diminished capacity. The album has 10 tracks of lines which, for the first time in the author’s career, can be tossed back out to the breeze with a celebratory energy matching Earl’s contagious mood.

Listening to Sick! is simultaneously easy and challenging. In short 24-minute runtime, Earl packs dense verbiage into each track, encoding complex ideas and layered meaning in his lyrics. To appreciate what he’s saying, the album demands repeated plays. Unlike the last two albums, you can also listen without thinking too hard. Earl doesn’t abandon his avant-garde tendencies, but repackages them into more approachable production. The lightness of the beats makes for a more visceral listen than previous projects, which had intellectually-stimulating arrangements but felt as cold and bleak as Earl’s general outlook. Yet this remains tonally consistent. You can run it right back after you finish it, as if the whole album is itself one big hypnotizing loop.

On more casual plays, certain lines pop out. Some of these are brief flashes of brilliant imagery. Lines with meaning that could be debated and deciphered, but are compelling and memorable even if you don’t stop to contemplate them. On “2010,” he starts with “I’ma need a bigger bag for the cohort” and later says, “Sharp incisors revealed slowly.” On “Lye,” “Toss the sword back in the vines.” The opening line of the album is “Strong spirit where the body couldn’t get asylum.” Later on that track, “Old Friend,” he raps, “Slick oil in a fish gill / I fill a void with the pen, feel the fear… shrill.” On “Lobby (int),” “When I get the ‘thrax I’m inhaling.” On closing track “Fire in the Hole,” “I needed a quick result, she see it and salt sprinkle.” This is imagery for imagery’s sake. Not straightforward descriptions. Whether you arrive at an immediate interpretation is irrelevant. The words are sharp enough to spawn infinite mental pictures for each individual listener. There are no hooks on Sick!, but the album’s best lyrics linger in the mind the way a catchy refrain might.

Other lines show how Earl’s sarcastic humor hasn’t faded, and instead has integrated into his more serious lyricism. Lines like “Hometown hold me down like a rock, so you know how I had to skip it” and “Caught a feeling, mama had me out in Temple / Not religious we was really out in Philly” are funnier than anything shocking he said on Earl. Lyrics like these provide a grounded balance to Earl’s propensity for exploring loftier concepts, but without sacrificing intricacy.

When you’re able to spend time with Sick!, you’ll find Earl has laid out a series of cryptic messages open to subjective interpretation. On album opener “Old Friend,” he raps, “What remain of the wolves meal / I held the page, gave the book ears / Whispered ‘thanks,’ hella pain, heavy brain in the Catskills / Played the shade, quite a deal, glad we stayed friends.” He mentioned “wolves,” “pain,” and “staying friends.” Is he talking about Odd Future? He is and he isn’t. His intent becomes irrelevant if people interpret the song that way, because the words led them to that analysis. Regardless, the lyrics give everyone a vision of Earl folding a book’s page and whispering thanks, before The Alchemist closes with the sound of what feels like heavy (b)rain in the Catskills atop a short vocal sample echoing out. Anything the words could be, they are.

Even Earl’s most seemingly solvable puzzles have incomprehensible complexity. On “Titanic,” Earl raps, “Mask on like a supervillain / Daniel, who you in the den with? Lion.” A reference to MF DOOM and the character from the religious texts. Punctuated with a possible pun, the same one employed in other forms on “Lye.” On “Tabula Rosa,” an early single featuring Armand Hammer, Earl says, “Been to there and back, tall tales tossed to the breeze / We keep facts in the midnight wax, family tree sap / Light leak through the leaves on familiar tracks.” There is bound to be deep meaning lurking in those lines, but the University of Phoenix-level analysis on Genius won’t solve it. “Family tree sap” alone could take a dissertation to unpack. Lyrics like these fly by so quickly they are impossible to engage with in the moment, but are captivating enough to return to later. Across the ten tracks, Earl’s words mean something. The act of listening to Sick!—either contemplating lyrical connotations or simply marveling at construction—is the part of the process that has the most tangible meaning of all.

One of the Daniels alluded to on “Titanic” is Earl’s villainous hero – and packing Sick! with hook-free lyrical dexterity is an homage to his influences. He also uses the pandemic as a loose thematic anchoring the way DOOM did with grub on MM.. Food. Covid is a recurring reference but not the main subject. A starting point that Earl can return to keep a sense of consistency, then jump off from into other more interesting territory.

With brains primed, from the album’s title to its marketed backstory, it’s easy to focus in on the overt detectable mentions. Lines about the “singular current event” aren’t as commonplace as Omicron, but do pop up with unavoidable regularity like they do nowadays in regular conversation regardless. On “Vision,” Earl asks “how long you waving the rent?” A few lines later, “Fuck out my face with syringe” is enough to fuel polarizing theories, again, about meaning. Covid and its societal effects have touched, and will touch, in some form, unfortunately, all art produced in its wake. But Sick! is not Bo Burnham’s special. We already found out in 2015 how staying inside impacted Earl. Now, civilization following suit seems to have shifted him the opposite direction. In another flash of imagery, he says, “I came from out the thicket smiling.” In a time of collective dread, Earl has settled into clarity.

The focus on the pandemic’s influence over the album in criticism and interviews reveals our innate desire to make Earl’s music, life, and career fit our desired narrative. He was banished to Samoa against his will. He struggled openly with his mental health across the course of his discography, and the increasing darkness of his music threatened to consume him. Sick! Is the culmination of that arc. A result of new fatherhood. A humble expression of gratitude before God. A return to possible happiness. RIGHT?

Those threads can be found if you’re looking for them, but they oversimplify the album’s power. Sick! is fragmented poetry. Each line contains endless possibility. Nothing is obvious. The music underneath makes each verse fuller and richer, filling the rhythmic voids that his pen alone cannot.

When Wiki and Navy Blue stopped in at the Echoplex in December, the crowd was as dense and covid-resilient as Sick!’s lyrics. Hoodie pulled over his dreads, Earl slinked through waves of cross-armed kids, who erupted when he stepped onstage. Phones flew into the air while he tore through “Nobles,” his collaboration with Navy Blue and The Alchemist. The audience yelled along in karaoke-like unison. He stayed onstage while Wiki came on, to perform a couple of their co-features. As soon as Earl left, the place deflated. It wasn’t because the crowd was disappointed with the next performer. This was a Wiki show, after all. Half God was a top 5 album of 2021. Earl was a bonus. An audience could forgive Wiki for serving them dessert before the meal, and Wiki could learn his lesson for next time.

The reason the excitement evaporated was because the songs from Half God, in such a setting, simply did not bump the same way. Still recovering from a year of lockdown, the crowd was ready to let loose with uninhibited energy. To flail limbs into each other. To exhibit a physical reaction to the room’s pummeling sound waves. Wiki could conjure this a decade ago with Ratking, around the same time Earl came back to do the same with OFWGKTA. Half God, produced entirely by Navy Blue, is mostly devoid of drums. Wiki raps like a maniac, a deserved co-star alongside his West Coast peer. The difference was the songs Earl and co. worked through had kicks and snares that rattled speakers and bones.

Sick! is another testament to the naturalistic importance of percussion. On at least three tracks—“2010,” “Titanic,” and especially “Lobby (int),” the booming kicks, popping snares and stuttering hi-hats are the main draw. Bait to lure you in to focus on the words, whether you hear them on the first listen or the two thousand tenth. As is the case with his lyrics, though, the production sneaks in elements to appease Earl’s headier appreciators. The beat is blunted and obscured like Earl’s vocals on the title track. Kits are spare—part of the sample rather than an added element—on “Tabula Rosa” and “Lye.” A healthy two songs—“Old Friend” and “God Laughs”—avoid them altogether. On “Fire in the Hole,” Earl references Bootsy Collins’ “I’d Rather Be With You,” then the opening explosive noise of that song drops in with an unexpectedly placed flourish, ringing out like an accidental kick drum. The album ends with the subtle fast stutter of barely perceptible kicks.

Both lyrically and production-wise, Sick! is filled with these tiny moments of awe-inspiring beauty. With each listen, you can focus in on different little pieces. Each element of the beats and words comprise the overarching structure: a relatively short burst of a mesmerizing sound, rife with brilliant Earl penmanship recited in precise technical style. Sick! Is a rare work where new or altered interpretation can be discovered in each run through. A series of vivid murals painted in rapid succession; its author’s mysterious intent lurking just beneath. It’s the most fun album in Earl’s history, whether you’re poring over lyrics or just shouting them out, shaking your head in joyous appreciation.

A Definitive Ranking of the 20 Greatest G-Unit Remixes