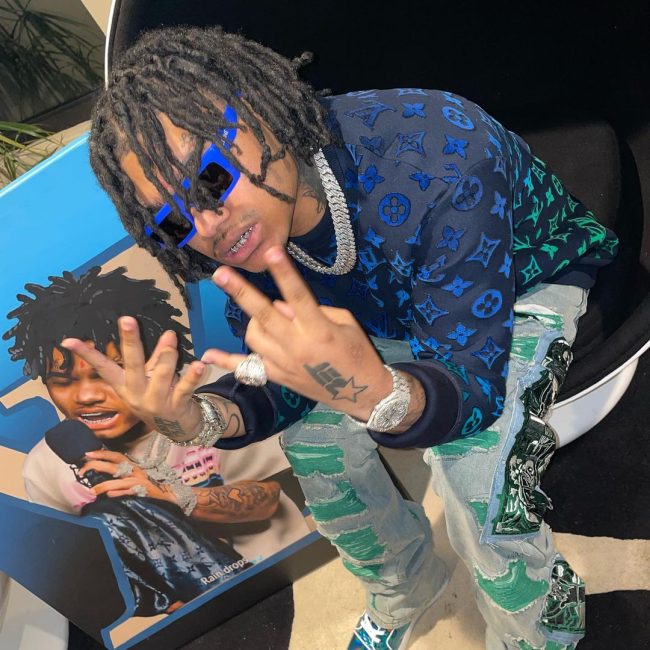 Harley Geffner has been rocking an Adelaide 36ers jersey all summer.

Ratchet rap is back and in full effect. I could sit here to argue it never really went anywhere and bring up all sorts of examples from the last 5 years, but everyone with two eyes can see its California moment in the sun faded with the demise of Tyga. But these Memphis women are bringing back that new post-ratchet energy with authority. GloRilla’s crew of headlight twerkers are much more than just that – each of them brings their own swag to their songs and that slurry Southern twang never gets old.

“Shabooya” is a playful schoolyard foot-tapper – each rapper introduces themselves at the beginning of their sections, and fools around with some fun rhyme patterns, making sure to hype each other up between each line – like when Gloss Up jumps into her second section with “Bitch I’m Gloss (mmhmm) that pussy costs (mmhmm).” This brings you straight back to the lunch room, banging tables and freestyling in circles with everyone yelling “YEAH”s between each bar. This is tapping into a specific nostalgia that I’m sure most rap fans have felt, as those adolescent schoolyard freestyle circles are basically the equivalent of campfire singalongs to people who still listen to the Glee soundtrack. It’s burned into our subconscious, and these badass Memphis women feed off that in a non-gimmicky way.

Diamonds, money, fame, riches – none of that means anything when you lose somebody you love. NoCap’s close friend Semaj Lee, better known as Wap, passed away from an overdose, and NoCap’s beautiful reflection on their friendship over some heartfelt strings taps into the brutal emotions that come with such loss. It’s real-life grieving, which is messy and confusing, but NoCap wraps it up in a way that’s reminiscent of feeling it in real time.

When someone first dies, the instinct is often to recount the last memory you had with them before you dive even deeper into the grieving process; NoCap starts the song talking about a story from just a few weeks ago. That’s that “it doesn’t feel real to me, I just saw him,” stage. Then comes the wailing – his repeated cries – “no more, no more, no more, no more,” when he thinks about never getting to see Wap again bring out that primal disbelief. Then it’s the rational sadness – NoCap questions whether happiness exists, he laments the things they didn’t get to do together, he starts thinking about his Wap’s daughter and how she looks just like him, his grieving mother, and sings about how his friend still feels so real in his dreams. Nobody’s process happens exactly the same, but NoCap’s encapsulation of his grief in “Heaven For Thugs,” is as real and striking as grief feels.

Rx Papi’s real life dope dealer raps tickle a nerve that very few pill-pushing rappers can actually hit. Only those in the pantheon of drug rap like Pusha T or Max B even come close to really painting the street level psychosis induced by the game in the way that Papi does. Nevermind the first few minutes of excellent rap here – let’s zero in on when Papi starts ramping up his energy. Around the 1:40 mark, Papi details his entry into the game and how he felt each step of the way. He scoffs at the idea of him feeling like he made it after his first ten grams. 20 grams later, he raises his voice a little as he says “Yeah, I’m the greatest,” then with 50 and 100 grams, it’s on. He lets out these yelps at each level that can only be described as powering up, until he hits 200 grams and unloads: “N**** I’M THAT FUCKIN’ N****”!

The more that rap music continues to evolve, the deeper my appreciation for Chief Keef goes. Sosa’s children have children in the rap game now, and seeing how rap 10 years from his breakout has coalesced around the sounds that he pioneered is inspiring. Different strands of his style have broken out into their own fully-formed subgenres. There’s no obvious parallel in the shifting of the entire genre in the way he has. Drill is the obvious one, but his warbly autotune, slurred and layered with melodic presets that sometimes click neatly into place and other times surprise you with an out of place note to build tension was one of the major foundations of rap burgeoning on SoundCloud in 2016-17.

Iayze is a direct descendant of that lineage – you can draw the line right from Keef to Duwap Kaine to Iayze. None of this is to take away anything from what Iayze is doing – he is his own artist who is not just an avatar for his influence. The music sounds fresh as ever, and that’s a testament to not just the stylistic foundations, but Iayze’s take on it.

FCG Heem plays a careful balancing act here: he opens the song with a hook where he rips double time raps over this sweet, almost meditative beat, staying ahead and directing where it’s going. It sounds natural when he slows his flow a little and lets the beat catch up, like it’s smoothing out to its more natural pace. But there are moments he jumps too far ahead and falls off the rail a bit. Given how easy that speed sounds on the hook, I don’t mind the moments where he doesn’t make that magic work as nicely. Lil Poppa provides a nice foil to Heem’s voice, as the two sound really smooth passing the baton to each other. Melodic Florida rap is some of the most fun stuff happening in rap right now.

Blueface Embraces Being A "SoundCloud Rapper" With New Tattoo