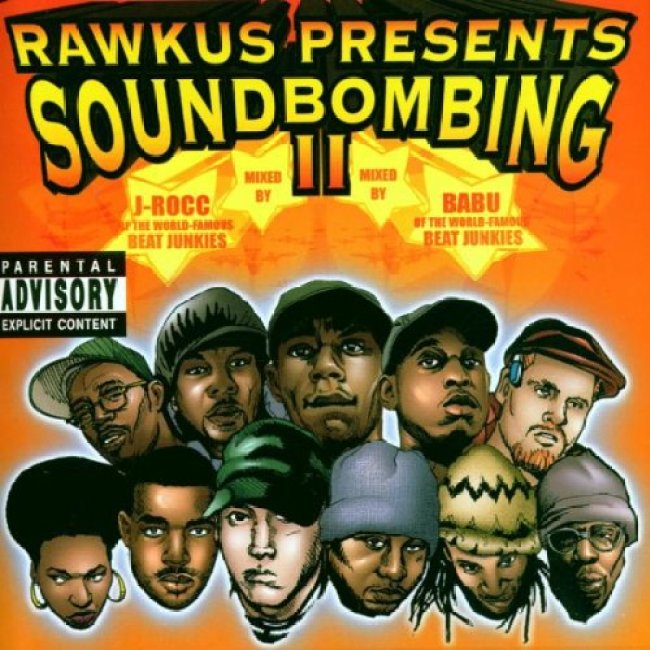 At the top it’s just us. Support the realest source of independent music journalism by subscribing to Passion of the Weiss on Patreon.

Pete Hunt is waiting on Phil Knight’s next offer to buy the Blazers so that Chip Kelly can come through and turn things around.

Rawkus Records cemented its indie rap juggernaut status in 1999. After securing a distribution deal with Priority Records, the New York imprint proceeded to drop a string of critically and commercially successful releases, including Mos Def’s Black on Both Sides, Pharoahe Monch’s Internal Affairs, and The High & Mighty’s Home Field Advantage. The year kicked off, though, with the Soundbombing II compilation, which featured the entire Rawkus roster rapping alongside big guest names from the bi-coastal underground scene.

Flush with Rupert Murdoch cash, the label could afford to back the album with a major promotional push in music mags and a polished video for the lead single, Common and Sadat X’s “1-9-9-9.” BET’s Rap City even aired a special Soundbombing II episode. With the hype machine in overdrive, the album debuted at #6 on the Top R&B Albums chart and #30 on the Billboard 200.

If you had the right group of friends, this was a heavy rotation album that summer, doing time in the disc-changer alongside Ryde or Die Vol. 1, Guerrilla Warfare, and… Venni Vetti Vecci (which is way better than you remember). It wasn’t surprising, then, that back in 2019 there were a number of twentieth-anniversary write-ups and podcasts celebrating the compilation and its impact. But what the internet has lacked, until now, is a methodologically sound and completely subjective ranking of every track.

Reader, putting this together was no easy task. What makes Soundbombing II such a fun listen is that it’s structured like a mixtape or an underground hip hop radio show, with stylistically diverse rappers blending into one another, thanks to album hosts and resident mixers J Rocc and DJ Babu. Every song here is solid, but the logic of ordinal ranking requires us to identify a bottom and top and proceed accordingly. (We’re skipping the transitions and skits, so apologies to Q-Tip, J-Live, and Prince Paul.)

If things didn’t end badly, they wouldn’t end at all, as a feller says. The last full track on Soundbombing II feels slightly phoned in, with Hi-Tek serving up the limpest beat on the album and Talib rapping on autopilot. Again, it’s not a terrible song, but it’s an easy choice to slot into the lowest tier.

All of my fellow Alkaholiks fans already knew that Tash could spit, but his appearance on Soundbombing II really reinforced his reputation as a rhymers’ rhymer. His verse here is by far the most interesting part of the song, as his co-stars on the track, Evidence and Iriscience of Dilated Peoples, were competent but not as charismatic.

A lot of the names on Soundbombing II would be familiar to fans of previous Rawkus releases, but totally unknown to the rest of us. Who was this Thirstin Howl III with the aristocratic suffix? Should we have been more concerned about his health (“nervous, chain smoker, high blood pressure”)? Was he also the “Brooklyn Hard Rock” identified in the chorus whose style was “mad tight”—or was that someone else? Two decades later, we’re still looking for answers.

The Diggin’ in the Crates Crew consistently put out strong work, but at the time it felt like they were trying a little too hard to highlight a vintage New York sound at a time when Bad Boy, Trackmasters, and even occasional D.I.T.C. producer Rockwilder were pushing it in different directions. Listening today, though, those late 90s / early 2000s records sound like a natural extension of the previous decade’s sonic palette, rather than a nostalgic revival. Diamond D’s production and rapping here is a perfect example of how a dusty vinyl sound can still sound fresh.

This tracks benefits greatly from the presence of Bahamadia, the only female rapper on the album and a truly versatile performer. Listen to how natural she sounds on everything from Roni Size’s drum and bass to Guru’s jazz rap. She’s great on this cut, and a perfect foil for Talib, who has always soundest strongest when trading bars.

If you’re the kind of fan who (a) thinks the artist formerly known as El-Producto peaked with Fantastic Damage, or (b) drops “hegemonic” and “Gramscian” in casual conversation, this is 100% your favorite Soundbombing II track. But if you weren’t introduced to El-P until his festival-ready RTJ work, then his flow here may sound jarringly dense and off-kilter. The best way to reconcile these contradictions is to listen to his verses on The Cold Vein immediately.

Now we’re getting into the really good stuff. It’s hard to imagine Rawkus existing without Yasiin Bey, who helped deliver the label’s most critically acclaimed album (Mos Def and Talib Kweli are Black Star) and eventually its biggest song (“Ms. Fat Booty”). He’s also one of the only artists (along with Talib and R.A. the Rugged Man) to appear on all three Soundbombing compilations. “Next Universe” isn’t his strongest contribution to the series, but it’s a great representative sample of all the qualities that made him such a star.

Now we’re getting into the really good stuff. It’s hard to imagine Rawkus existing without Yasiin Bey, who helped deliver the label’s most critically acclaimed album (Mos Def and Talib Kweli are Black Star) and eventually its biggest song (“Ms. Fat Booty”). He’s also one of the only artists (along with Talib and R.A. the Rugged Man) to appear on all three Soundbombing compilations. “Next Universe” isn’t his strongest contribution to the series, but it’s a great representative sample of all the qualities that made him such a star.

The best part of this song is that, despite name-checking the cerebral British director Stanley Kubrick throughout, R.A. the Rugged Man comes across as the type of person who would beat up a backpack rapper. There’s a genuine sense of menace here (“Do somethin’ tough guy, who the fuck want to die?”) that seems out of place on a Rawkus release, and maybe there’s a better timeline where he ends up in State Property.

This is the debut of Rawkus’s most high-profile free agent signing, Pharoahe Monch, formerly of beloved duo Organized Konfusion, and from the jump it’s clear that dude is just one uncleared Godzilla sample away from being a huge star. Shabaam Sahdeeq is also really great here, and it’s a shame these two didn’t collaborate more often.

As the ol’ adage goes, always read the YouTube comments:

“Puba and Sadat are great, but I can’t believe how no one is mentioning how Sir Menelik really stole the show on this one🤦🏿‍♂️”
“Man Sir Menelik was really underrated in the 90’s.. best work was on Dr. Octagon”
“Did anyone else find out about this from the Dr. Octagon song?”
“See… I thought I was trippin all these years about that Dr. Octagon shit!!…thank you!!!”
“This song was released three years after the song Earth People by Dr. Octagon, when he mentioned it wasn’t invented yet. Listen to it!”

The internet’s most reliable public forum is once again correct. Menelik really is great on Dr. Octagon (or Dr. Octagonecologyst if you’re not into the whole brevity thing), where he plays a character called Chewbacca Uncircumcised and raps about oscillating current. And he’s just as compelling here with a nimble verse that references both “telekinetic prophetic maneuvers” and Avirex letter jackets.

Somewhere somebody is writing a similar version of this article, but ranking all the songs on the Tony Hawk’s Pro Skater 2 soundtrack. On that list, “B-Boy Document ’99” also lands at #5, right between Fu Manchu’s “Evil Eye” and Naughty By Nature’s “Pin the Tail on the Donkey.” The author notes that the track references the 1987 classic “B-Boy Document” by the Krown Rulers, and would later appear on the High & Mighty’s debut Rawkus release, Home Field Advantage, which had maybe one other good song.

Eminem was featured on Rawkus 12” “5 Star Generals” with Shabaam Sahdeeq a year earlier, but by the time Soundbombing II dropped he was a rising star thanks to the recently released The Slim Shady LP. That made his appearance here a big draw, and fans who came to hear elaborate rhyme schemes and battle rap-ready punchlines wouldn’t have been disappointed. “Any Man” is vintage Eminem, especially if you’re someone who prefers his high-pitched, nasal delivery to the deeper, angrier voice he’d begin deploying on The Marshall Mathews LP. His lines are perhaps a little overwritten in places, but that technicality was his calling card and his punch lines are genuinely funny (if terribly problematic and predictably homophobic). Hearing this now, you have to wonder how his career would have turned out if he’d signed with Rawkus instead of Aftermath and spent another year or so dropping verses like this on boom-bap and chipmunk soul beats.

Pharoahe Monch’s “Mayor” is the first installment of what’s now recognized as a triptych of songs about either assassinating Rudolph Giuliani (Screwball’s “Who Shot Rudy?”) or dry humping him on the dance floor (!!!’s “Me and Giuliani Down by the School Yard”). The beat is built around the same Lamont Dozier sample that popped up on Supreme Clientele, and Pharoahe completely kills it. An absolute banger, case closed.

Medina Green have a very limited discography, and nearly every track they ever released appears to have been collected on two mixtapes, U-Know The Flex (which is on YouTube) and Fresh in the Flesh & More (which is not). It’s an absolute shame they didn’t work together more with Mos Def, because they have great chemistry on the Posdnous-produced “Crosstown Beef” and throughout their mixtape collaborations. The group’s main member, DCQ, has a high-pitched voice that blends perfectly with Mos, and the story they weave here is delivered in a breezy, conversational flow that really does resemble vintage Tribe.

Look, Common is kind of regarded as a lovable goofball now, especially after those corny NBA All-Star intros. But for a minute there he was absolutely brilliant, holding a mic like a memory and absolutely torching beats. His partner in rhyme here, Sadat X, was in peak form, and the combination of inspired rapping and lush production (from Hi-Tek) elevates this track to the top of this list—and really beyond. “1-9-9-9” is as good as any other top single from that year, a rich list that includes “Hard Knock Life,” “Back That Thang Up,” “You Got Me,” and “Still D.R.E.” This song 100% ranks in the same tier as those classics, and is one of the many reasons the Soundbombing II compilation is so fondly remembered.