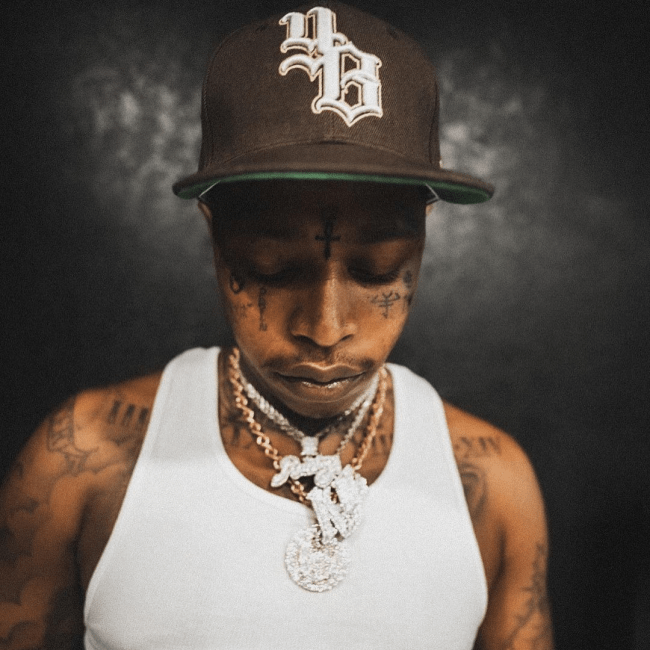 Image via Neph The Pharaoh/Instagram

Donald Morrison‘s engravings on his tombstone will be in wine mom font.

Nef The Pharaoh at his best sounds like a spiritual successor to Mac Dre, managing to be fun and deadly-serious at the same time in a way that harks back to the effortless brand of storytelling and conversational wit perfected by the Thizzle Man some decades ago. He was only 20 years old in early 2015 when he struck gold with “Big Tymin,” his first hit that was eventually remixed by YG and Ty Dolla $ign and helped him land a deal with E-40’s Sick Wid It Records. Since then he’s released a handful of studio albums and a series of mixtapes including a standout collaborative tape with 03 Greedo in 2018. He told PoW that same year that he hopes to finish writing an animated series meant for Adult Swim and plans on using his success to help put other people on in the future.

There’s an incentive to grow up fast when you’re from Vallejo, an area which has at times been considered one of the more crime-ridden cities in San Francisco’s Bay Area. On “Old Enough,” Nef fondly remembers the days he wasn’t of age to independently seek revenge on his enemies, fuck girls or buy drugs. These were deceptively innocent times in Nef’s life and throughout the song you get a sense that he wishes he would have appreciated them more. “18 with a baby, I wasn’t old enough, I made my family eat they words, I had to show them something,” Nef says with pride. Now that he’s of age to be a mentor to his young family members, Nef is wise enough to deter them from going down the same path he did, saying “my cousin tried to hit my cup, he ain’t old enough,” and “my daughter wants to go on tour, but she ain’t old enough, bought the whip with automatic doors so she can’t open em.” Nef is only 27, but has already experienced fatherhood and a redemption arc usually achieved by someone in their early forties.

A scrawny-looking white kid with face paint waving around a bunch of fake guns in front of a camera. We’ve seen it before and we’ll see it again. Marjorie W.C. Sinclaire is the rapper alias of Evanora: Unlimited, an Oakland-born producer known for his nihilistic take on rave music and industrial techno. This week he released 22nd Chances, a record that features enough innovative sounds and abject strangeness to officially make me a fan. The video for “Nexus 3 / Gold Country Lanes,” two songs on the album that feature the same beat, shows Marjorie in an almost uncountable number of truly crazy fits and a cursory glance of his website shows that he designed the clothes himself and is selling them, in case you’re interested in the “Pillowcase Dress Pants.”

Marjorie raps with an angsty, punched-in flow about teenage heartbreak and trips to Gold Country Lanes, a bowling alley in Sutter Creek, California. There’s something comforting about a song dedicated to a small-town bowling alley, the type of establishments that only really exist in America outside of major cities and across the midwest. The cosmic carpet, the old school jukebox, a vending machine for socks and a deceptively long menu of fried foods and cheap beers. “Gold Country Lane’s baby let’s go hit the bowling alley, air hockey table in the back, break the quarters out,” Marjorie says over light production that adds to the track’s overall suburban appeal. I could easily imagine this being played at the real Gold Country Lanes, which is about as high a compliment as I can give.

An invigorated JoogSZN provides Detroit mainstay Lou Grams and collaborator NipscoGang Foreign with one of his hardest-hitting beats this year. The bubbly bass and ethereal keyboard are perfect backdrops for NipscoGang to wax presidential, comparing the white diamonds in his watchface to Joe Biden and proclaiming that even his girlfriend open carries when they leave the house. Lou Grams, much like Detroit rappers Peezy, DameDot, Tee Grizzley and Babyface Ray, has been in the game for more than a decade, getting his start as loosely connected to the early 2010’s Team Eastside. Since then, a number of Team Eastside-connected artists have found at least moderate success, finding their individual voices and honing in on what makes them unique for dark and unsparing solo albums. Lou Grams assumes the role of leader with the type of lazy and deadpan tone reserved for a boss who knows he answers to no one.

When TNFW Nique says she has murder on her mind, it might not be exactly what you’re thinking. On “BDF (FNF REMIX),” which stands for “Baby Daddy Free,” TNFW writes a pro-choice anthem complete with a spelling of the word ABORT in the chorus. The video shows her dancing and fanning money in front of a local Planned Parenthood, which is a welcome sight compared to the pro-life protesters that sometimes haunt the entrance ways to Planned Parenthoods across the country, their presence likely deterring people from heath resources they need.

The song is a remix to Hitkidd & GloRilla’s “FNF,” a similarly-themed screed against broke boys and man-whores. Luckily for the Oakland-based TNFW, she lives in a state where abortion is legal and the law even protects out-of-state patients who travel to California for an abortion from lawsuits in other states. “BDF” offers the type of vulgar empowerment that works well in the face of a country that recently overturned legislation that made access to abortion a federal right in the U.S.

Central Cee stops by The L.A. Leakers with a verse helping to define his UK drill slang, reminiscent of when Big L did the same for his street vernacular on “Ebonics,” back in 1998. The Shepherd’s Bush, London MC picks up where he left off with this year’s “Doja,” the artists first huge hit and one he mentions in the freestyle, by dropping a similarly tongue-in-cheek verse that lets Americans know he’s flexing and balling just the same across the pond. “You say ‘the feds just done a sweep,’ we say, “the boy dem run in my gaff,” Central Cee clarifies, before adding “you say ‘On God, no cap’, we say “swear on your life, don’t gass.” Central Cee manages to break down UK slang in a way that doesn’t feel corny or obvious, helping introduce passive American listeners to his way of speaking before he releases his next big song.

It’s powerful to see Keak Da Sneak still doing his thing even from the confines of a wheelchair. The Bay Area legend who helped define the hyphy sound with songs like “Super Hyphy” and E-40’s “Tell Me When To Go,” has been partially paralyzed since 2017 after being shot eight times in an attempted robbery in Oakland. We haven’t seen too much of the Bay Area icon since then and his presence in the new Haiti Babii song warrants at least a small write up. In the video for “YEE,” Keak raps in front of a mural of The Jacka, another Bay Area legend who was shot to death in 2015. Keak has experienced a small cache of tragedies in his life, from getting shot twice in one year, to seeing his close friends and associates slowly get killed off one by one. Seeing him is a reminder to appreciate the legends we have while they’re still breathing and also that Keak would make an amazing actor, in the same vein as Snoop Dogg’s wheelchair-bound appearance in Training Day.