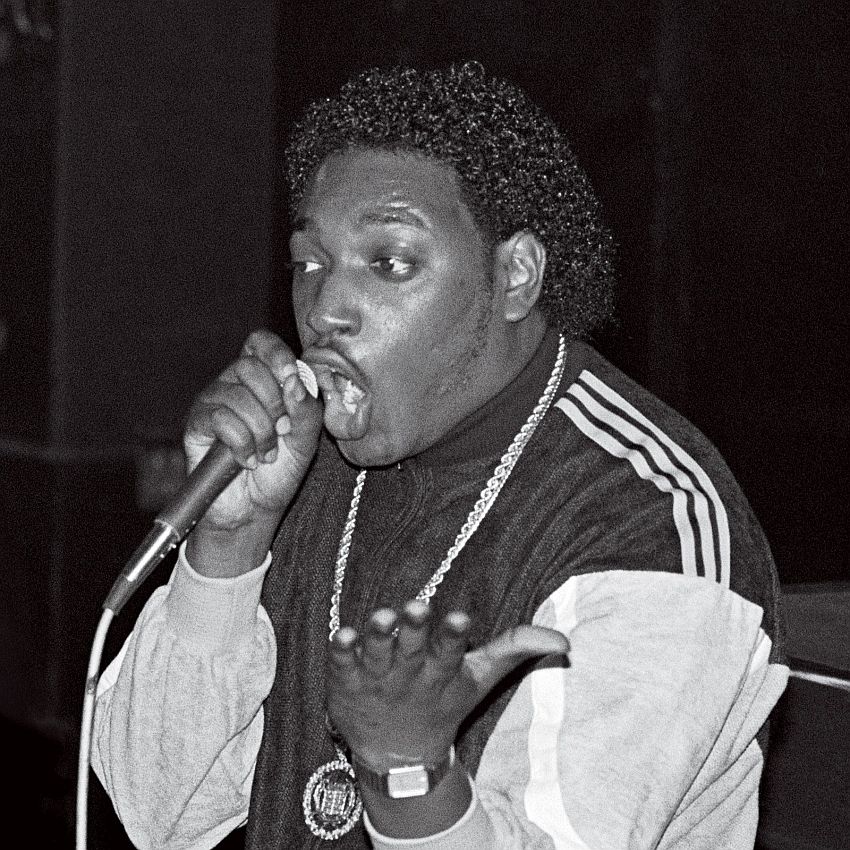 Please support your favorite rap scholars by subscribing to Passion of the Weiss on Patreon.

T La Rock’s “It’s Yours” has the noble distinction of being the first thing ever with a Def Jam logo on it. Released in 1984, its influence and incarnations within hip-hop rippled for decades. Famously used in Nas’ “World is Yours” and PE’s “Louder Than a Bomb,” it has supposedly been sampled over 300 times; as recently as 2018 by Playboy Carti.

The pummeling beat was made by a Mister Fredrick Jay Rubin in his NYU dorm. Rick, as he was known, was DJing for a group and DJ Double R was his name. The group, who’d later call themselves the Beastie Boys, happened to be in the studio that day and can be heard gleefully in the chorus of “It’s Yours.” Above the drums were cascading scratches by the legendary Jazzy Jay— then a 21-year-old member of Soulsonic Force and whom Rubin also brought to the table. Visionary producer Arthur Baker liked it so much he put it out through Partytime, a subsidiary of his existing label, Streetwise.

Deep creative energy certainly surrounds the song, but also key to its indelible status is the adept rapping abilities of one T La Rock. “T” was for Terry though his full real name is Clarence Ronnie Keaton. His voice and presence cut right through exploding 808s with an onslaught of vocabulary unheard of in 1984. He comes out swinging: “Commentating, illustrating, description giving, adjective expert, analyzing, surmising… musical myth-seeking people of the universe.” His eventual full length was called Lyrical King and exactly that he was. For context, we’re still a year away from LL’s debut and two years from Eric B. & Rakim’s.

T La Rock was a neighborhood king who came from a rich sonic progeny, an era where all his peers were true originators. His brother is Special K of pioneering group, Treacherous Three. Kool Mo Dee was always around. His friends were among the first in the Zulu Nation. He considers himself the true second “La Rock”— the first, of course, is Coke La Rock, the guy on the mic next to Kool Herc that day in 1973.

T then had a near fatal brush with death in the 1994, a traumatic brain injury where he suffered massive loss of memory and motor skills. It was covered by the New York Times in a wrenching story that described his long, uncertain recovery. He’s since regained his mental strength and full health at age 60, and there’s even talk of an inspirational film based on his life being made.

No other MCs or La Rocks, no reverends or grandmasters, were even close to T La Rock in 1984. A young bull, a ferocious tastemaker who was on the forefront of it all, T’s foundational impact on the artform will never cease. “It’s Yours” is a glowing b-boy document if such extraordinary things truly exist. Here, the lyrical king describes the colorful glory days from which everything came.

Take us back to how you connected with Rick Rubin.

T La Rock: I met Rick thru my younger brother, Special K, because Rick wanted to put out a record. He was still in college. Originally he was talking about making a song with my younger brother. But K was already busy with his partners L.A. Sunshine and Kool Mo Dee. So my brother asked me if I wanted to do a song with Rick and I wasn’t really interested. At that time I was already rapping and DJing heavily. I had the mixer, the turntables, the records, all of that. I was a huge record collector. But I was also working at a pharmacy then too. But my brother asked again and I decided to at least go meet Rick.

How did the situation strike you? What was his room like?

T La Rock: He didn’t really look hip-hop to me to be honest [laughs]. Not that he looked bad or anything, it just wasn’t what I was expecting. I saw his Roland 808 in his dorm room. We started talking and like I said, hit it off right away. I had already heard part of the song already because my brother had some of the beat on a tape.

What happened from there? Tell us what important steps took place that led to the final recording.

T La Rock: Well, this is an important party of the story. At that time, I had a DJ named Louie Lou. We had been cool for a couple years already because I also rapped. So I got all the lyrics together, and me and Louie and my brother went back to Rick. Rick and Louie also hit it off because Louie was a drummer. Like serious drummer, he studied it in school. So that day we recorded a demo of “It’s Yours.” I laid my rough vocals, then Louie laid some rough scratches. But the problem that day was that we only had one cassette tape. One! So only one of us could take home the demo tape. This is obviously way before digital everything we have now.

I wanted to take the tape home so I could practice my rhymes and get my patterns down. But Louie wanted to practice his scratches at home too. My brother was there and, remember, he spearheaded this whole connection to begin with. K said that I should take the tape home. Back then we would make pause tapes. So I was going to just make Louie a copy when I got home anyways. But K and Louie got in a huge heated argument over this demo tape. We took the subway everywhere, so we’re on the train late at night, arguing from lower Manhattan all the way to Kool Herc’s section of the Bronx, which is like a 45 minute ride. I remember this. So the whole time they’re going back and forth over this tape. The next day K knocks on my door and tells me, “Louie’s off the record.” Mind you, this is all over a cassette tape! And it’s my song! But anyways, it was my first official, professional anything so I wasn’t going to say no. I was just getting ready to go back to work, so I said okay.

What was Rick’s reaction to the sudden change? I’m guessing this is when Jazzy Jay gets involved.

T La Rock: Yes, so we had to go back and tell Rick [that] Louie is no longer going to be on the record. Rick says, “Oh it’s cool, I know someone who we can get to come in and do the scratches.” I say “Who?” and Rick goes, “DJ Jazzy Jay.” Of course I knew who Jay was. Rick knew DJs because it turns out he started out as a DJ himself and DJ’d for the Beastie Boys. Actually, a couple of the Beastie Boys, or maybe all of them, were in the studio that day. You can hear them in the crowd participation part of the record. Anyway, I knew who Jazzy Jay was because of the Bambaataa parties but I never walked up to him. So this is our first meeting and we clicked, same way me and Rick did. Jay brought his records and we went to Power Play Studio so Jay can lay down scratches. It only took a couple takes.

Tell us how Jazzy Jay compared to Louie, in your opinion.

T La Rock: I must say that Jay had the better choice of records than Louie. The other thing is, and this is no disrespect at all to Louie, but Jay was more organized as a scratcher. Louie cut really fast, but Jay was more fitting. If it were Louie instead of Jay, that famous beginning would’ve been different. Jay used the intro is a signature part of the song now. If you hear the very beginning of it, it starts with a scratch. Even up to this day, I am not sure if Jay did that on purpose because it sounds like he’s queuing it up. It probably sounded good so Rick left it in.

At that point in time there were literally maybe three rappers doing it at your level, and even then you were more advanced. What if anything do you attribute to this?

T La Rock: I come from a family of educators. That was my first time rapping professionally but I had been doing it way before. To sum it up, I’ve always considered myself a thinker. If you listen to my freestyles and all my songs, you’ll notice that later in my career, I even dumbed things down. I was always ahead. People used to say that I used big words and they’re all wrong. It’s not about using big words, it’s about having a big vocabulary.

What was it like when “It’s Yours” took off? It was always considered an underground song but its influence has always felt much bigger.

T La Rock: The lead pharmacist at the pharmacy I worked at was named Ken. And he hated hip-hop [laughs]. I remember because I first heard the song on the radio while I was at work. And it was on during the daytime! You perhaps might hear it on Red Alert late at night or something. There was a DJ named Tony Humphries who played it around noon when they’d do a master mix hour. So Humphries mixed in my song and it was so unexpected that I damn near lost it. Back then, you might hear Kurtis Blow or Run DMC occasionally on the radio but that was it. After the song was over, they said that it was the most requested song of the day! I threw my clipboard into the air! Ken came running out to see what all the commotion was [laughs]. That was the start right there. A lot of artists, especially from my time, will have a story about coming up the block or coming home from work and everyone knowing you because they just heard your record on the radio. Everything just felt so good.

10 Akron, Ohio Rappers That Should Be on Your Radar