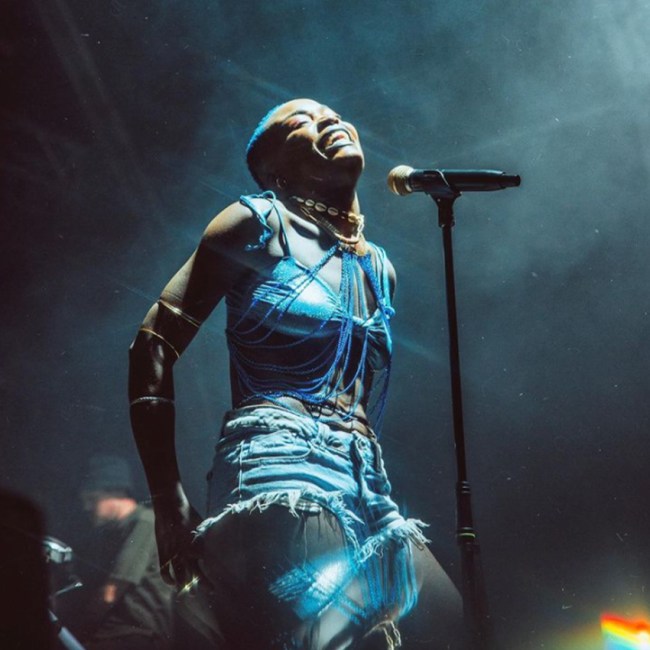 From Angola: This week we have witnessed the unstoppable force of nature that is the Angolan Pongo, who presents us with two songs that faithfully represent the main edges of her musical proposal. The first is a devastating pure kuduro song, a style we have seen from her since her days with Buraka som Sistema, in which Pongo shares the spotlight with crooner Tristany, whose chants provide atmosphere for her astonishing flows, where she strongly denounces the racial prejudice against the black populations that still abounds in Europe. The song is produced by DJ Marfox, a consummate explorer of the frontiers of the Luso-African batida, who shines from the intro with the irregular piano to the glitchy percussions. But the center of attention, like everything in her universe, is the spectacular energy and vigor of Pongo, who is able to link her vocal acrobatics with a choreographic precision like very few in her territory — she dances spectacularly while rapping in a different root metric, kind of like a living polyrhythm.

The track was originally premiered last month, but its official debut was on Monday 7, when they appeared in the second semifinal of the Festival da Canção, the most important musical show in Portugal, and where the country’s representative in Eurovision is chosen — Pongo can participate because of her dual citizenship. And there we could see the true power of “DÉGRA.DÉ”, Pongo’s impressive and almost hypnotic live presence. This was created for the live show, the natural environment of a generational talent like her.

On the other hand, “Doudou” is closer to Afropop, a mid-tempo song, with soft, airy melodies that soar while the instrumentation (100% organic, by the way) fills with adornments, especially via the delicate guitar licks. The apparent minimalism of the music truly works for her here — a single drum kit, no secondary percussion, a couple of guitars, bass and the occasional production flourish — to take over the proceedings with her mid-range falsettos that sound like caresses in the air. Like “DÉGRA.DÉ”, “Doudou” is made for the stage, which is noticeable in the video that presents a more relaxed version of her, but always with the force of presence that has made her one of the hottest tickets in Lusophone music.

From Guinea: By now you’ll know that I’m a sucker for Afro-fusions made in the Sahel region, and this is a great example of how traditional instrumentation takes center stage in the production. “Fabélan” shows Mariama Kankalabé at her heaviest and most melismatic, her voice conveying full authority and gravitas, engaging with the backing voices in a call-and-response that denotes how this region is so influential in shaping generations of Afro-diasporic music in the western end of the Atlantic. But the crux of the track lies in the instrumentation that accompanies her, especially the combination between the djembe and the calabash that dominates the entire theme and sets the tone. That is some fantastic playing, and that flute that appears from time to time doesn’t hurt either.

From Kenya: Breezy afropop with the right touches of Kenyan percussion sure is a formula that works most of the time, but you still need talented performers that bring skill and personality on top, which is why this meet-up of K. Pamba and Murasta, who operate on different fronts but are equally drawn to give some bite to their vocals, works so well. “Haiwezekani ” is the kind of jam that is simply pleasant in all of its length, but it’s especially soothing in Pamba’s first verse, where her summery flourishes dance around the two-chord sequence. Murasta’s performance brings some necessary earthiness and even matches Pamba melodically at times. This is what we usually need from a rap-sung collaboration.

From Zambia: I love songs that are amalgamations of styles, especially when the elements of each genre are incorporated in a way that you can see where the confluences and why they go together. “Alone” is a showcase for the evocative power of T-sean’s voice, who is capable of establishing a considerable emotional connection with the listener with soft and simple melodies, but it is the production where the track shines the most. In the first verse, you can hear the shekeres hinting at the familiar Afrobeats tresillo metric, but as the track begins to take its final form, the beat completely transforms into a feast of 808 snares that screams its inspiration from early-aughts American R&B. Both musical currents work perfectly even if you display their elements so obviously, which is a testament to the brilliance of this track.

More Afro Jams for you:

“I Got Shit for the Ladies, Youngsters, Hustlers, and Doctors”: An Interview With WiFiGawd

#DXCLUSIVE: The Off Daze Debuts "Makes Me Wander" Single

Eve & Trina Will Battle It Out in First Female Rap ‘Verzuz’