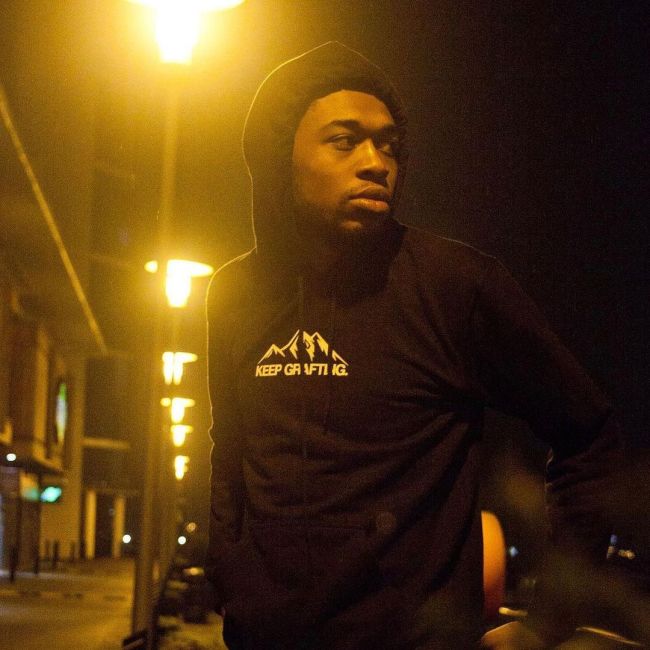 Kibo is one of those rare grime secrets known to those well-versed in GrimeReportTV videos. Or you might recognize the long-haired North West Londoner from his hilarious ChuckleVision freestyle with Chuk Dippah, which if released today, would’ve most likely gone viral.

Kibo had the witty punchlines, the Gen-Z-adjacent catalogue of cultural references stretching from Bleach to 90s heavy metal band Evanescence and the laser-sharp flow to become an alt-grime standout talent but was pretty much only accessible through YouTube ripoffs and Soundcloud rabbit-holes. That was back then, now the times have changed as loads of Gen Z UK artists are breaking through globally and Kibo has inserted the batteries in his back with his debut mixtape: FBFR: FUEGO BABY FURTARDO RETURNZ! (SORRY 4 DA LONGNESS).

FBFR says what is on the lid: he addresses the Kwengletarians who waited in uncertainty for at least one CDQ Kibo track that was mixed and mastered. The wait was worth it as we got what we wanted ninefold; the 9-track tape contains his most fully fleshed out, original and funniest material yet. And trust me, shit gets way more fucked up than the first episode of Devilman Crybaby.

Every track possesses its own sauce and “MR. LAMBORGHINI DEATHSLIDE” is one of the highlights. Kibo weaves in jungle-influenced production crafted by HNRO as he threads stomach-pinching lyrics about dropkicking pagans, being an unlimited amount of sexy and penning an infecting hook that’ll get your skank fingers activated through pure muscle recognition of an absolute banger. You may find yourself converting religions too.

Since the producer and MC Blay Vision dropped the perennial inspired riddim of the year, it spread like wildfire and soon every grime MC had the tune blasting from their speakers. Even somebody’s terminally online uncle tried to plant (and failed) their flag over Blay Vision’s oscillating synths, pulsating basslines and pointillistic snares and kicks.

What separates these grime productions from the rest is that if it’s the right canvas, any Grime MC worth their penny could be the equivalent of Kano’s leave-no-bones rendition of Ghetto Kyote.

So who got the hi-score? The perfect finisher? Who picked Chin-Li because they lowkey suck and overcompensate for it by spamming that annoying flying bird kick move? See who survived the gauntlet of lyrical hadoukens and comes out as the Ultimate Victor.

The Tottenham-bred grime MC gets a lot off his chest, writing rib-cracking subliminals over a smothering devil mix. It may or may not be a nod of the cap to his half-brother, Wiley, who pioneered this type of drumless instrumental. As the track heats up, Cadell sounds even hungry and disgruntled. He murders the beat to the point you can only hear the 808s thump like a faint heartbeat.

You’ll also think to yourself, “damn what did that kid do to make him want to kick a little him off a Vesta?”

West London’s Manga dishes out consistent tunes with the same ferocity Dhalim dashes out bullets of fists. Once the baby-faced member of the legendary grime collective Roll Deep, Manga quickly went from man to myth, shouldering the weight as an auteur of alt-grime with the genre-blending projects Outbursts from the Outskirts and Make It Out Alive.

It appealed to the open-minded grimeheads as well as those trying to venture into UK rap as a whole. This track is just one of the countless exhibits of evidence of why Manga still holds his well-earned reputation today.

He lays down his philosophy to navigating the music industry in the middle of the freestyle: “I was never part of the inside jokes but I liked it better on the outside anyway” before bragging about lyrically killing any MC and making sure to add plenty of Street Fighter References too.

If you know me then you know this version is going to be on the list. C4’s has been in the Birmingham grime scene since Invasion Alert heydays, reminding everyone (looking at you Londoners) where Birmingham’s on the map – no, not the north because it’s north of London – the West Midlands.

I love the way he casually outflows his opponents, promotes his brand in the next breath and weaves in and out with his way-too-smooth singing. Dude’s like that one cousin in the church choir, he’s doing a lot but he’s doing it with flavor so you’re rating the performance.

When he puts Brum on the map; it’s a whole new map, like an updated DLC on GTA V. There’s no more Gatecrasher and there’s even a Morley’s on Dudley Road now. However, it’s still close to home; there’s still Muslims and Christian Evangelicals outside the Waterstones in town debating whose God’s more legit; some things do never change, just like C4 dropping bangers and proceeding to promote his brand in the next breath.

The former Roll Deep member tampered the pirate radio airwaves with an off-skelter flow with brash bars and a knack for telling people to kiss his ass. Maybe it was a self-fulfilling prophecy as glory days soured into bitter memories but Trim has a talent for turning that angst into a bloodlust hunger and it really shines through on this freestyle.

Trim’s personally a Top 10 Grime MC for me since I stumbled upon his Soul Food tapes on YouTube during school so it was a dope surprise to hear the East Londoner join in on the trend. He may have left the “scene” choosing to rap on avant-garde electronic beats supplied by James Blake and Burke but he takes the soul with him on any mic he spits on.

I approached this freestyle as impartially as I could and immediately closed the video when he rapped “I may have to raise up my hand like Will Smith and slap yaaaaa” as if he’s struck gold.

I tried guys, I really did. It’s not that bad but from the proclaimed Godfather of Birmingham grime, it’s just not saying much against the others on this list.

Let me be a dickhead “music journo” for a second here: if spitting bars about MC’s looking like they have AIDS in a LotM clash and mainly having one of your songs played as a joke to resuscitate a shit houseparty makes you the Godfather of Birmingham grime – then fuck it – why not give D4NNY his flowers for using Autotune in 2011?

I was already vibing with this version already but man, that beat switch at 1:55. The Nottingham underdog of new wave grime is like that one guy who you think isn’t cold at Street Fighter but rolls through the combos and finishers in front of your mates. The “EFFED” rapper shows again to everyone that there’s so much talent existing away from the M25.

Renowned for his skippy flow which is pitch perfect for clashes, supplying hard guest verses to the likes of JME and member of the now-disbanded South London grime crew, Fatal Assassins. P Money let everybody have their fun before stealing the crown the way he stole that younger’s phone back then. It’s worth it though; the same way he stole teenaged grimeheads’ eight hours of sleep because we stayed up like we were in the Blitz during the Great P Money and Zeph Ellis War.

Perhaps it’s apt; his bars down drop like hellfire from the thunder above tied with his effortless laser-sharp flow, and a ruthless steeze backed by years of radio and shelling shows. Just listen to the bit where the Blue Borough brigadier proceeds to tell law abiding citizens their life is some chick flick and segues into a dope Nipsey Hussle shoutout.

Pretty V is one of the most intriguing rap collagists in the UK scene right now. Reigning from Yorkshire, England, his previous works such as Liberty City were lo-fi hazy and contemplative, but now he’s taken the form of Pretty V, an adrenaline-fuelled beast driven by a rebellious jettison of conventionality – the punk ethos of Playboi Carti’s Whole Lotta Red and the emotional sincerity of Daniel Johnston’s FUN or 1990.

In COLD, the abrasive mixing that adds texture as he stomps all over the Gameboy-corrupted beat manoeuvring like the one of the Generation of Miracles in Kuroko no Basket with charged up declarations and ad-libs. The crazy thing is it doesn’t sound forced or overly elaborate, it just comes off naturally.

Now let’s just imagine what these songs sound like live.

The art of the posse cut is alive with the Mowalola-orchestrated BUNDLES. Although the song might be promo for the subversive and gender-fluid mononymous clothing brand which pays homage to ‘70s Nigerian Rock and hyperpop aesthetics.

The Nigerian-born and London-based designer and rapper doesn’t take the center stage, bar from slurring “BUNDLES, BUNDLES, BUNDLES, BUNDLES YEAH!” at the beginning like a mantra. Instead she employs a transatlantic dream-team of femme fatales (Brazy, Deto Black, Princesa 28, Bby Slut, Hook, VIZE) to take the musical spotlight.

Hook barges through the mix with her chest-puffing verse over the glitched out beat and as a closer, BBY Canis slam dunks the song with her not-so-thinly veiled threats about shooting you if you get too close. If a The Face-reading, popper-sniffing Pxssy Palace-attending merchant hasn’t put you on this tune in the smoking area of Shoreditch House; then well I’m surprised because they should’ve.

Anyone following the U.K. underground scene knows P from Lee is a force to be reckoned with so when he announced the Plant Tape with Ru via Instagram, I naturally kept tabs.

The Ammi Boyz co-founder gained his position as Ammi Boyz’s consignerie. Granted, he wasn’t the frontman like Nigz TG but his Blue Borough entrusted authority bled throughout his lyrics and his presence was unavoidable throughout sample-heavy underground hits like “Zebadee”. After Ammi Boyz disbanded, his solo career took off while releasing mixtapes like Tour Guide and I’m P From Lee and he held his own in collaborations with Capo Lee, SL and Novelist.

The leading single “600 Grams” is basically Plantasia meets Get Rich or Get Recalled. The song blooms with low-end synths, chime bells and a crazy piano solo before leading into P’s verse. The Lewisham-based rapper sounds more charged than he’s ever been as he starts the verse in typical P from Lee fashion. “I can do a headline show with 600 fans, P’s on the block with 600 grams” triumphant over the airy beat.

With P’s love for a different kind of plant and Ru’s curiosity in plant music; it’s an 8-track serving of songs for the strong and silent types, bookended with an electronic ambient atmosphere which also takes cues from cloud rap, road rap and trap. In the digital age where it can feel like you have to be a social media marketer to moonlight as an artist; P and Ru show there’s a different desire path in place and ended up creating one of the most intriguing rap mixtapes to come out this year.

Young Smokes: “Ok class, are you all ready to learn some piano 101?”

Dave: *takes notebook and pen out*

I begged Jeff Weiss to let me put this song in the column without having to do a write-up on it. Sometimes, you just gotta watch the video and appreciate the Brummie masterpiece fr.

Kembe X Delivers "I Was Depressed Until I Made This" LP