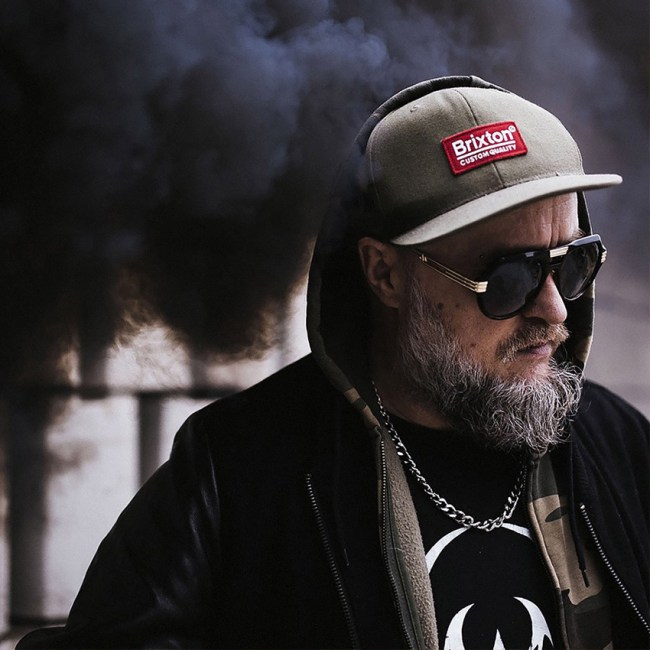 Who the fuck playing like the brand isn’t strong? Show your support by subscribing to the Passion of the Weiss Patreon.

If the past 18 months haven’t sapped you of all empathy, spare a thought for your favorite touring artist. Beyond the three-ring circus of lockdowns, government incompetence, paranoia and death that we’ve all dealt with, the sudden cancelation of shows and the uncertainty surrounding their return makes for an extra level of anxiety among artists, one raising existential questions surrounding the sustainability of their livelihood. Can I keep doing this? Should I? And if I do, what’s the point?

Kevin Martin’s latest album as The Bug answers these questions in two vastly different ways. Most obviously, the album is book-ended by two ambient poems by longtime affiliate and T.S. Eliot Prize winner Roger Robinson. Dealing with government overreach and the mass loss of loved ones respectively, they nudge our current, boring dystopia ever so slightly towards the true apocalypse that it feels like in our minds. It’s the 12 tracks in between however, that give us The Bug’s real reason for soldiering on in what seems like a hopeless world: the sheer, physical catharsis of experiencing extremely loud music in the presence of others.

This dedication to the spiritual power of sound system music has long been The Bug’s guiding light. While best known for London Zoo, a towering statement merging dubstep and grime to industrial dancehall right as the first two genres were coming into their own, Kevin Martin’s interest in the power of that intersection both predated and has long outlasted the 2008 zeitgeist. 2003’s Pressure leaned heavily on the dancehall and noise sides of the equation, while Angels And Devils’ A-side/B-side divide provided some distance from the dubstep bros everybody was shaking off early last decade. Yet for all of their differences, what unites these projects is the staggering physicality of the music, and the intensity and rawness of the vocal performances, courtesy of an ever-growing cadre of trusted collaborators. In this light, Fire might be the buggiest Bug album yet – a celebration of loudness, bass, intensity and the human voice for its own sake.

This makes writing a Bug review an oddly abstract dance about particularly menacing architecture. No matter how many words I write about say, “Pressure” with longstanding partner-in-crime Flowdan, they’ll pale in comparison to actually hearing the track on a gigantic, preferably home-made rig, in a packed venue. You’ll either lose your shit or run away screaming in terror, probably for some anonymous meat market pumping ‘tropical house.’ Barring the opener and closer, every single track goes for the jugular, whether featuring Moor Mother’s afro-futurist prophecies, Manga’s high speed slang, or dancehall/UK Hip Hop legend Daddy Freddy’s party starting weed chat. If you’re not buying what The Bug’s selling, that can make Fire seem one note, but I’d more generously call the project extremely focused, particularly given that Kevin Martin’s excellent non-Bug projects this year have largely orbited around more abstract styles.

The plethora of outside opportunities for Martin to explore his sprawling musical interests consequently allows Fire to focus strictly on banger after banger, with the form adapting into the function. This time around, the soundscapes floating behind the drums and bass are a little more corroded and haunting, the result of a master finding new spaces to explore, but the album is ultimately an unapologetic collection of tunes meant to be played loudly for devoted fans and unsuspecting interlopers with the potential to be radicalized towards sonic terrorism. Nothing here scans as ‘dance music’ from an industry perspective, but I dare you not to contort your body in wild shapes when you hear it.

Coincidentally, Fire arrives amidst a mini resurgence of artists impacted by foundational London nightclub FWD. Former Hyperdub signees LV just released a fantastic album (and equally fantastic dub version) with poet Joshua Idehen that explores the despair of living in a London that no longer feels welcoming. Skull Disco cofounder Appleblim meanwhile, recently dropped an excellent collection of dub-influenced Techno, while his former partner in crime Shackleton is about to release his first solo project in years. Even Skream has promised some new Dubstep for the faithful. In this light, Fire’s pandemic reflections and post-pandemic bangers feels like the tip of the spear: a potent reminder that much of the best (so called) dance music that the UK and Europe have produced has always been more concerned by the city and its shadows than packed rooms at corporate events. And yet today as in 2008, The Bug still stands apart – cranking the intensity far beyond that of his peers, to reach a transcendence through the sheer power of sound. I can only hope we can experience it live again, sooner than later.