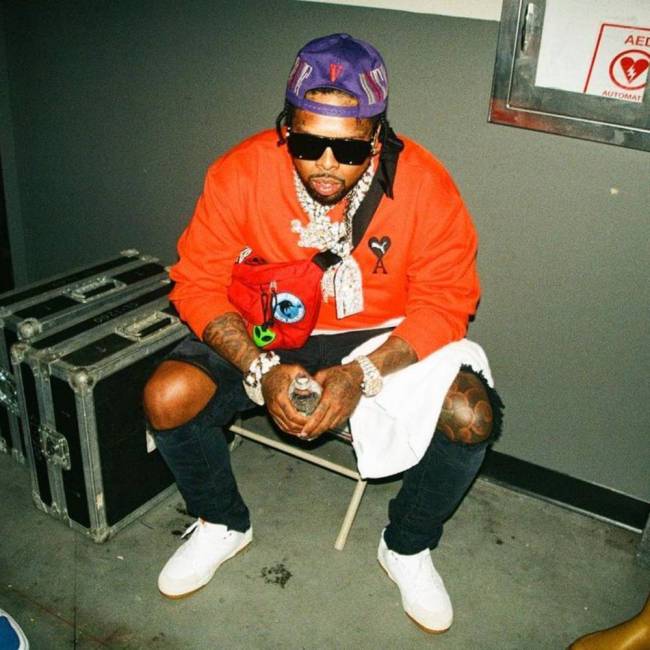 Pete Tosiello would prefer a reality where you don’t decapitate a journalist with a bonesaw and get rewarded with a fist bump from the leader of the free world.

Westside Gunn’s been on his “I’m not a rapper, I’m a curator” shit for a while now, which has made for predictably diminishing returns. There’s a level of ubiquity — when celebrity eclipses a body of work — where a holding pattern becomes all but inevitable. So we’ve gotten records like 2020’s Who Made the Sunshine and 2021’s HWH8: competent, star-studded affairs with an empty-calorie, treading-water aftertaste. He squeezes Tyler and Joey Bada$$ onto songs with Billie Essco, because he can; he commissions a minute-long Slick Rick verse, a commodity so precious it assumes a voyeuristic, fishbowl quality, like seeing the Temptations pull into Foxwoods for the Motown revue.

There’s nothing wrong with these records, erratic tinkerings from an artist obsessed with supply and demand. Still, there’s a creeping sense he’s run low on ideas or overplayed his hand. Gunn aspires to be a Drake- or Virgil-level influencer, a tastemaker who defines cultural moments while evoking high-fashion exclusivity. Yet his influence is tethered to the provision of neo-boom bap records for straight men in their forties, to the fact that he raps like the offspring of AZ and Fizzy Womack. To his credit, Gunn created a legitimate speculators’ market for Camoflauge Monk beats and Jae Skeese verses. No one considers this stuff avant-garde.

I’m not sure where we go from here. The Warhol-ification of tri-state rap by middle-aged men in distressed jeans is one of the stranger disruptions of my lifetime; I expect the aftershocks will resonate for a while. But perhaps it’s worth considering how we got here. Gunn’s early period — the stretch spanning Flygod through Supreme Blientele — is defined by brutal homage, the compression of resplendent East Coast masterworks into bare loops and ad-libs. He wasn’t ever going to make a Mobb Deep or a Roc Marci album, not on his budget, but he wasn’t that type of writer anyway. The early Griselda tapes are buoyed by an overachieving affect bordering on caricature. Who were these Rust Belt goons to assume the mantle of New York rap?

By 2018, they’d achieved a suffusion of sorts — no need to play around with knockoff Premier beats when you can buy the real thing. But with increased resources came a flagging sense of purpose. On Flygod, Gunn was reaching for a sound beyond his grasp, which led him on weird detours through uncharted waters. Now when he emulates the masters, there’s a leavened Instagram quality: abstract expressionists and high-couture trademarks can always be reduced to line items on an invoice. A Slick Rick verse is proof that even legends can be had for the right price. If Gunn can’t replicate the nuances, he outsources the dirty work to someone who can.

Purportedly the result of a 48-hour recording marathon, Peace “Fly” God — emphasis his — is the purest distillation of his curator approach to date, landing somewhere between a work-for-hire and a ‘60s jazz collaboration. Gunn splits mic duties with Estee Nack and Stove God Cooks, cult favorites who’ve outpaced Griselda at their own game. Nack and Stove are more compelling rappers than WSG — more precise linguists, more evocative stylists — but they’re eager for the co-sign, which makes for a power imbalance. Where it might have been a torch-passing moment, it’s instead a bit vulturine: Gunn is, quite notably, the only credited artist on streaming. One imagines him hovering in the control room, nodding along in a pair of sunglasses while Stove and Nack scribble verses against the clock.

If Griselda rewrote the book on high-priced street rhymes, Nack and Stove are their Bizarro World parallels, warping the medium into funhouse-mirror extremes. They rap more like comic book villains than neighborhood dudes; Stove’s work can be interpreted as a campy sendup of Benny and Conway’s rags-to-riches tales. WSG’s music has always subsisted on contrasts, and Stove doesn’t steal the spotlight so much as hold it at gunpoint. On Peace “Fly” God, he squawks and warbles like a half-cocked preacher, making a burlesque of the somber soul samples.

Four minutes into “Jesus Crack,” Don Carrera’s drumless instrumental is switched out for a clip of Brand Nubian’s “Slow Down,” the holy grail of fake-righteous Five Percenter sermonizing; Grand Puba exhorts us to wear condoms rather than risk disease and our bank accounts. Just as suddenly, Stove bursts in like the Kool-Aid Man: “So God so loved the world, he gave us cocaine!” Stove’s every breath makes a farce of Puba’s conscious-rap schtick. Who has time for rubbers when there’s weight to move?

There’s a Kanye-ish quality to WSG’s director turn. Lesser-known guests reflect his impeccable taste; the best way to showcase talent is giving it space to shine. Yet for all the collaborative spontaneity, there’s an enigmatic joylessness to the whole affair. Gunn knows this sort of free-wheeling, formally expansive project bestows cachet, that MF Doom is a legend and Ali Vegas isn’t. But landing a couple Madlib beats doesn’t make you MF Doom. It must be said there’s precedent for all of this — Pete Rock and RZA’s evocative interludes, Lib and Dilla’s barely-disguised crate-digging, a capella freestyles slotted between tracks like found footage. Peace “Fly” God is direct-to-consumer fan service, like an Expendables sequel.

I think there’s a certain brilliance there — but when you farm out the creative work to a corps of b-list genre artists, that’s not “museum rap,” it’s a DJ Khaled album. WSG is eager to flaunt his distinguished palate, but mostly he follows the algorithm. Estee Nack was doing tracks with Killah Priest and Roc Marci way back in 2013; Gunn had never heard of him until two years ago. Mississippi native Don Carrera handles the bulk of the production on Peace “Fly” God, and “Ritz Barlton” is as good as any of Madlib’s work here. Still, these are extremely Westside Gunn Type Beats. Influencers don’t get plaques in museums.

So perhaps it’s unfair to judge Peace “Fly” God by its ideas or lack thereof. As a survey course it leaves little to be desired, celebrating a vibrant scene with a clear statement of values. At this point, Master P is a better analogue than Drake. Like Gunn, P was a middle American entrepreneur, selling DIY tapes hand-to-hand until the broader world took notice. Critically, he didn’t harbor any illusions about his art, flipping Isley Brothers and Marvin Gaye samples into songs about roadies and upmarket passenger trucks. Gunn and P each operate like a mergers-and-acquisitions department: pump enough money and A-list endorsements into your assembly line, and chances are you can disguise any flaws in the output.

We Know the Truth: A Letter From Kellz

Eminem Shares Alfred Hitchcock Origins Of ‘Music To Be Murdered By’