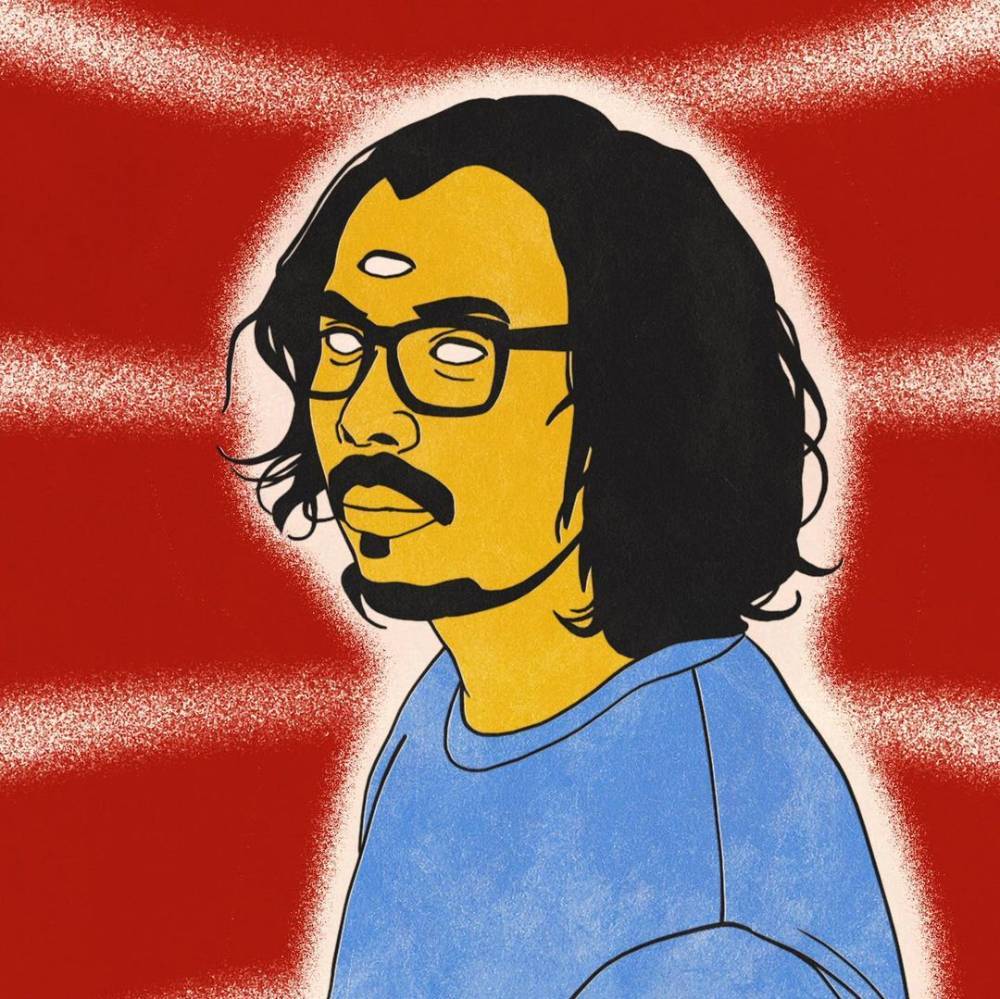 Image via Free the Robots/Instagram

Chris Daly is not a fan of “street corn popcorn.”

Chris Alfaro has had an interesting past few years. The L.A. beat scene staple better known as Free the Robots, first made his name at Lincoln Heights’ legendary beat scene night, The Low End Theory, displaying face-melting beats alongside luminaries like Flying Lotus, Nosaj Thing, and Teebs. Just an hour south, he helped found The Crosby, one of the most important music venues in recent Orange County history. And then, like the rest of the world, he found himself trapped in a worldwide pandemic.

Dealing with this new reality, he did what many artists did: created music that reflected the perilous landscape in which he found himself. The Cali native, however, found himself in circumstances most of us did not, namely trapped in the Phillippines, an island that benefited from geographical isolation and allowed him and some friends to break loosely imposed protocols to catch some tasty waves from time to time. Lest you think it all was nothing but good times, however, the class five typhoon that hit his home base last December should set the record straight.

On his latest album, Kaduwa, the underground hip-hop/jazz/psychedelia/electronica producer provides a companion piece to 2019’s DATU – which also found influence in the archipelagic nation by utilizing local samples and nature sounds – to breathe new life into his blend of live instruments, groovy samples, and hard hitting percussion.

Due to the realities of a worldwide pandemic, FtR found himself without his usual, full array of electronic toys, forcing him to take a more minimalist approach (though you’d be hard pressed to know by the lushness of the tracks here). As is his way, FtR beautifully marries various dance/electronica genres into a joyous, machine-like syrup that swims between the currents of deep introspection and shake-your-ass good times. Whether sitting alone on the El contemplating life or finally getting back into the live music scene, Kaduwa has you covered.

Our own Chris Daly recently had an email back-and-forth with the artist to discuss the new album, island life and what FtR wants listeners to take away from the album.

Talk to me about Siargao. I assume you have family and crew there, but what is it about the island that appeals to you?

FtR: The lifestyle Siargao is simple. I don’t have much, but I really don’t need much to satisfy my days. Island living is easy and affordable to live a more positive lifestyle with focus on important things like health, creativity, and contributing to this tight knit community. The ability to slow down and enjoy the overall quality of life is what I’m drawn to. Living by the sea around great people, endless activities, great food and having the freedom to do whatever, whenever is why I call this place home.

You were headed there to start a new artist compound just before the world shut down for COVID, essentially locking you down there, correct?

FtR: I originally came to this island at the end of an Asia tour in 2018 for a quick surf vacation before heading home. Long story short, I took an unpaid DJ gig for fun, fell in love with this place and decided to go in on a plot land with some friends I had met out here. We developed what is now the creative/ surf compound, Alima. Since 2018 I’ve been returning once or twice a year to overlook the progress; most recently in 2020. The lockdown happened, and 3 months into the pandemic I became a homeowner. Almost 3 years later I’m still here.

Were you a stranger in a strange land or was it more a return home kind of thing? Or did being locked down blur those lines?

FtR: I instantly found my place here since my first visit, and every time I returned it was like coming home. The lockdown was really just an opportunity to hit the reset button. I quit drinking, moved to a remote homestay near a secluded beach, and focused on finishing Kaduwa in solitude during the early days of the pandemic.

How goes the compound?

FtR: We were recently hit by the category 5 Typhoon Odette, which is pretty much the worst it could get. After surviving our own apocalypse, the compound remained fairly intact. Other than our roofs being ripped off, our structures were solid. 6 months after the typhoon we’ve pretty much rebuilt it and are back to normal. Other than being our homes / studios where we work on projects and surf when it’s good, we are a homestay with rooms for rent. Holler if you make it to Siargao. 🙂

While practically every single artist on the planet was impacted in some way, shape or form by the pandemic, I’ve found it interesting to learn how it affected artists personally. Some leaned into the sense of isolation and panic, while others seemingly found it to be a somewhat freeing experience. Based on what I interpret as an overall upbeat and joyous sound on Kaduwa, further evidenced by sunny tracks like “Flowers” and “Listen Up,” I have to imagine it wasn’t completely soul crushing for you, but you tell me how you’ve been since the Before Times.

FtR: It was strange to be away from Los Angeles and my music community during such an intense time. In an instant, we lost that energy we had all built so strong over the years, and I was on the other side of the globe too sketched out to fly back. The faster I accepted the fact that where I am, is where I’ll stay till this is all over, the better. That’s what I did. I can see now that staying here was the best choice for me because after the early panic of the pandemic, we on the island realized we are actually pretty safe and isolated here. The local government had to follow some protocols, but rules and enforcement was pretty relaxed. I was still able to get outside and exercise. We were still able to sneak secret surf sessions in at empty breaks. Things were generally chill and it allowed me to focus on music 100%. I’ve made more music during the pandemic than I ever have prior to this.

Let’s get into KaduwaThe press notes describe it as “honor(ing) the country that became his pandemic refuge.” Tracks like “Aswang” and the titular joint with Teebs seem the more obvious examples here, but what else about this album speaks to your Filipino roots?

FtR: Ever since my last concept album, DATU which was also fully recorded in Siargao, I’ve just generally been interested in the ancient hidden stories of my culture. I would actually give the DATU album more representative of this homage to my roots, but recording that album also changed my approach to music in general. Kaduwa being the follow up, elements of DATU found its way into my recording process and will forever be present in my music from here on out.

Let’s get into KaduwaI’d argue part of your (and the album’s) brilliance lies in your deep crates and ear for otherwise unknown samples. Did you cop more local tunes for this one? Or was it more of just an overall vibe kind of thing?

FtR: Kaduwa is actually my least sampled album. The samples I did use were mainly drums or pretty obscure melodies flipped in my own way. The majority of the album is made up of original compositions, but also collaborations with guests on certain tracks.

Beyond the homage angle, what is the album “about?”

FtR: The true beginnings of this album stemmed from after the closing of The Crosby (my old bar, restaurant, venue). I was a mentally, physically and emotionally lost at the time, after about 8 years in the business. Still, I continued to tour as Free the Robots. But with this new freedom from the restaurant responsibilities, I started to just extend tours into international solo living situations. I wanted to see where my mind would go in different environments, around different people, away from the comfort zone and familiarity of my home and studio. The direction of the album represents the freedom and life changes I experienced as a wanderer, post Crosby era till now.

Again, beyond “I was locked down and didn’t have anything better to do,” what inspired you for this one?

FtR: I may have finished Kaduwa on lockdown in the island, but it was actually in the works over the course of the last 7 years. I have been jabbing at this body of work and it eventually manifested as this album, mainly between my time living in Barcelona, Los Angeles and Siargao Island. I’ve got endless hours of bsides and unfinished tracks that I’m sure will eventually turn into something else from these sessions.

Any particular books/movies/shows that kept your creative juices flowing?

FtR: This span of the Kaduwa years has seen way too much change between extremes for me to digest new information. I spent most of my entertainment time rewatching classics that I’ve been into. I read a good amount, but accessible books in the Philippines are limited. Currently in rotation are Michael Pollan: How to change your mind, some Robert Greene, some Chuck Palahniuk, and the Marvel comics that my friend Jan slides to me when he’s done with them.

What do you want the listener to take away from the album?

FtR: Just to keep an open mind for the wandering directions it goes in. I was a wanderer in a lot of different places, physically and mentally during the recording process and each track tells that story.

In your mind, is this driving around town at 1 am music, contemplative bike ride tracks, robotic dance floor grooves or something else entirely?

FtR: It’s kind of all of this into one, but the way it was recorded, I’d say it’s good for traveling.

FtR: It’s a tough one because I feel connected to every track individually representing a different mood. Currently as of this second it would have to be “Outta Sight.” Recently things have been feeling generally positive. After bouncing back from the Typhoon, watching the community come back together, and the pandemic easing up a bit, I’ve been more on an upbeat vibe. If this continues, expect more dance floor grooves in the future.

When your inevitable greatest hits montage is produced, which tracks from Kaduwa are making the final cut?

FtR: This one is even harder to answer lol. I guess I’ll know when the audience responds to it.

A very quick Googling didn’t show any upcoming tour plans, but one site also directed me to your MySpace page, so I’ll just ask you directly if you’re hitting the road anytime soon?

FtR: I’ve been on the island for almost 3 years now so I’ve been disconnected to what’s been going on with shows and touring. It looks like little by little venues are starting to open back up, and festivals are happening again so we’ll see what happens after the album releases. For now I decided to keep it local and have my album release party at my favorite neighborhood bar called Manu.

As I ask every artist, who else are you listening to/reading/watching right now? Bonus points for shining the spotlight on someone you think isn’t getting enough love in the wider world.

FtR: Certain artists just circle back in my rotation and lately I’ve been back on discography and genre binges anywhere from Cocteau Twins to Alice Coltrane, Black Jazz Records, and I’ve been strangely into Japanese city pop. Some recent discoveries include Kit Sebastian, Molly Lewis, Penrose records bands etc. are also in the current rotation.

It’s Pretty Clear That Big Daddy Kane Vs. KRS-One is the Next ‘Verzuz’ Matchup