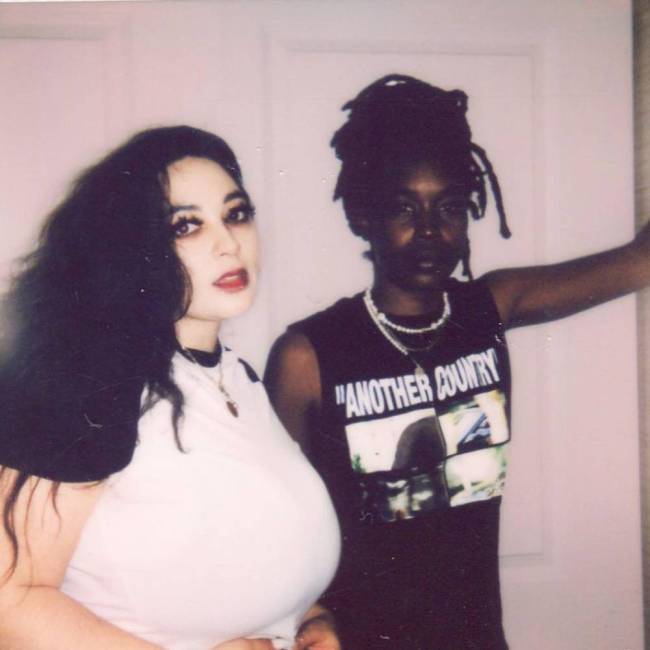 At the beginning of Moor Mother and DJ Haram’s new album as 700 Bliss, a cartoon-y humanoid parrot from a 40’s Disney cartoon-sounding sample says “blow a little smoke in the atmosphere,” to which Moor Mother adds “Let me tell you something here, all the heterosexuals want to be queer. Shut your lips, you’re burning my ear. What are you even doing over here? Don’t believe in time but this is my year.” And that folks, is 700 Bliss.

Philadelphia’s Moor Mother is one of the most creative and unique electronic, noise, and jazz musicians around; DJ Haram is one of the most innovative and interesting dance music DJs and producers around; when they’re together as 700 Bliss they’re sharpening their drums to smack harder, and their pens to stab with piercing force. While opener “Nothing to Declare” hits with a bird-dropping 808 bass and rattling drums, the fun of their albums is that they run through the gamut of electronic music – from techno to synth punk to hyper noisy breakbeat, to synth-pop. Yet it’s always hypnotically cryptic, and explicitly political.

The deep, soulful, house godfather, Mr. Larry Heard aka Mr. Fingers is back and he’s here to proclaim on high like Marvin, that there’s “Something Going On” in America, and it’s bad. We feel you, Mr. Heard. Where some of Heard’s more recent stuff has sounded a little too close to W Hotel spa music for my taste, this track, with it’s bulbous and funky bass line, congo percussion accompaniment, and Heard’s restrained vocals chronicling the list of ills of the world over thoughtful jazzy piano chords and a gentle sweeping synth, sounds cool as hell and more than a little bit reminiscent of Heard’s early work with his group, deep house pioneers Fingers Inc. If you’re DJing a socially-conscious beach party in either Miami or Ibiza for an over-30 crowd at a bar that serves margaritas, this track would be perfect to throw on.

If you haven’t met your daily footwork/juke needs for the day, may I suggest listening to Chicago’s very own Djpjmadedistrack’s new banger “Camera”? It’s got everything you need, those classic ricocheting footwork drums with neck-snapping snares and deep thudding bass, a repetitive, nasty, vocal sample – this time a male voice saying “bounce that booty for the camera” and a female voice responding “I’m juking.” As an added bonus, it offers the occasional classic cheesy dinging cowbell sound from an old school 808 drum machine. In other words, it’s perfect.

Cheesy and obvious point, but being adrift in the deluge of never ending violence and chaos coming from every direction in life fucking sucks. Anchoring yourself to friends, family, a community, and not setting a drift downstream on that deluge sometimes feels like the only way to protect yourself and each other. And if you can play an instrument, or make some type of art with a group of people, sometimes that feels even better. Art not for money, not for clout, art not even necessarily of any overt political or socio-commentary purposes, just art to connect with other people as human beings, and not as disposable units of cannon fodder, feels cathartic and humanizing in a world that dehumanizes people.

To the point, Joe Rainey is a singer and producer from Minneapolis, a member of the Red Lake Nation of Ojibwe people who grew up singing and drumming in drum groups in Ojibwe and intertribal community events. He’s also an extensive archivist and field recorder of Native American pow wow music. Rainey uses some of those recordings of persistent, deep, group drums and powerful, full throated individual and group singing on Niineta and adds swirls of electronic ambient synth sounds, clanging metallic percussion, spoken word vocal snippets, thumping 808 bass, and cinematic strings and piano to create a totally unique sound.

Produced by Andrew Broder of the band Fog and released on 37d03d, Justin Vernon from Bon Iver and Aaron and Bryce Dessner from the National’s label, Rainey’s musical aesthetic shares some resemblance, especially in the way the album is mixed, to the folky-sample-robot-cheesy cinematic R&B of Bon Iver’s more recent music. But the emotional resonance that Rainey hits and sometimes just hints at, is something special. The album starts with a recording of Rainey’s cousin, Mike Rainey, belting out his soul from behind jailhouse bars through a distorted prison phone, which immediately moves into “b.e. son,” where Mike’s song is lifted up by Joe – followed by a chorus of singers returning his voice, his art, his song, back into the community and into the future. It reminded me of the title of Nick Este’s book about the history of Indigenous resistance, Our History is the Future.

Sam Gendel is one of the country’s most innovative and unique jazz musicians, Antonia Cytrynowicz, the younger sister of Gendel’s partner, was 11 years old at the time of the recording of Live a Little, which was apparently recorded in one night and totally based on Cytrynowicz’s improvised melodies and lyrics (with later overdubs adding more instrumentation by Gendel). For real? The melodies that Cytrynowicz came up, and her voice, are nocturnal, jazzy, subdued (she’s not belting stuff out here) and just a little touch of unsettling – like David Lynch’s cadre of female singers meets Julie London.  Gendel adds an appropriately janky sounding keyboard, and sometimes acoustic guitar, to back her up, with touches of electronic burble, vintage sounding drum machines, and longingly expressive sax lines to accompany Cytrynowicz’s wise beyond her years, maybe even creepily mature, lyrics. Whatever it is, Live a Little, definitely feels like two people in a room together, making music, figuring it out.

Kampala, Uganda’s Nyege Nyege Tapes continues their nonstop parade of amazing releases. On this one, Ama Gogela from the Durban, South Africa gqom leftist activist group/band Phelimuncasi, uses the ice cold thudding persistence of gqom rhythms, They trade raps, infuse spoken word, and call and response verses back and forth, immersed in, and surrounded by washes of bubbling and wailing sound effects, noise and rumbling bass, sometimes in snatches of English but mostly in the isiZulu language. These are (apparently) politically charged lyrics meant to engage people where they’re at, dancing on the dancefloor to some seriously hard hitting rhythms. It will hit you in your chest.

If anybody has English translations of Phelimuncasi’s lyrics, please let me know. I want to know what Victor Jara putting it down on the dancefloor is like on paper. For now though, it’s amazing to know that Phelimuncasi are fighting the good fight in clubs and parties around Durban with monstrous rhythms.

Where to begin with Leroy? First, Leroy is a side project (alterego?) of New Jersey teen digipop sensation dltzk, who was showered in lavish praise and attention last year after releasing a pop-meets-noise-meets-drum and bass-meets-emo teen punk album called Frailty (old guy voice: “the internet, am I right?”).

As Leroy, dltzk created a genre they call “Dariacore,” after, yes, the MTV cartoon from the late 90’s. Dariacore is where dltzk, and now a legion of hyper online kids around the country, make full on assaults of EDM, digicore, drum and bass, New Jersey club music music, and sliced and diced and deep fried meme hyperactive music. Confused? That’s okay, take a listen. It’s fun and funny music that just sounds like a kid who’s really good at Fruityloops just fucking around and having fun on a pirated copy of the software. In fact, Dariacore doesn’t sound that much different that a lot of other hyperactive, noisy and old people-annoying music scenes around the world – like what’s going on in east Africa with the music being put out by Uganda’s Nyege Nyege Tapes. What makes this chapter of the Dariacore saga of albums that much different than the other ones? Not much, maybe the tracks are a little tighter than before, but that’s probably about it. It’s still loud, it’s still bratty and silly; it’s still a fun time if you give it a chance.