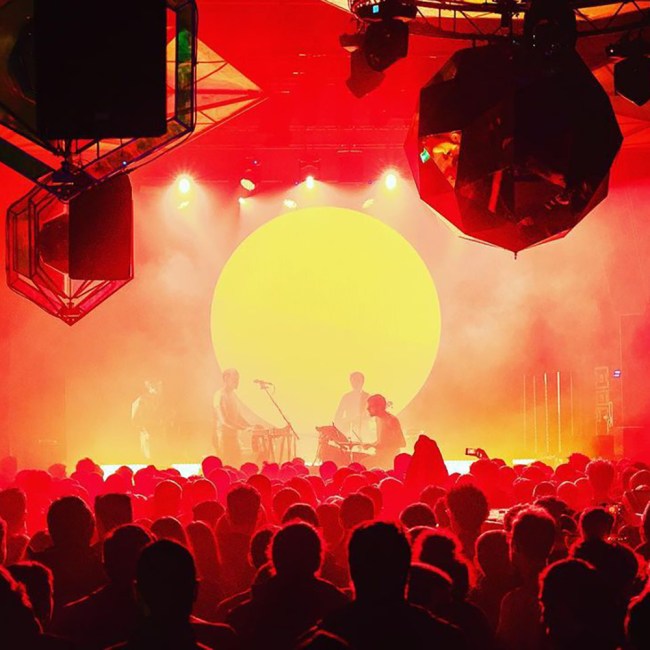 I try to keep the limited space I have to write, and the limited time readers have to read this column mostly clear of more mainstream artists so I can give smaller artists some shine and attention. As it is, a few months ago I wrestled with myself for writing about Four Tet and Burial. But it’s counterproductive to not talk about the proverbial elephants in the proverbial room. Two  of the biggest artists in the world, Drake and Beyonce, recently dropped their own versions of a “dance” album and a “dance” song respectively in Drake’s Honestly, Nevermind and Beyonce’s “Break My Soul.”

They’re both very fun, and I know the Drake album is categorized as dance music on streaming sites, but it’s really Drake music with amapiano, house, and touches of ballroom, Baltimore and Jersey club music, and even a little Soulection type sounds in the background. The Beyonce song is a fun resurrection of diva house greats like Martha Wash, but it’s Beyonce music with a diva house background beat. You know what I mean? In Drake’s case, the tracks on Honestly, Nevermind aren’t that dissimilar to tracks on previous Drake albums, this is just another further expansion of the Drake brand into a slightly wider territory. Throwing out the trawl to grab sounds and ideas from a wider expanse of the musical word to pull them into the gargantuan entity that is the Drake-osphere.

Even on probably the best and most musically ambitious song on the album, “Currents,” where a beat produced by the album’s executive producer, South African house hero Black Coffee, and Guatemalan-American, and Maryland native, producer Gordo, (tracing a lineage from Jersey and Baltimore club music, to New York City ballroom music, to South African house and amapiano,) the edges are so finely soldered that even the inventiveness of the ideas are smoothed out into something that basically sounds like a Drake song that could have been on any one of his previous projects. Which is kind of amazing. I can’t, and won’t hate on it.

I just hope that the Drake effect doesn’t distract people from checking out the artists and the history of the dance music scenes that Drake is adopting here. Will that happen? Probably not for a vast majority of people, but if a handful of the millions, if not billions, of people who listen to Honestly, Nevermind check out MikeQ, Cookie Kwawai, or Rod Lee, or hell Galcher Lustwerk, who’s perfected the rapping over deep house beats style, then is it worth it in the end? Whatever the answer may be, the Drake machine will move on to bluer waters soon enough.

As for Beyonce and Drake too, can y’all give some credit to Big Freedia already? Damn.

Speaking of good house music, here’s two new tracks that are as simple and enjoyable as deep house can be. Atlanta’s Byron the Aquarius is constantly putting out hot weather heavy deep house, but “Miss Dat Girl (Dub)” off his most recent album, the amazingly titled Shroomz, Guns and Roses, is particularly flushed. Channeling classic Fingers Inc balmy piano riffs, seductive synths, and head snapping snare with G-funk like Moog runs (and maybe even a nod to Frankie Knuckles in the bass line), “Miss Dat Girl (Dub)” is the platonic ideal of a deep house track.

Two-step U.K. garage music is probably the next genre to be used by big name artists, so start to familiarize yourself with it now and impress your friends. U.K. garage came out of American Todd Edwards’ experiments with speeding up soulful house records and creating his own intricate sample heavy, gospel and soul inflected house music, that made heavy use of vocal sample chopping, and often had a kind of galloping, jittery, rhythm.

When British DJs started playing Edwards’ records in London clubs, the sound spread and became a still prominent part of the U.K. dance music scene. There’s a couple of producers around the world now who still are messing around with the sound, including people like New York’s Swami Sound and Rio De Janeiro’s DJ LHC, and now Canada’s own Dan Snaith. Better known by his main music making alias, Caribou, where he makes indie pop inflected downtempo electronic music, but under his other music alias, Daphni, Snaith makes pretty straight ahead, solid dance music, like “Cloudy,” a perfectly tuned UK garage jam using a rolling piano riff, sparkling synth accompaniments, skippy garage drums, and a short vocal sample endlessly repeated throughout the track until you can swear you can decipher the clipped words. That’s when the track, and UK garage, has got you hooked.

For the past couple of years Mexican and Mexican-American folk artists put out by labels like Bell Gardens based Del Records and acts like Yahritza Y Su Esencia have been making acoustic ballads of heartbreak, emphasizing a few acoustic instruments and letting the singer’s voice and their lyrics sit starkly in the middle of the music. It’s surrounded by a vast ocean of empty space, perfect for somebody to remix. I did not expect somebody to remix them into a footwork track like Tuscon’s DVOID, using the alias Fastcar, did here though.

Using a sample from what sounds like a pretty recent Mexican-American folk song, DVOID adds the requisite skittering high hats, cracking snares, and chest thumping 808 bass of footwork music, and it really works. It makes sense too. Both styles of music play with stretching time by highlighting the space between two big musical events using silence and musical release from that silence, and DVOID really understands that. I hope they make more tracks like these, and they’re able to get on some remixes of Mexican-American corridos and help spread the gospel of footwork music, and the gospel of Mexican-American folk music to a wider audience at the same time.

Just to go back to this for a minute (because it’s funny), If Drake really wanted to embrace dance music, he should have hummed over some of the tracks on Domestic Jungle, an album of then sexagenerian British free jazz guitarist Derek Bailey screeching, scratching and freaking out over peak UK drum and bass tracks being played on pirate radio stations. In 1996 Bailey released a studio album of similar stuff called Guitar, Drum ‘N’ Bass with British drum and bass producer DJ Ninj, but Domestic Jungle is the lofi home recordings of Bailey just practicing guitar over drum and bass tracks that were the inspiration for the studio album. If you haven’t heard Bailey’s brand of guitar playing before just know that it’s not Wes Montogomery, or even Sonny Sharrock style free jazz, Bailey erratically plucks and strikes at his electric guitar, sounding alternatively like a toddler messing around with a guitar, and a very skilled guitarist having a bad LSD trip. It’s a hard sound to get into, but put between super distorted drum and bass tracks recorded off a pirate radio station, and re-recorded through a portable recorder, Bailey’s erratic, jagged, noisey, guitar somehow makes a lot more sense. And it still sounds fucking wild.

Tokyo’s CDR has been experimenting with combining the bombastic energy of drum and bass music with the fury of noise music for like two decades now, so it’s possible they might have heard Bailey’s Guitar, Drums N Bass. But whether that’s true or not, after listening to Domestic Jungle, listen to “Noise Fuck Mix” on CDR’s new project, Radiocassette Album, and tell me that there wasn’t at least some zeitgeist guiding these two artists from two different places to similar artistic conclusions.

The rest of the album veers away from blissteringly wild noise drum and bass music to video-gamey, 8-bit samples with prodding, pedestrian trip-hop or acid house, but every so often tracks burst open with spastic, speed up, glitchy, amen breaks, and everything is alright with the world as your enveloped in the noisy morass of super distorted, beautifully messy noise that ends too soon.

Earlier this year, Burial put out Antidawn, an album of eerie ambient music and snatches of gospel-like sound design that he compared to music for a imagined video game. Now Machine Girl, the wildly popular rave meets Soundcloud meets punk project of Long Islander Matt Stephenson, put out their own soundtrack to an actually realized video game called Neon White.

Machine Girl is probably one of the most popular underground electronic acts around now, mainly for brining a kind of DIY hardcore punk and noise music aesthetic to dance music and re-introducing rave and breakbeat music to hyper-online Soundcloud rap fans. Some of that sound is on this soundtrack, but only in traces. Mostly Neon White sounds like an amalgamation of classic late 90’s Sega, Playstation, and even arcade game music, like Tekken, using the sounds and idiom of 90’s ambient, rave, and drum and bass music.

There’s a couple of times when loud guitars come crashing through tracks, or particularly insistent Amen-style breaks burst through, but mostly things are kept pretty mellow and mid-tempo. The vibe is not seeing your friend’s electro-punk band at a sweaty basement show like some of Machine Girl’s previous albums, it’s more like playing Ridge Racer V with your date at your local Dixie cup designs purple carpeted arcade.

In the 80’s and into the 90’s synthesizers and electronic music was the sound of democratization for different movements across the world. At the end of Spain’s transition from fascist authoritarianism to democracy in the early ’80’s, Esplendor Geometrico were making angry and controversial industrial punk. Later in the 80’s, as the country started to crumble, Soviet kids like Notchnoi Prospekt were making dark and anti-social experimental synth music perfectly tuned to piss off Soviet bureaucrats. After the election of Nelson Mandela and the end of apartheid in South Africa in the mid-90’s, artists in Soweto like Arthur Mafokate started experimenting with synthesizers, drum machines and American house music – adding South African rhythms and lyrics about the anti-apartheid movement and politics to create kwaito music, the stylistic precursor to amapaino.

Apparently, that zeitgeist affected Peru too. Put out by the amazing diggers and archivists at Peruvian record label Buh Records, who have been on a noble quest to re-master and re-release old Peruvian electronic and experimental music, Sintomas de Techno is a compilation of Peruvian synth-punk made in the short decade between the end of Peru’s military dictatorship and the beginning of Albert Fujimori’s dictatorship.

The music sounds as jumpy and distorted and bass driven as nervous British post-punk, as dark, antisocial and grimey as Soviet darkwave, and as filled up with pent up rage expressed through growling electronics as early American synth punk like The Screamers and Suicide. It sounds like kids grasping for something, anything, in the middle of the nihilism of the horrifically bloody war between the Peruvian military and the insurgent communist guerrilla army The Shining Path as the foreboding dark cloud of brutal dictatorship looms around the corner. Hell, it sounds like the synth-punk being made today in the U.S. by people like L.A. ‘s N8NOFACE, who channels the same kind of grimy, distorted bass driven, synth-punk like the group T de Cobra do on the track “No, Nunca” on this compilation, to channel stories about the rage and violence of the systems of oppression keeping the underclass unseen, underfunded and unrepresented in the U.S.

Should we be concerned about the parallels? Maybe. Maybe we should listen to more synth-punk while we can.

“Is It Me or Society? I Can’t Tell:” Memphis Hip-Hop and the Slow Cancelation of the Future

Juice Wrld’s Girlfriend Breaks Her Silence On His Death