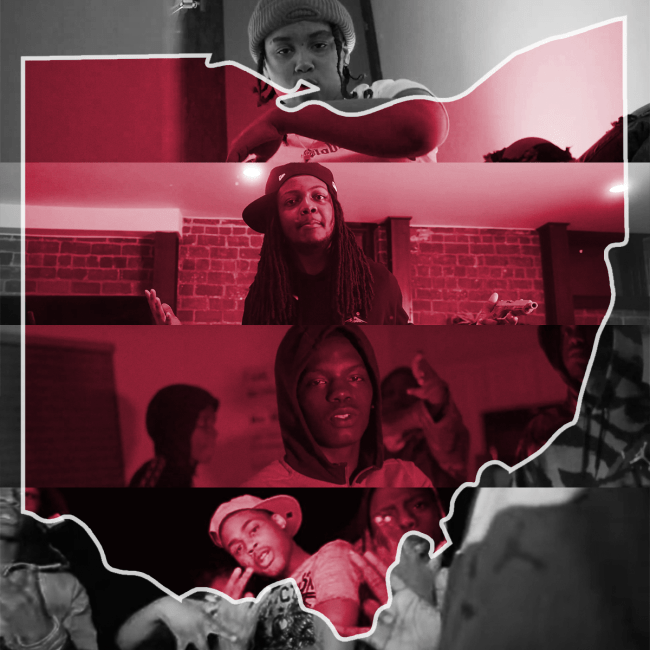 The only site on the world wide web that will put you on to the best Ohio hip-hop city-by-city without an ad or sponsored partner in sight. We do it for the love of the game, so support the best independent music journalism out by subscribing to Passion of the Weiss on Patreon.

Rappers are often like demigods in their cities. Some of the upper echelon of regional rap – the Dolph’s, Rio’s, and Durk’s of the world – are immortalized as they become a living facet of the collective identity of their homes. Their names and lyrics are spray-painted on walls, carved into desks, and scrawled into bathroom stalls across their cities, and if they break through, beyond. It’s as if there’s an invisible playlist that any individual city’s rap fans unconsciously organize. The legends echo at family barbecues, clubs, and miscellaneous functions, but the ones who don’t reach those heights can often fall through the cracks. Those unconscious playlists are mostly an “if you know, then you know” type of thing, but those outside of the region often don’t actually know. So being from Ohio, and hearing the state’s playlists in action, I chronicled some of them into a series of mixes, the first of which is a broad sampler that traces the through-lines between different cities.

Ohio doesn’t have any singular transcendent figure in recent memory, but there’s an array of disconnected rap scenes and local icons concentrated within the major cities. There are also a few examples of artists not bound by regional sounds – people like Messa and Zelly Ocho – who have created their own internet circles and operate outside of the interlocking bubbles of Ohio street rap.

Without the opportunities afforded to a more developed and organized music industry, crossover between areas remains mostly limited. Chewy Lo’s warbly pain pill grooves might dominate Toledo’s streets, but Dayton’s Prince J-Roc, who retools Sauce Walka’s lyrical liquidity and Yo Gotti’s aptitude for strip club anthems, operates in his own sphere. These smaller rap scenes run deep, and the snapshots of the artists and their worlds within them can feel lost in the sea of the internet.

From Cleveland to Cincinnati, each of the cities in Ohio has respective sounds emerging, and each draws from a rich history of its own. Suburbs stitch together scattered metropolises across the state, acting as connective tissue between Ohio’s vital organs of the former blue-collar behemoths. Local populations swell in the hundred-thousands, and dozens of networks of creatives exist through YouTube videographers, Instagram, or Soundcloud in the major hubs, creating these nebulous scenes. The roulette of fame divides these compartmentalized communities, haphazardly filtering shooting stars, sending the majority back into orbit, and the chosen few into the mainstream.

The circumstance Ohio rap exists in is not unlike the socio-economic purgatory ubiquitous to minorities in America. Ohio’s disenfranchised are subject to many of the same social phenomena and symptoms of oppression as their country folk- unequal education, dramatically shortened lifespans, barriers to intergenerational equity, and countless other hardships imperceptible. There’re a sickening number of statistics that ultimately relay the same information: America takes advantage of black people from the instant they’re born until they die. But beneath the immense, compounding pressure of second-class citizenship, diamonds are forged, taking the form of a rich and robust cultural tapestry.

To best explore Ohio’s cultural tapestries, the most digestible method is through mixes organized by each city’s videographers, YouTube compilations, Trillers, and archaic playlists from DatPiff to TheGoodOlDayz. Those mixes are a good introduction to some of the major cities and their musical dialects, but they often end up feeling like the end of the first Men in Black a lot of the time, where there’s some poorly animated green goober fumbling with his bag of marbles containing galaxies within them.

My first “Cross The O” mix traces across city lines to paint a more broad picture of the music from the state, as at a certain point, it feels necessary to draw a line from one artist’s ideas to another’s, or tie them into the bigger picture.

It includes guys like Rushhy Bandxz, who had the future of underground Cleveland in his hands circa 2016/2017. He’d hopped on plugg beats around the same time as UnoTheActivist, and worked closely with Chxpo pre and post-BMB. Rushhy’s sound began as a solid riff on Chief Keef-ology and culminated in his own distinct discipline therein. He was a speeding bullet, shorted by an 18-year bid at 18 years old, and you can still see his name plastered in the bio’s of real SoundCloud OG’s, and hear his influence on modern plugg. Free Rushhy. Then we have Columbus’ reinterpretations of the violent whimsy of rap from Flint, the variations of which are endless, but the short-list includes Tom & Jerry if they sold Spike, Holy Steppin, and distorted interpolations of Enrgy beats. Elsewhere, there’s The Jacka‘s heavy collaborators still rapping their asses off, Bay-area funk riffs, and a Black Kray acolyte. In short, it’s active.

This mix is a sporadic sampler with talent from Toledo to Cincinnati. It’s heavy on the aforementioned Columbus shit-talking and Akron’s echoes of Kodak Black, but also includes Atlanta-style lovers trap, and Toledo’s syrup-glazed embodiment of capital G Gangsters like Curren$y.

Wild For the Night: Khruangbin Tell Their Late Night Tales

Lizzo To Fat Shaming Critics: ‘I Just Want To Spread Love & These Cheeks!’