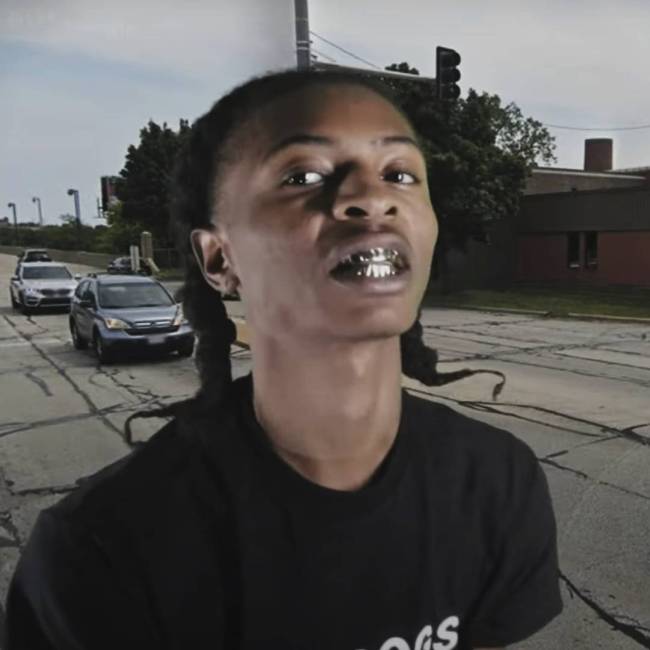 Be sure to read Harley Geffner‘s latest feature piece on the Baby Stone Gorillas for theLAnd.

The spirit of Flynt Flossy is strong with this one. Milwaukee’s Certified Trapper is part rapper, part comedian, and of course, part trapper. With YouTube vlogs like “I Got Surrounded by 1000 bees” where he runs around with an airplane neck pillow yelling about how fast the bees are, simple FL studio beats I could probably make that mostly have way too many Roland machine “ahh”s, and a torrid pace of about 10 music videos a week all filmed in the same poorly lit bedroom, Certified Trapper is maybe the funniest dude working right now. He’s got a gold grill gleaming smile, that he shows off like a dude who got three arm tattoos and positions himself in weird ways to make sure they’re all showing. In “Spin Back,” he finally takes a new approach and instead of filming the video in that same damn room, he goes with a green screen of a corner with a church, a random SRT, a flat tire, and an image of soldiers he pulled from google. His dances look like a kid who just learned how to use his arms and are so bad that they tip the scale into good. His raps are similarly on the “is this bad?” to “Oh wait this is fire,” scale, with bars about knocking hats off, his shmack that’ll leave you twitching, and lingo that makes no sense to the naked ear like his “slap joggy.”

It’s been upwards of ten years now that Mozzy has been putting out heart wrenching street tales with a sensei-level birdseye view of it all. His most recent tape, “Survivor’s Guilt,” is full of these testimonial anecdotes of his lifestyle and the tragic stakes that come with it, but Open Arms strikes a particularly poignant and sentimental nerve. The angelic choral welcomes you in with a heavenly “you took me in with open arms” as clergymen sway in front of a grave and Mozzy empties himself into his verse with a piercing set of bars to open:

It’s a powerful microcosm of our forever failing systems. I wish our political leaders and people who have influence over our budget priorities would listen to these types of tales from the ground to truly dissect some of the problems, rather than painting people from these areas as monsters and blaming scourges of gun violence on personal failures. Sure gun laws can help to some degree to stop mass shooters from easy access, but the vast majority of violence in the states is from handguns and interpersonal conflicts in low-income areas. What other systems can we put in place that will welcome young Black men with “open arms”? How can we redirect people away from the streets and all the heartbreak that comes with it? Maybe better afterschool programs and in-school supports for our poorest school districts would be a start.

TDE signee Doechii’s got some heavy weight swagger. Her style is Lil Mama’s Lip Gloss poppin’ with a militant step to it. Her flow is percussive, but the edges are rounded as each word glides into the next. And “Bitch I’m Nice,” is her statement piece to let you know that yeah, she’s nice as hell with it. She’s the biggest threat to your wife. She’s got guys kissing her rings. And she doesn’t care if you’ve got racks because that’s not her type. Real hot girl shit.

Rod Wave came up on his melodic and reflective raps, but the reflections on love, loneliness, and his early childhood life in Florida have turned a corner as he has new life experiences to reflect on. One of the great joys of fandom, and rap fandom particularly, is watching an artist progress as their material circumstances change, and their lyrical material changes with it. In Stone Rollin, Rod Wave’s on tour all over the U.S. and Mexico, going state to state, and still looking for a home. He’s thinking about his kids, with dreams of settling down somewhere by the beach, without the pains that led to his addictions. Dreaming big is great, and the power of rap is that Rod’s in a position to make those come true now.

Wallie The Sensei has been racking up singles with every major player in LA. His voice is really starting to become the voice of the city. First he had people screaming 03 Flow for a year straight, and now he’s got hooks planted everywhere. On the first here, he and Saviii take turns singing about their muscled up swagger and hitting flex dances with referential mentions to their mothers, as they get caught jacking something on a security cam then rap to the cam. And in the second, he and Compton’s YS have a blast out on the water while Wallie sings lovingly about reaching his goals while still in his white forces and YS even goes for it with the melodic autotune instead of his usual Michael Myers scary raps.

Joe Budden Celebrates Having No. 1 Spotify Podcast For 2019

12 New Albums You Should Listen To Right Now (Week Of Feb. 5)