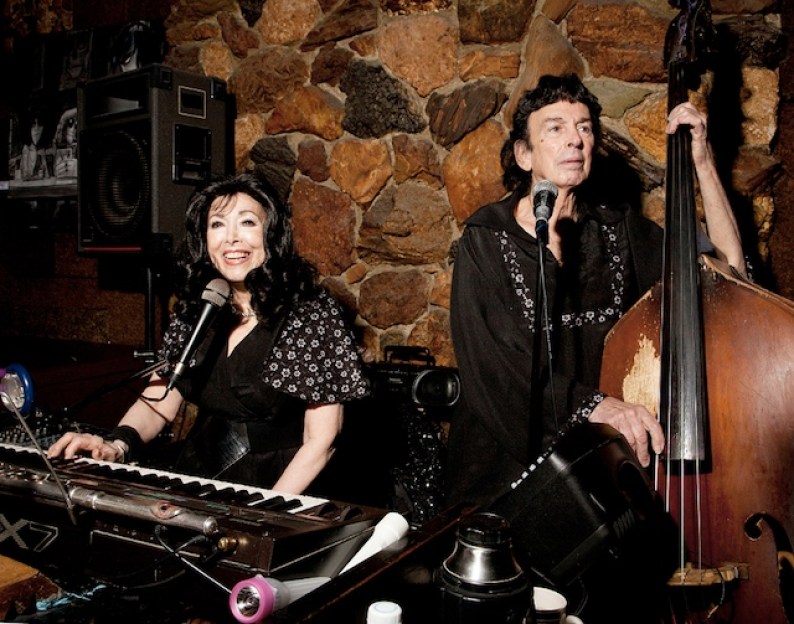 Photo courtesy of the Dresden

Originally published at a now dead alt-weekly in 2016

Jeff Weiss is pouring out a little Blood and Sand.

For a city with a million entertainment options, the L.A. tourist checklist can be streamlined with relative ease. There’s Griffith Park and the Observatory; your preferred beach and favorite taco spot; the Getty Museum or Villa; and a trip to the Dresden Room to sip a Blood & Sand and watch Marty and Elayne.

It’s a safe assertion that the sequined jumpsuit–clad married couple are the longest-running act in town. On Friday, April 1, they celebrate 35 years of riffing on the American songbook five nights a week at the Los Feliz bar. Their stint there has included surprise appearances from Flea and Nicolas Cage. As Julia Roberts delivered a spontaneous rendition of “Makin’ Whoopee,” Kiefer Sutherland bought a round for the entire bar.

“One night Flea sat in and we covered ‘Evil Ways.’ We got so carried away that there was a red haze and we couldn’t see the audience,” Elayne Roberts says, sparkling in a black and green jumpsuit that matches Marty’s. They sit together in a side room at the Dresden, a 62-year-old institution that looks as if Hugh Hefner converted it from a German war bunker into a Playboy Mansion grotto bar.

“Someone breakdanced, knocked the mic over and made a big bang,” Elayne continues. “Then Flea got on the mic and said, ‘When we play that primal stuff, anything can happen.’”

It’s 30 minutes before their 9 p.m. start time and people are slowly pouring through the door. On weekends, it’s as crowded as a rush-hour subway car in New York, the city where Marty Roberts was born, raised and acquired his accent. Elayne spent her early years in New Jersey before moving to Hollywood as a young child.

Despite their roots, Marty and Elayne are as old-school L.A. as orange groves. They’ve been immortalized in a Tom Petty video and for crooning “Stayin’ Alive” in Swingers. They’ve gone in and out of style so many times that somewhere along the way, they became timeless.

David Lynch walked in once and thanked them for bringing “jazz standards to a new generation.” He should’ve recruited them for a Mulholland Dr. cameo.

“You gotta love what you’re doing, the rest is bullshit,” Marty says, distilling his life philosophy to a sentence.

They first came together when a teenage Elayne put out a want ad for a drummer. “I found one, all right,” she deadpans.

The Hollywood High graduate’s résumé already included a stint accompanying Count Basie at a local nightclub. After she married Marty in 1974, the couple gigged at long-shuttered Sunset Strip lounges, in Las Vegas and Lake Tahoe, and at the Gene Autry Hotel in Palm Springs — where Frank Sinatra watched them perform one night.

After returning to L.A., the Valley Village residents started a residency at Michael’s, the swanky predecessor to the now-vanished Derby. One night the owner of the Dresden caught their act and offered them their future.

“Every night is an adventure,” Elayne says. “Anyone can walk in once those doors open. We’re just trying to make them happy.”

Their goal still remains as simple as when they started: Play jazz and make people smile. Thoughts of retirement are non-existent.

“I took an elevator ride once with Milton Berle and I said, ‘Milt, how you doing? I heard you’re gonna retire,’” Marty quips.