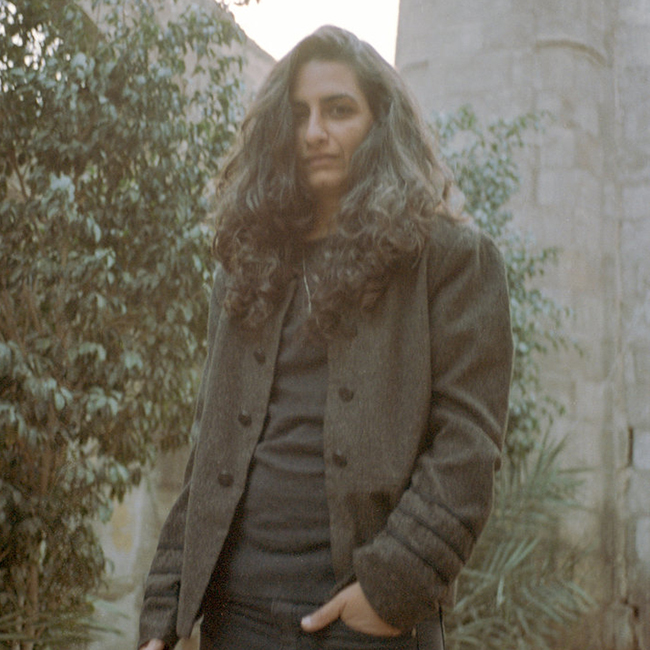 The best moments on Nancy Mounir’s new album are the quiet parts—and there are a lot of quiet parts. Warm organs hang in an eerie balance against a backdrop of record crackle. Century-old voices keen and warble like sinking ships, recounting tales of love and heartbreak from beyond the grave. A gentle pluck of contrabass or a minimal piano chord adds just the right bit of texture and sway to songs that otherwise follow nonstandard microtonal tunings and glacial, non-metered rhythms.

The album is called Nozhet El Nofous, which means “Promenade of the Souls” in Arabic. Mounir, a veteran of the indie music scene in Egypt, spends 34 minutes accompanying eight 78 RPM recordings from the turn of the 20th century, engaging in a kind of ethereal jam session with long-forgotten singers and theater stars from a rich period in Egyptian history known as the nahda (awakening or renaissance). Mounir’s collaborators are all given feature credits in the track listings, like guests on a rap album, but they work as equal partners as Mounir fills out stunning voices of the past with her own subdued counterpoint and ambient shadings.

The recordings Mounir draws from are full of distortion and decay—78 RPM records from the early 20th century were made of a shellac mixture, making them more brittle and prone to damage compared to modern vinyl. But the songs are bold and innovative. “Khaffif Khaffif” is remarkable for the non-binary leanings of century-old tarab singer Saleh Abdel Hay—who sings in an androgynous voice and tells a torrid tale of romance from a woman’s perspective—but it’s just as potent thanks to Mounir’s bass-heavy string arrangement and luminescent organ drones. “Baad El Esha” unfolds with impeccable grace: piano and flutes follow an intricate melody that interweaves between the free-flowing vocals of theater diva Mounira El Mahdeya. Later, as Fatma Serry promises revenge to a lover on “Ana Bes Saktalak,” her fluttering vocal ornamentations sound at once confident and full of despair over a swelling storm of plucked strings and wailing Theremin.

Plenty of artists and labels have been mining the past for new inspiration these days. Whether in the hands of Syrian beatmaker Hello Psychaleppo or ambient artists like The Caretaker and William Basinski, archival recordings often get snipped up for their hooks or warped out of shape to serve new ideas. There are also artists—and artistic authorities, like Egypt’s powerful musicians syndicate, which regulates musical goings-on in the country—who take the opposite approach, holding on tightly to musical heritage and condemning artists who break away from the mores of a rosier age.

What makes Mounir’s project unique is that it’s neither an act of deconstruction nor an exercise in nostalgia. She quotes from her ghostly collaborators in full, immersing herself in their creativity and passion. But she also adds her own thing—and the more I listen, the more it sounds like the past and present have merged together. Cairo’s Adham Zidan deserves credit for adding to this effect with his subtle studio mixing.

The ballad “Matkhafsh Aleyya” sounds like it could have beamed out of an antique radio—all the more so thanks to the delicate refrains and haunting violins added by modern hands. But the voice of Abdel Latif El Banna is crisp and clear, the desire unambiguous as (like Abdel Hay) he flips gender roles in his lyrics: “Don’t you worry about me / I’m a girl you can count on… I sit looking meek but my heart is preoccupied with you.” It’s a subversive passion that transcends time and space, which just goes to show that even after a hundred years, we’re all still yearning for the same things.

Dax Drops ‘I’ll Say It For You’ EP

John Singleton Reportedly In A Coma After Suffering Massive Stroke