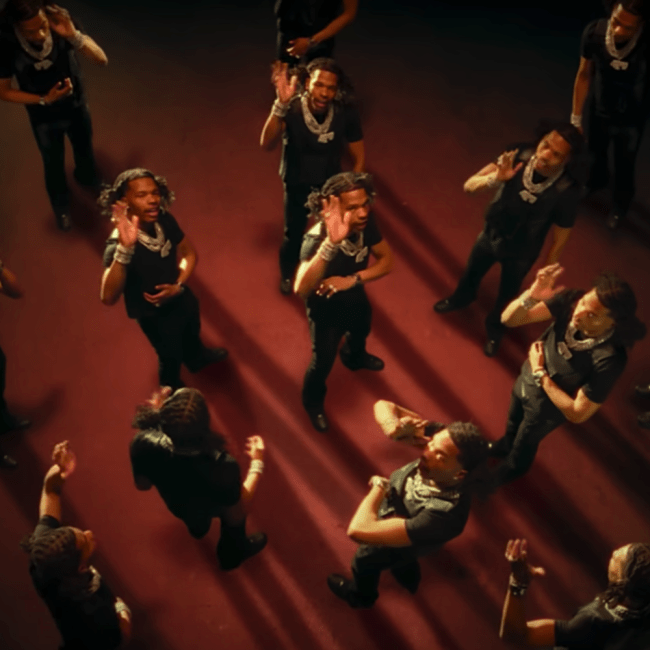 Will Hagle wants you to start your day off right with the essential shower mix.

In the last decade, Lil Baby has ascended to become one of the two most popular global emissaries of Atlanta rap. He’s perfected the post-Thug melodic flow over sparse, drum-forward production. Something like a more relatable and lighter 21 Savage, a more restrained Thug, a more accessible Future. While remaining quintessentially ATLien his lyrical approach also resonates far beyond his hometown. He can bar out like a less monotone Curren$y, a less humorous Wayne, a less regimented Kendrick. Lil Baby’s music is as palatable and digestible and universally beloved as lemon pepper wings.

If Atlanta is the epicenter of contemporary rap, it’s also the epicenter of a tragic event that recently upended its infrastructure. Young Thug and Gunna were arrested and denied bond. Now they await trial in a RICO case that alleges their label YSL is a criminal gang. Like many disasters, the root cause is not natural but human: a byproduct of American inequity and injustice. Atlanta has always been and remains a gravitational home to amazing musicians, but to worldwide audiences the city’s pop-rap output has shifted. With his two artistic mentors incarcerated, Lil Baby is one of the city’s two international superstars left (alongside Future).

Before I’m reprimanded for what I just said, or what I’m about to say, let me clarify: I believe that Lil Baby is one of the—if not the—best rapper(s) alive. I also hold a seemingly contradictory opinion in my head: he has never made a “great album.” At least not according to the antiquated standards by which we judge that artistic form.

Lil Baby recently released It’s Only Me, his third studio album on Quality Control. Over the course of five years with the label, Lil Baby’s mixtapes and two official studio LPs have objectively made him one of the—if not the—most popular rappers alive. He’s a Fortnite emote. A FIFA World Cup artist, performing at the opening ceremony. My Turn, bolstered by the same-year release of a (Deluxe Edition), was the most-streamed album of 2020. If you judge success via streaming service analytics like profiteering industry scumbags do, It’s Only Me is already another blockbuster.

As with My Turn and the first studio LP, 2018’s Harder Than Ever, It’s Only Me is an hour-long, tonally predictable playlist of new material, sprinkled with high-profile features and the occasional mega-hit. As an “album,” it’s not great. It’s too long, not thematically consistent, and has too many songs that sound the same. It doesn’t take risks. The sequencing isn’t meaningful.

Across the album, Lil Baby talks about how he’s the best without directly stating it: how he’s at the World Cup and therefore not in anyone else’s league, how he figured he might as well drop an album, how he has so much money he has houses he doesn’t use. This fits with the narrative that he fell into rap superstardom accidentally. The legend goes that Lil Baby was a weed dealer who hung around Quality Control studios long enough that Young Thug and the label’s founder, Coach K, encouraged him to start rapping. After his release from a prison stint in 2016, despite initial hesitation at the relative lack of funds he amassed performing early on compared to what he could make on the streets, he gave music an honest effort. Within a year, the buzz was deafening. By 2020, with protest-relevant songs like “The Bigger Picture” and “Emotionally Scarred,” his voice resonated. Two years later his skills are both refined and ingrained. He can put together a new hour of music with minimal thought, and the literal world will eat it up.

The problem with It’s Only Me as an album isn’t that the songs are not good, it’s that the combined product does not add up to standalone greatness bigger than its individual parts. “Not Finished” exemplifies the peak of Lil Baby’s ability: non-stop rapping that’s melodic but quick, gliding along on beat with up-tempo hi-hats. “Waterfall Flow” is another apt example, as are most of the tracks that can be selected from the list at random. In terms of song-by-song quality, the floor is high and the ceiling is low. It plays out in an above-average middle ground, which over the course of an hour grows stale with its repetition. In his Variety review, Brandon Yu pinpointed incisive examples of the album’s sameness, writing, “Here’s an exercise: to get a clear sense of the bloated laziness of the record, play the first couple seconds of these tracks in order: “Stand On It,” “Not Finished,” “Everything,” “Top Priority,” and “Danger.”” As a whole, as an “album,” this lack of sonic variance is a detriment.

When compared to the most commonly-cited “great albums,” or even contemporary releases like Kendrick Lamar’s Mr. Morale and the Big Steppers, or Open Mike Eagle’s Component System with the Auto Reverse, Lil Baby’s It’s Only Me does not attempt to meet the criteria most listeners should agree makes an album great. In addition to its one-note sound, the tracklist is not unskippable. Doesn’t demand to be played in order. You could argue that Lil Baby rapping about the same mundane topics over similar-sounding beats is thematically consistent, but it’s not ambitious. “In A Minute” and “Heyy” are catchy, but the hit rate is low considering the amount of songs. Brevity can often be an asset in this department. If an album has fewer songs, there’s a higher chance that they’re all great.

The songs with featured artist offer a couple rare moments of experimentation: an abrupt shift for Nardo Wick’s verse on “Pop Out” before shifting back for Baby, the Ying Yang whispers at the end of the Future-featuring “From Now On,” the tempo down-shift of Fridayy’s “Forever” and Jeremih’s “Stop Playin.” The 15 tracks Lil Baby carries on his own blend together like one long song. As the best rapper alive, Lil Baby’s vocals redeem every track. But they fail to elevate It’s Only Me as a singular entity.

If you think of It’s Only Me only as an album, it pales in multiple departments. If you think of It’s Only Me as what it is—the modern incarnation of an artistic medium which should be, but for some reason is not, obsolete—it far exceeds the bar Lil Baby’s contemporaries have set. Lil Baby has avoided attempting to meet the arbitrary standards and traditions of what a “great album” should be, while remaining the best and most popular rapper alive. Unlike other artists who strive to carry on the legacy of the “album,” and lesser artists (Drake, et. al) who drop more middling glorified playlists (More Life, etc.), Lil Baby has perfected this newer medium which better fits the current technological times. No one else, Bad Bunny excluded, makes hour-plus DSP playlists as great as Lil Baby does.

“Album” is holdover terminology, but the original definition continues to dictate the form. Despite multiple fundamental shifts in recording, distribution, and consumption methods since the medium’s inception, we expect artists to release albums of a similar length and approach to what musicians were making several decades ago. So they release a collection of new songs with accompanying square artwork, for listeners to enjoy and/or debate the relative greatness of.

The “album” shouldn’t have made it this far.  Recorded music didn’t exist until the late 1800s. The first 33 ⅓ LP record came out in 1948. The rise of the “album,” especially throughout the late 1950s, 60s and 70s, was in part a byproduct of the physical limitations of pressing and packaging vinyl. An LP would be around forty minutes, sequenced with the intention of a listener playing the tracks in chronological order, with a pause to flip halfway through.

Because of these constraints—which, mid-20th century, were considered advancements—the “album” as an artform was born. We began to compare, to rank, to rate, to review, to list. Despite the inherent subjectivity of the term, we’ve come over time to a collective semi-agreement about what makes an album “great.” Everyone’s standards are different, but thematic consistency, hit rate, sonic variance, conciseness, purposeful sequentiality, ambitiousness—all categories in which It’s Only Me lacks—tend to be the definitive factors. Those standards only developed because musicians in the mid-20th century were working within the limitations of a physical form, from which an artistic form sprouted.

The “album” is like a book, or a play, or a feature-length film. Music doesn’t have to exist in that format—just like moving pictures don’t have to be ninety-minutes with a three-act structure. They are that way because that’s what we mutually understand them to be. Two hour-ish movies continue to be the standard despite the modern cameras, storage space capacities and internet distribution methods making it possible to experiment further with visual media. We know what makes a film “great” because we know what a “film” is, just like how we know what an “album” is. It would be rare to describe an individual as “the greatest director of all time” if they’ve never made a great feature film.

My Turn wasn’t the most-streamed album of 2020 because every song was unskippable. That album’s chronological sequencing also did not up to something greater than the sum of their individual parts. It succeeded off the virality of “Emotionally Scarred” and “Sum 2 Prove,” and the expanded deluxe edition, and the confidence of Lil Baby fans in pressing play on an hour’s worth of music that would be like the title of the twentieth track: “Solid.”

It’s Only Me, like Lil Baby’s previous full-length projects, shouldn’t necessarily be compared to other albums. It is an “album” in name, but one for the DSP era: an overlong collection of songs designed to accumulate many streams, with enough substance to be chopped up into TikTok-sized pieces. When listening on a DSP, you can skip straight to “In A Minute” or “Heyy.” Or you can press play and let it ride, and get locked into the singular sound, but excitement will dissipate if you’re expecting it to succeed on the same level as great “albums” of the past and present. Like My Turn, It’s Only Me doesn’t prove that Lil Baby has put intentional effort into making an album great. Instead he’s proved again that he is capable of putting together a collection of good songs, because he himself is so effortlessly great.

It’s Only Me does represent the pinnacle of a form which has evolved, even if most of us still think of the “album” from an outdated perspective. Lil Baby’s discography sounds the way it does not because of an artistic urge to innovate, but because of a need to adapt to the realities of modern streaming technology. DSP albums do not represent a dramatic shift in art as a response to technology, like the inception of film or even hip-hop itself, but the dynamic is similar. These types of albums represent an overt change in the distribution and consumption of music. Migos’ Culture II or Moneybagg Yo’s A Gangster’s Pain can be viewed as “the discovery” of a new art: overlong streaming service fodder with plenty of filler. It’s Only Me (or perhaps more accurately, My Turn (Deluxe Edition)), can be regarded as “the perfection” of it.

Quibbling over terminology is pointless. Who cares whether It’s Only Me is an album or a mixtape or a playlist? It’s all of them and none of them. It’s a body of work. But it’s marketed as an “album,” which is a loaded historical term that evokes specific ideals. Lil Baby’s style is not suited for that form. Our current technical reality suggests it’s time for the “album” as we know it to fade away, and give rise to a different artform. No one is excelling at this artform quite like one of the—if not the—best rapper(s) alive.

These Slides are a Fittingly Regal Tribute to MF DOOM