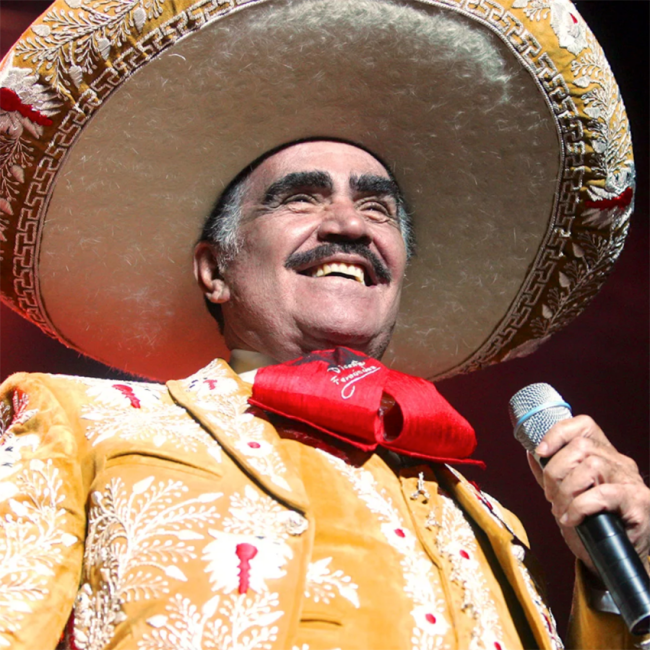 Leonel wants food and traveling journalism for the working class.

“If the audience keeps clapping, Chente will keep singing”, a triumphant Vicente Fernández used to spout at the height of any of his 4+ hour shows, in any of the tours he went on for at least half a century.

That was the kind of unstoppable and disciplined performer he was. A towering presence despite his short height, the man suited up, charro style, and appeared in basically any town and city in Mexico — and later the whole of Latin America — fans asked him to. He had hundreds of songs to back it up, from a massive archive of Mexican Traditional music (the Great Mexican Songbook, as I call it) to those made specially for him from the country’s top writers.

He was also a movie star; most of his films are Televisa rerun staples and can still find an audience to this day. His image, the archetypal Mexican “macho”, rugged, strong, brave, is an undeniable part of what Mexicans still perceive as Masculinity. He was a man of the people. He represents everything there is to know about Mexicans.

But he is also a reflection of the very worst in us all.

“El Chente” came from a humble, rural origin. Born and raised in Huentitán el Alto, Jalisco, he had to move to Tijuana with his family due to poverty and precariousness. He was a bricklayer and house painter, earning just enough to support himself. Music called, and he became a busker. A few years after this, Fernández was already a cultural phenomenon. The quintessential rags-to-ridiculous-riches story, which was sold to an entire nation for decades. He was a champion for us all; the kind of man everyone raised on a firm hand and casual neglect wanted to be. The kind of man every woman raised on shame and recalcitrant Catholicism was taught to desire.

And the songs were so powerful, they became part of our National Memory. To this day, no house party in Mexico could exist without someone cracking up one of Chente’s iconic Ranchero ballads. Especially if a Mexican is drinking to drown out the heartbreak. Anthems like “Por tu Maldito Amor”, “La Diferencia” and “Acá entre nos”, some of Ranchera music’s essential tales of betrayal and abandonment, have been sung by a myriad of performers in every genre, but nobody can compare to what Chente did with them. His earthy baritone, his vocal inflections and impassioned performance style could perfectly articulate the emotional heaviness of these lyrics, and of the entirety of the Ranchero genre. There will never be an interpreter like Chente.

But behind his stellar musical presence, there was an incredibly problematic and flawed man, and these flaws are too considerable and harmful to be ignored. You see, a huge number of his songs portray women as double-crossing, unreliable, immoral, and worthy of scorn and even physical and psychological violence. Men are often upright figures, well-meaning individuals that could do anything for love. In his stories, there was a clear victim and a clear villain.

He was also particularly harmful in several moments in his personal life. There were several allegations of domestic violence throughout his 58-year marriage to María Abarca, and as recently as early 2021, there were reports of sexual harassment and other misconduct towards fans.

But what he’s most infamous for is for his homophobia. Throughout his career, he has made countless comments on what “real men” should be, echoing his aversion to his effeminate male colleagues and fans. Most notably, in 2019, in an interview where he talked about his health, he said that he was at the hospital in the US for a liver transplant, and he rejected it because his donor was probably “a gay, or a drug-addict,” as if homosexuality was some kind of congenital disease.

Chente is definitely a part of Mexican culture, not only for his musical legacy, but for what a figure like him says of us. Millions of devoted fans are mourning his death and singing his songs. Mexicans in the US have come together to celebrate him, and to remember where they’re from. His songs are an integral element in our communities, just as his concerts were almost like religious gatherings.

And yet, he also represents many troubling aspects of who we are. He contains the multiple contradictions of Mexican masculinity; the passionate lover who is able to shed a tear when a partner leaves, the hard-knocker who earned it all by the sweat of his forehead and the pain in his back, but also the husband that could hit his wife dare she expressed herself, the father who could banish his son if he wants to love another man. He is a constant reminder that Mexican society, despite very recent, marginal advances, is still deeply conservative, reactionary, and violent. He encapsulates the image of the past we desperately need to leave behind.

If you want to listen to Vicente’s music, here’s a playlist with his top tracks: