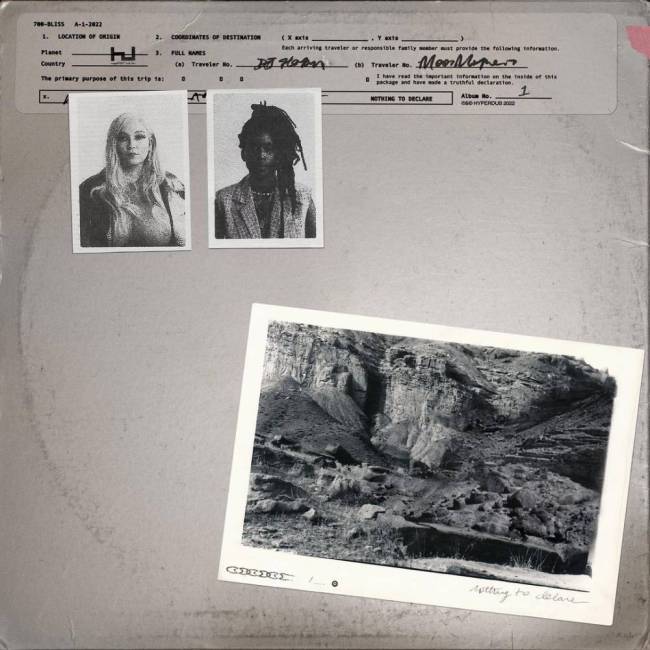 Dean Van Nguyen: big fan of both soccer and music.

The world is on fire, but what else is new? Moor Mother and DJ Haram, a.k.a. 700 Bliss, are painstaking documentarians of apocalypse, digging beneath the ruins of empires and searching for their original sins. The first track on their debut EP, Spa 700, combines jittery Jersey-club rhythms and a scratchy, ancient-sounding violin, blurring timelines, moods, and continents together. Moor Mother’s lyrics cut through the morass: “Look ma, we made it / Only lost 100,000 coming over on them slave ships.” Theirs is a project concerned with shared traumas, with blood-stained soil and generational rifts. Nothing to Declare, the duo’s latest release, is most impressive for the ways it reckons with histories, weaving them together like latticework and interrogating their intersections.

700 Bliss was borne from a shared interest in improvisational music, and each of the group’s members have deep roots in experimental music scenes: DJ Haram got her start in noise circles and initially approached the turntables as a way to learn sound design, while Moor Mother’s oeuvre stretches from broken-down jazz to full-throttle noise-rap. Nothing to Declare harnesses the livewire energy of an electric improvisation session and the anything-goes attitude of each musician’s work; it captures the chemistry of a group with years of camaraderie, with each member moving in lockstep down countless blind alleys. Each left turn renders the record a bit more disorienting; each corroded rhythm from DJ Haram makes Moor Mother’s sharpest observations cut a bit deeper.

This carefully-laid discomfort is typified best in “Capitol,” one of the record’s most striking pieces. In just three minutes, the piece moves from paranoid spoken-word to horror-flick nursery rhymes, fried-vocal screams, and back again. Moor Mother tangles non sequiturs with gritted teeth, connecting Willie Lynch and contemporary class wars, Luniz and Leviticus; in her lyrics, there is no clear distinction between 2022, 1712, and the Old Testament. DJ Haram’s production is similarly unsettled: a pile of broken-down keyboards and sputtering kick drums gives way to a heartbeat and a dial-up synthesizer, only for it to all get swallowed up by an abyssal bass. “How much blood did we lose this year?,” Moor Mother asks, and nobody can answer.

At times, Nothing to Declare can feel like a scrambled taxonomy of pains, collapsing the space between slave ships and contemporary “post-racial” white comfort to reveal just how little has changed. “Woke up yesterday / burning empires,” Moor Mother says on the sardonically titled “More Victories,” her exhaustion underlined by a million-ton kick drum. “Yeah, we need more love / Yeah, we need more victories,” she continues, outlining something that feels simultaneously essential and just beyond reach. The record’s production strikes a similar chord, speeding between lucidity and delirium. Most of DJ Haram’s beats are thoroughly disorienting—she favors busted-amplifier sounds here, full of serrated noise and a bleary low-end—but on occasion she takes a sledgehammer to the hall of mirrors, turning any noisy abstraction to a pile of rubble through blunt force. Moor Mother’s words are frequently obscured, talked over, or simply garbled, but her writing, always cutthroat in both tone and content, consistently slices through the scorched-earth sonics.

It’s not all quite so bleak, though. Even in greyscale, 700 Bliss find shards of brightness, and that contrast makes for some of the record’s most arresting moments. This is often through dance, motion, rhythm: “Anthology,” the most club-ready track on the LP, is dedicated to Katherine Dunham, the “matriarch of Black dance” who explicitly tangled American dance tradition with the rhythms of the African diaspora. Even “Sixteen,” which puts a pitch-black anecdote about shattered societies atop a kick drum drenched in static, finds solace in motion, framing dancing as the only way out from a world ridden with overlapping crises of apathy, climate, and violence. It’s fitting, then, that the record’s rhythms are often highlights in their own right, whether it’s the propulsive hard-drum-breakbeats of the Muqata’a-assisted “Candace Parker” or the drugged-out almost-trap of “No More Kings.”

700 Bliss have been incisive since their inception, but on Nothing to Declare, Moor Mother and DJ Haram push each other into ever sharper territories: gutting lyricism and goblet drums, too-contemporary transgressions scattered atop hair-raising noise. They grapple with all sorts of hefty ideas throughout the LP, stretching anecdotes until they snap in two and tangling club-music ideas into gristly forms, but they rarely seem beleaguered by their ambitions. On “Capitol,” Moor Mother offers a compact thesis statement: “I wanna sip what dreams are made of / I wanna slice the throat of those who enslaved us.”

This balancing act stretches across the entire record. Its piles of dreams and despairs argue that nothing is truly sui generis, but also that nobody is forever shackled to their pasts. Nothing to Declare underscores the intertwinement of resilience and trauma, but it is neither a glamorization nor a glossing over, not a retelling or a retrofitting. It is a monument assembled out of deeply felt stories, shrapnel-punctured rhythms, and charred histories, gesturing towards a million futures at once.

Drake Now Has The Most Billboard Awards Ever

The Ballad of Archibald Slim