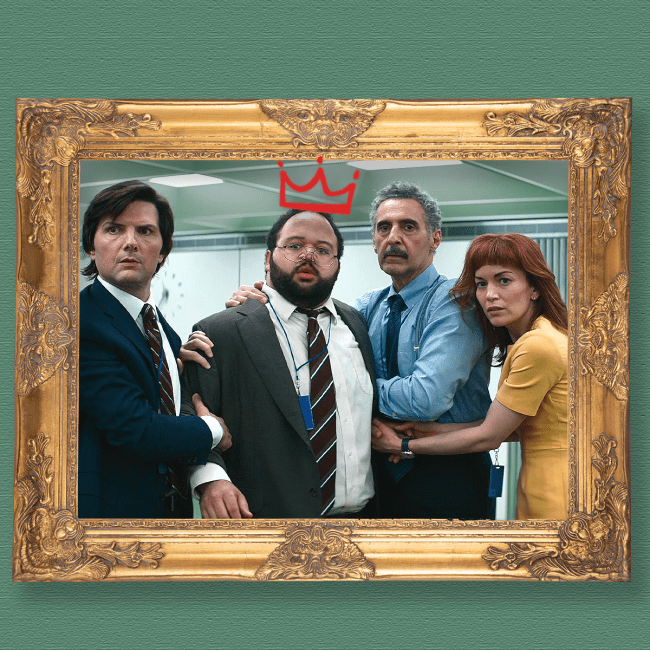 Our writers work to break the algorithm to give you some real music recommendations with the occasional prestige TV co-sign. Show them some love by supporting Passion of the Weiss via a subscription to our Patreon.

Abe Beame knows the secret to online engagement and follower growth: declaring which Pac album is best while ignoring any other takes that contradict ‘Me Against The World’ as the correct selection.

On the popular Ringer movie podcast The Rewatchables, they have a fun/dumb distinction handed out every episode called “The Dion Waiters Award”. It’s named after the mercurial, irrationally confident, free firing journeyman two guard, and is given to the actor who makes a symphony out of a song, a meal out of a bite, a master scene thief who appears on screen for a short time, but leaves a lasting impression. The question for my current favorite working character actor, Zach Cherry, is not “if” he will ever win a Dion Waiters award, but “when”.

Cherry is stocky. His very circular physical proportions bring to mind the pissed off cartoon snowman that came to prominence on Young Jeezy merch. His back is hunched, you’d imagine specifically and exclusively because of the hours spent curled over a laptop in a coffee shop, assuming his natural state of the snarky reply guy with an uncommon hit rate in your mentions. His dominant feature is his receding hair and beard- often the same length and consistency- giving the impression his face grew into his hair, rather than vice versa, and brings to mind a Japanese cream puff logo. He looks like a distant nephew of the great Stephen Mckinley Henderson, only adding to the instant joy and recognition he elicits when he shows up as another razor tongued bookstore cashier or office coworker armed with a perfect one liner. It’s the fluffy candy coating hiding his acidic, snarky center.

His demeanor is affably terse, smirking but never smiling. He’s a born smartass who speaks in well polished paragraphs. He was and probably still occasionally is an improv comedian, and you can tell from his bone dry, sarcastic, easy and barbed line deliveries. He either inspires, or creates the best punched up comebacks and observations in any television show or movie he pops up in.

Cherry was nowhere in my life, then suddenly he was everywhere. He first came to my attention on HBO’s late, great New Yorker short story collection High Maintenance when it was still a micro web series. He stumbles into a scene, forever looking like he could be 20 or 40, adding to the show’s trademark pitched state of Brooklyn randomness, in diabetic shock. It was probably the last time he’d ever be silent on screen. Since then he’s built an impressive iMDB as a “that guy” on cool kid comedian TV projects like Broad City, Search Party, The Unbreakable Kimmy Schmidt, and the weird but underrated Crashing as Pete Holmes’ “manager”. If you had to point to a breakout role, it was the time he became the first, and in all likelihood the last person to ever blow Kiernan Culkin off the screen in Succession.

Each generation gets the everyman character actor it deserves, and Cherry is ours. He has the detached, aloof quality of the millennial who was raised on a steady diet of social media and filters everything through that prism, critiquing recaps of episodes of shows he hasn’t watched yet, communicating in group chats solely through memes. So far, my favorite utilization of his gifts has been, somewhat stunningly, in the Marvel Cinematic Universe. Now that Stan Lee is gone, he’s become a Hitchcokian Easter Egg, he started as a street cart vendor in Queens- credited as “Street Cart Vendor”- in Spider-Man: Homecoming, an 11 second role he’s gotten stunning mileage out of, but he returns on the other side of the country in Shang Chi and the Legend of the Ten Rings with an actual name as Klev, the vlogger, and as usual, Feige and co. display a perfect understanding of their subject’s gifts.

He’s doesn’t run or even appear distraught as a wild set piece unfurls in front of him on a MUNI bus. His reflex, befitting a guy who looks like he has a double digit daily screen time average, is to grab his phone and begin narrating the action for his followers. And why wouldn’t he? A superhero throwdown is tame compared to some of the shit you can find on Tiktok these days. It makes sense that the world’s most dominant franchise has subscribed to his talents, they’re just like us, they can’t get enough Zach Cherry.

Cherry recently had, probably fifth or sixth billing on the best TV show few people seem to watch or care about, Severance, on Apple TV. He brought his standard bite and wit to the mainplayer role as a guy in the Ben-Stiller directed subterranean Kafkaesque hellscape who just wants to punch the clock and keep his head down, until he doesn’t. It suggests his star is on the rise, leading to a future of meatier roles and expanded screen time. I have mixed feelings. Perhaps Cherry is ready to run a team, but why on Earth would you want to fuck with a master specialist?

VanJess Perfected Their Own R&B Sound on the ‘Homegrown’ EP

Timbaland Takes Loss On Mansion Sale After Dealing With Squatter

Run The Jewels Explain Signing With BMG After Independent Success

#DXCLUSIVE: Dax Delivers For The Family With "I Did It First" Video