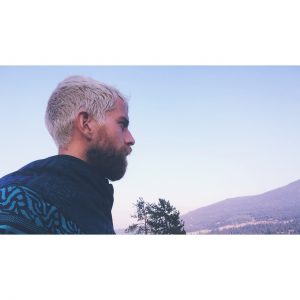 Two more top-picks for you this week and they are nicely contrasting while still occupying the same rarefied space of electronics and atmosphere.

Apollo is Joel Jasper, a Vancouver-based multi-instrumentalist and producer who is no newcomer to the music scene – his love of all things musical beginning when he first picked up a guitar at the age of 13, later blossoming into a full-fledged career upon discovering electronic music during his time at university. Apollo was created to conjure images of celestial beauty and bliss and Skydive explores this through his fascination with synesthesia – the connection between sound and colours.

There are some absolutely gorgeous deep and warm moments on Skydive interspersed with more run-of-the mill disco/funk-tinged soul tracks, but it is these stand-out tracks that ensure you will keep going back to the album for repeated listens. Think Com Truise meets Tycho filtered through Washed Out and you are getting close to the glitched-out funk of Apollo‘s sound.

On the featured track “Arrival”, bass and beats sound like they are on slow-evolve, warping through woozy synths and ethereal voices; bent fusions of synthfunk, synthpop, and Italo disco glide through clouds of gleaming synthesizer melodies to descend in melodic showers.

Elements of synthwave, deep house, vaporwave, electro-soul and neo-funk abound and the vibes are deep and mellow.

The album doesn’t hit home with every track but there are some outstanding moments that reward the close-listener; “Arrival” (featured here), “Singular Heart”, “Sky Dive”, “Forever” and “Reachin Up” are standouts. Enjoy this record in one-track doses or go for complete immersion.

Apollo on the web: 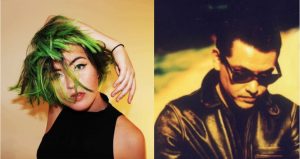 SPC ECO‘s latest album sees them explore the more downtempo waters of their fuzzed-out electronic rock. Calm is a collection of ostensibly slow-burn fuzzed-out gossamer swirlers. Each track is a billowing cloud of positively charged nebulae lit by flickering internal thunderstorms that crackle and flash with psychedelic embers.

Dark, chilly electro-pop songs are the signature of SPC ECO and on album opener “Out Of Sight” they deliver; psychedelic washes and slightly trippy beats swirl around a central bass line as gorgeous, gauzy dream pop prevails. But often it is the gaps between the notes and the breath between the words that has the biggest impact. Rose Berlin sounding dark and sultry as her voice melds with the reverbing background to stab pinpricks of light into the echoing void. Gaseous nebulae never sounded so appealing.

Guitars as subtle textures allow the dense and layered tracks to rise slowly into a blackening sky recalling the slow, moody and dark downtempo of Massive Attack.

“Calm is nostalgic in the way it feels like there are vibes from all our previous albums,” says vocalist Rose Berlin. “We didn’t limit the songs to one genre instead we had fun and did what ever we wanted. It’s loud and trip hop, psychedelic lullabies and it’s us. It’s calm.”

Definite highlights are opener Out Of Sight and closer Hours with its spectral swirl and slow-evolve grind. Calm is out now and should definitely be among your current rotators.

SPC ECO on the web:

Season Two of ‘Wu-Tang: An American Saga’ Finally Has a Premiere Date