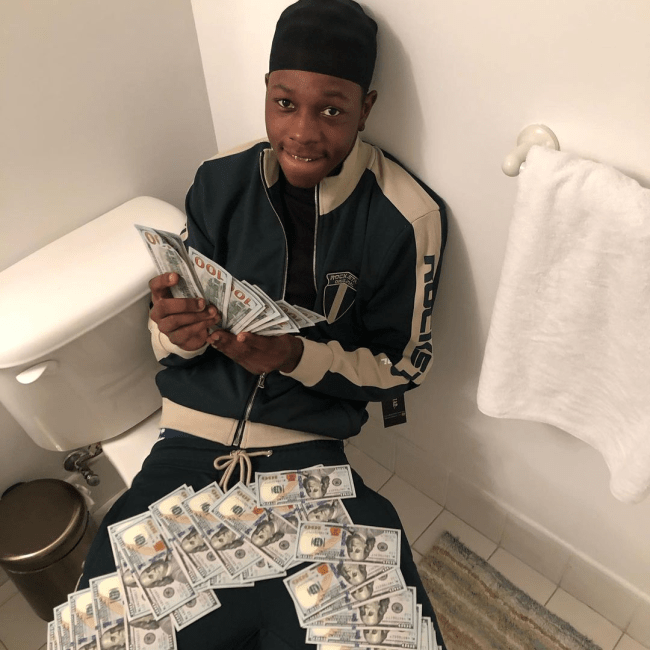 These days Harley Geffner will tell you that T9ine is the best rapper alive.

DC’s QuisActive is dangerous. You don’t have to listen to a single word he says to feel it. “Bands On Em” begins with guitar licks that make you feel like a classic Western shootout is about to happen, then the spooky slow-rolling piano kicks in to raise the stakes even higher. From there, it’s Quis’ voice that carries the weight. He echoes himself subtly, like over a war-time walkie talkie, while handing out threats to his opponents. The video amplifies the effect too with Quis in his fitted black Nike hood filmed in midnight blue hues. He comes off as an experienced soldier who pulls off his missions with a cold efficiency. He’s switching whips and glicks to evade “the task force,” changing tags on his Ford Explorer, and though he knows it’s best to keep a partner around he’s still a one man army when he rolls alone.

Good luck following Quis – he has multiple deleted Instagram pages that appear in descriptions of videos, and a few that still exist. One only has two posts from August 2021, including a picture of him in the same Nike fitted hood with a caption “#gotdeleted feds on me hit ah left,” another that only has two posts promoting this song, and a third that’s private. It’s hard to track him, just like he needs it to be.

T9ine  – “Pull Thru” and “Soldier Mentality”

T9ine is soothing to listen to. His music feels familiar and lived in, but new and fresh at the same time, like getting a brand new pair of shoes that’s somehow already worn in to the exact shape of your feet. His words roll off the tongue, and his flow is melodic and sharp. It feels like a conversation with a good friend while sitting on the front porch and reminiscing over a blunt. On pull thru, it’s an early lyric that stands out as emblematic of that type of recognizable talk, as he assures “All my life, my dude been tryin’ / shit get hard, I know you tired,” before a prayer that his brother pulls through to happier days. He’s contemplative and sentimental, without getting too deep into the bleeding heart side of melodic rap. It walks a very thin line, combining the smooth attitude of someone like CEO Trayle with some of the best that Southern melodic rap has to offer. And he doesn’t miss with these loosies.

A match made in heaven, Gucci and Finesse2Tymes are big attention grabbers – the types of dudes who you’d feel the energy change if they walk in the room, and not just because of their heavily adorned chests changing the lighting patterns in the room. It’s that commanding presence that makes them so charismatic on wax. Finesse starts off the song, stomping all over the deadly beat with his swaggering Memphis tales, shouting out the since-demolished housing projects he was raised in and explaining the ways people from there got ahead in life (“killing, pimping, robbing, stealing, whatever to get it”). Now look at him – he went from a 5 year prison sentence to doing songs with Gucci, who meanwhile rips his own verse on the song, raisin’ terror in his 9/11 porsche and taking peoples’ weapons without a weapon.

Dee Watkins  – “Until That Day Comes”

Dee Watkins’ melodies have a way of slithering into your subconscious. On “Until That Day Comes,” he hops right into his melodic hook to start the song with some fiery imagery, singing “pistol on my right, bible on my left,” with his nasally Floridian drawl. By the end of the song, you’ll be humming the melody over the outro keys.

My recent obsession has been Florida DJ mixes – some of the songs get sped up, some get slowed down or chopped to hell, and it all sounds beautiful together. LazyGod has always been one of the most creative mixers, and was instrumental in the acid-washed ambient rap wave that took over Soundcloud for a brief moment in 2019-20. He has great taste in Florida music – It’s old Kodak nightcore mixed with a slowed, growling GoldenBoy CountUp and some stuff that I can’t ID that’s had me running back to specific time stamps the last few weeks.

After Years of Anticipation, the Posthumous Phife Dawg Album ‘Forever’ Has Been Released

Slam on the CDJ: The Best DJ Sets of February 2021

One Day the Music Goes Away

Juice Wrld’s Cause Of Death Revealed