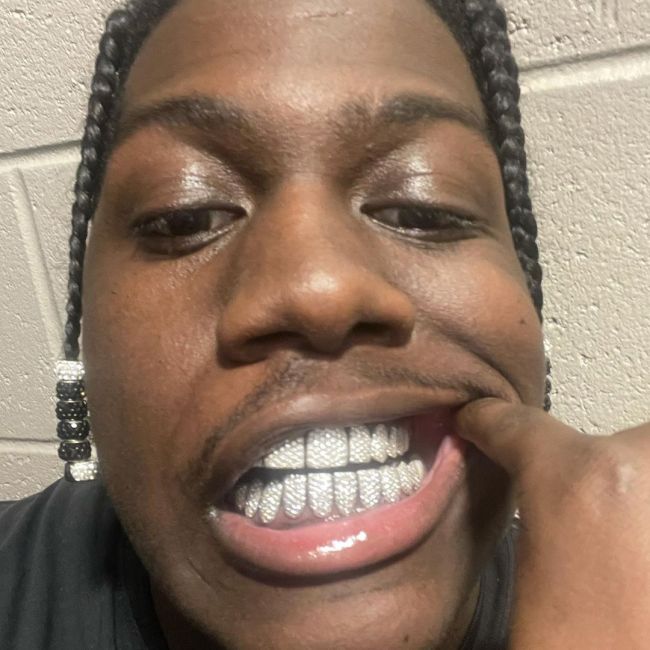 Young Threat’s voice sounds like it’s being siphoned through the staticky drone of an intercom: monotonous and expressionless to the point of near disembodiment, as if it were being beamed in from a hole in the ceiling somewhere. He’s one of four rappers I interviewed for a story that never came out last year about the Hoover Criminals, a South Central gang making noise on Youtube with its fatalist brand of gangbanging anthems and day-in-the-life neighborhood tales. Of the four, two are currently locked up, with Tr3yway6k beginning a six year prison sentence for charges related to shooting someone in the ass on camera, and Jap5 currently awaiting trial for an attempted murder charge out of Lancaster, California. This leaves SwiftChapo and Young Threat to hold down the fort, at least for the time being.

“Supreme,” is the first single off Young Threat’s recent release, Still In The Trenches, an 8-song record that sees the artist trying on different masks while honing his skill as a reliable vessel for the type of pain and alienation that comes from seeing half his circle get locked up. Hardly a song goes by without Young Threat shouting out his incarcerated loved ones and “Supreme” is no different. “I pray my brothers get released,” Young Threat says, before exegeting on LA county jail ethics like knowing what time of night it’s safe to fight without guards interrupting. The album title draws attention to an interesting aspect of being a street rapper, where an artist like Young Threat can have millions of views on Youtube, yet still not have the financial mobility to move out of his neighborhood and better his situation. In the video, Young Threat and the Hoovers are partying atop a hotel in Anaheim, home to the Disneyland Resort, with Angel Stadium visible in the background. Although Young Threat may still live in the trenches of South Central, it’s clear he’s slowly building a path out and the skylines are only getting prettier.

There’s an undeniable chemistry between Kenzo B and Young Devyn, two New York drill rappers who previously collaborated earlier this year on “Rap Sheet.” Kenzo B is from the Bronx and Young Devyn is from the East New York section of Brooklyn, but both artists take similar approaches to drill beats, fitting in as many quotables and outlandish threats to perceived enemies as time will allow. On “The Facts,” Kenzo B says “Bop how I bop and a bitch never stopped me, fake shit but she keep moving cocky, maybe she gay and this bitch wanna top me, and she know that was never my body,” before Young Devyn chimes in, “I cannot beef with no kid I don’t like rats, seen you unfollow me, that was your get back.” The production features an electric guitar riff looped into a drill beat and reminds me of “Bump It,”, which flips “Misirlou,” an old Dick Dale surf song that you might recall being used by Quentin Tarantino as the theme music to Pulp Fiction. While “The Facts” is not immediately as catchy as “Bump It,” it does serve as further proof of the potential for a full-length collaboration between the two queens of NY Drill.

This is my favorite type of Louie Ray song: no chorus and every break in the beat is filled with further shit talking. Louie Ray, along with Flint-native and close collaborator YN Jay, have a seemingly endless amount of new music dropping on their Youtube page. Both artists have never been scared to step out of their comfort zones, experimenting with different song structures and more melodic verses that border on straight singing. But for me, Louie Ray is at his best when channeling the energy of his blood brother, Rio Da Yung OG, delivering a mix of wise platitudes, crude sexual humor and anecdotes for being high on opiates. On “Can’t Play Wit Me,” he recycles through multiple flows with ease, professing his love for fast money and proclaiming that he’s recorded over 10,000 songs with no misses. I don’t think he’s exaggerating.

It wouldn’t be too hard to sneak some Wockhardt-branded codeine cough syrup onto an international flight to Poland. As per TSA regulations, a traveler is allowed to pack over-the-counter liquid medicines as long as it’s in a container no bigger than 3.4 ounces. Although the Wockhardt Lil Yachty raps about in “Poland,” isn’t OTC, the traveler could, in theory, buy a travel-sized cough syrup, empty its contents and pour in the aforementioned forbidden elixir. The security will be none the wiser and it would save the traveler from having to cop opiates in Central Europe, where a drug called “Krokodil,” named after the scaley sores that develop around the injection site, is widely manufactured and abused in lieu of access to “better” drugs. Although more realistically, Yachty probably avoided a stringent security check by just flying private.

“Poland” marks the first time Lil Yachty has collaborated with rage-producer F1lthy in nearly five years, excluding a beat used in last year’s Birthday Mix 6. It’s also the second time Lil Yachty has created a viral moment with a song named after a cold place, following the release of his breakout hit “Minnesota” in 2016. Lil Yachty is surprisingly able to wear many different hats. He’s mainstream enough to have starred in Sprite commercials with Lebron James and to have his own pizza brand in Walmart. Yet musically, he’s always drifted towards rappers he admired himself versus whatever was working on the radio. Yachty is also very good at trying new sounds all while riding a fine line between self parody and genuine brilliance. With “Poland,” Lil Yachty offers his whimsical take on an instantly classic rage beat, turning the simple chorus, “I took the Wock to Poland,” into the most meme-able phrase of the week. It’s inspired some decent remixes as well. Here’s a New Jersey club remix from OmgAddy that you need to hear.

This is my personal favorite RX Papi release from the past two weeks. While the Rochester, New York-raised rapper is currently locked up, his team has been dropping a fusillade of new music, keeping fans satiated while the real RX finishes out his sentence. The handful of songs released are generally high in energy, with RX Papi going full berserker mode by the end of each track. Not on “Facetime,” which sees him slow things down, speaking directly to a special lady unnamed. He says “my bitch knows I’m the real John Wick,” and then makes a somewhat unreasonable request: “five hour drive, why don’t you hold it down real quick? Baby girl, you know my license is dirty as a bitch.” This is true love.

“This is Creativity”: A Conversation with DJ Muggs

This Youtube Channel Has Been Uploading J Dilla Rarities for Months