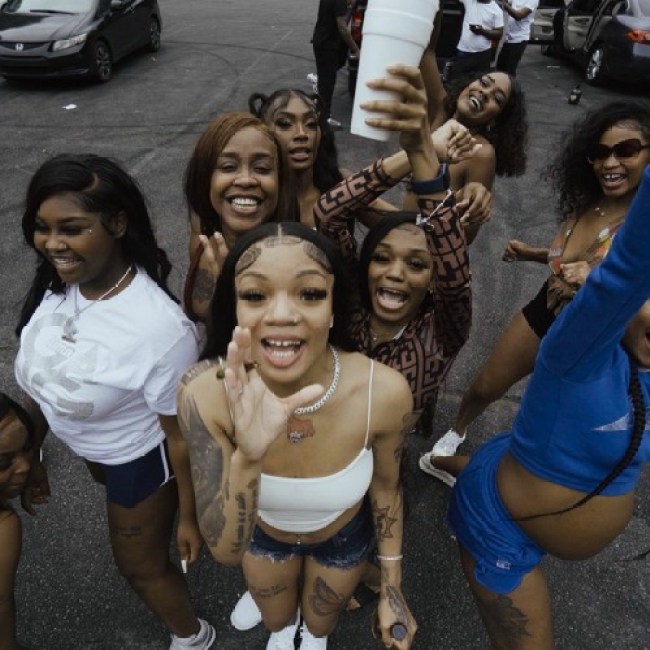 Harley Geffner knows that there’s no war but the class war.

Babyface Ray is a master of success rap. His lifestyle bars are so real, you almost feel like you’re joining in on the applause as he tells his kids the world is theirs and they can buy anything they want. They feel real because he never makes it seem like it’s all gravy at the top. He can afford all the pills he wants now, but they keep him up all night. It’s not punishment enough that his ex is with a lame at the club, he wants to make sure they notice him balling, which feels like a very human emotion. He still sees his demons in the clouds from his 500K townhouse too.

This song is so refreshing. Memphis’ Glorilla has a genuine hit on her hands here – “FBF (Let’s Go)” currently sits at just shy of 7 million YouTube views in under a month, and Nicki is already twerking to it in clubs. It has the same crunk ass energy of those early Blocboy JB songs, and Glorilla’s care-free be yourself type attitude is so magnetic that it makes you want to throw anything you’re holding in the air and yell “fuck it!”

Glorilla’s sick and tired of all the fuck boys, and is free from them now. Free to do what she wants – aka hanging out car windows with her ratchet friends and twerking on the front hood at red lights, smoking fat blunts, and ripping Hennessy.

Apparently, there was also vigorous debate about the song online which helped it blow – but all I saw were a bunch of tweets telling everyone to leave Glorilla alone, and none actually chastising her for the song. This shit is for everyone – single or not. The Let’s Goooo hollering is bound to be a religious experience when in a crowd, and there will surely be plenty of test cases this summer, because this one isn’t going away anytime soon.

You feel it from the intro. The hymnal choir sings like they’re participating in a sacred Christian killing ritual from thousands of years ago as NR Boor winds up with some subdued lines about catching an opp. Your heart is beating fast by the time the full register of his voice drops in – and when it goes back to the subduction for the second hook, it feels so dream-like it’s almost as if you’re the body he just caught, listening from beyond. It’s spooky as hell, and OT7 Quanny adds to the aura with his own play on the filtered out hook to close out the song.

Ralfy The Plug – “Make Me Happy”

Ralfy has always been a good rapper, but his ear for beat selection and thematic choices have been getting more and more refined over the last year plus. He turns one bar into a whole song like nobody else. The first song here with DB Boutabag is all about how he’s so cool he’s making those around him uncomfortable. He’s getting more money than your dad, he’s in a foreign and you’re in a bucket, and you are definitely not feeling comfortable on that damn blow up mattress.

DB chimes in with a solid verse along the same lines – you’re smoking mids then you’re not trustable, etc. The next song is all about how a woman has to bring him literal bags of money to make him happy. It’s a sly absurdism – not as on the nose as someone like Rio’s over the top shit talking, but it’s similarly clever and just a bit more simplified in a way that’s pretty unique to Ralfy. And putting mini-golf off the racks was a nice touch there too.

When 42 Dugg gets into his bleeding heart bag, there aren’t many who can match his voice. His slight vocal fry in this breakup song makes it sound like he was just able to stop crying enough to hop in the booth and lay his feelings down on the track. He, and his hook-mate Arabian wail together that soooon they’ll be back to themselves, and no longer need anyone else – and you just feel it in your chest.