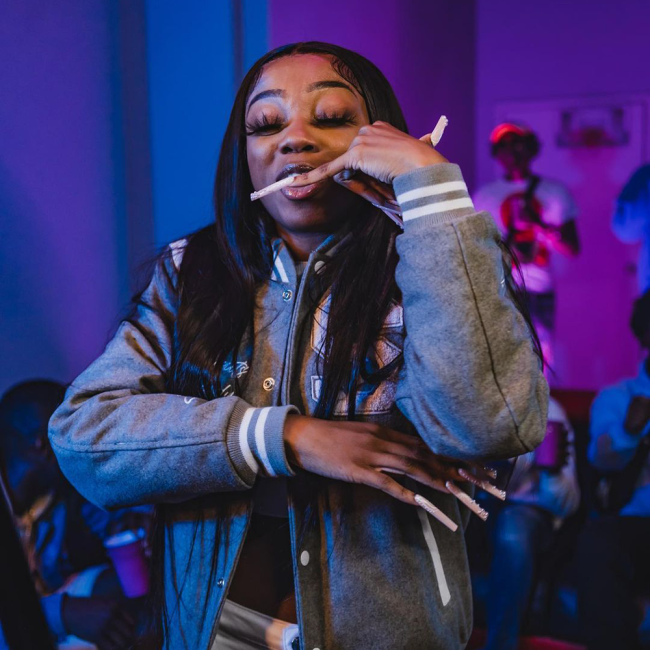 Donald Morrison’s love language is this photo of Big Boi and Criss Angel.

Over a drill beat that reimagines Offset and Cardi B’s 2019 single “Clout,” two of New York’s most promising artists come together for the first time, matching gritty verses with gleeful charisma. Young Devyn is from the East New York section of Brooklyn. A few years back she became the youngest artist to be featured in a BET Cypher at age 17, going last and easily out-rapping everybody else in the circle, opening her verse with “I’m touching more green than Jamaicans, I’m Trini’ but know couple Haitians, still reppin Brooklyn, I’m nothing to play with.”

Young Devyn scored her first certified hit last year with “Straight To It,” earning comparisons to the late, great Pop Smoke with an aggressive and no frills approach to New York drill. “Rap Sheet” is produced by datboydionis, who has crafted beats for artists like NLE Choppa and has a Youtube page full of the type of sample-heavy drill beats popularized by Sleepy Hollow and Sheff G years back.

This is her first collaboration with the Bronx’s Kenzo B, who released one of the best songs this year so far with “Bump It,” which brilliantly flips “Misirlou,” an old Dick Dale surf song that you might recall being used by Quentin Tarantino as the theme music to Pulp Fiction and later sampled by the Black Eyed Peas on “Pump It.”

Young Devyn starts the song by mocking an enemy who’s too scared to @ her on Twitter – easily relatable to anybody who’s been subtweeted for simply stating an opinion. Later, Kenzo B admits she has good manners for never forgetting to @ her own enemies when telling them to eat a dick. They know the ethics of good posting and it would be a shame to end up a trending topic on either of their timelines.

Big Sad 1900 has leveraged a series of single-producer EP’s and a consistent stream of street singles to quietly become one of the most consistent artists in Los Angeles. In the past two years, the Playboy Gangster Crip has released projects with beatmakers Cypress Moreno, Uce Lee, Steelz and 420 Tiesto, and had his “Lemon Pepper Freestyle” played on OVO Radio.

His measured flow that reminds me of Nipsey Hussle, and like Nip, Big Sad has the penchant for displaying the type of wisdom usually reserved for someone serving a long sentence – like the old head in prison who walks around with an all knowing peace despite the chaos of daily life. It’s this rare perspective that makes Big Sad’s music stand out. He’s able to speak about the harshness of gang life in a way that his contemporaries just aren’t. See “Problems,” the opening track on his Percs & Syrup EP, where Big Sad maturely takes responsibility for his own defensive nature. “Problems in my life and I ain’t knowing how to vent, I feel defensive when I speak and have my back against the fence, and I got court in January, hoping they don’t make me sit.”

“Gang Members” shows Big Sad and his extended crew hanging out in front of a partly demolished set of project flats. He begins the song by grimly rapping “it was the look on her face when my cousin died, but I’m paranoid, if he didn’t die he might testify.” He’s really good at succinctly touching on these bleak contradictions without beating us over the head with them. His youthful nature almost makes his perspective feel unearned until you realize Big Sad had already two stretches in juvenile prison by the age of 18.

I first discovered Ssjishmael while combing through a sea of replies to a Playboi Carti tweet in the chaotic months leading up to the release of Whole Lotta Red. The Ohio-based, Dragonball Z-inspired rapper had somehow gamed the algorithm into a series of viral tweets featuring a snippet of his song “Finer Things,” which samples “Almost In Your Arms,” a love song from the 1958 film Houseboat, starring Sophia Loren, Cary Grant and originally sung by soul legend Sam Cooke. “Filet Mignon” is the latest single from the SoundCloud Super Saiyan, who dares to ask how anybody could want beef with him if they don’t even like Filet Mignon? I wonder if this song is referring to anybody specifically? If you’re not vegan or vegetarian, it would be pretty embarrassing to not like filet mignon, one of the best cuts of meat around. Perhaps he heard a family member turning down a beef tenderloin at a festive dinner, or maybe he just really likes filet mignon.

You know what you don’t see anymore? Weed anthems. Like the kind we used to get every year or so. I’m talking about timeless songs: “Blueberry Yum Yum”, “Doobie Ashtray”, “I Got 5 on It”, “Hits From the Bong”, “High All The Time”, “How High,” and the list goes on. Oakland’s own Ezale is back this month with “Ironic,” a weed anthem that feels like it could be 10 or 20 years old. The track is centered around a line expertly sampled from Neo-soul singer Angie Stone’s classic, “Wish I Didn’t Miss You.” Ezale is nimble with his verses and has rightfully drawn comparisons to Mac Dre and DJ Quik since at least 2015. There are parts of “Ironic,” that also remind me of Suga Free and even Sada Baby to a certain degree. The beat is bouncy and funk-inspired, suitable for a dance floor or a poolside kick-back.

We don’t get as many classic weed songs because smoking weed isn’t as cool as it used to be. It’s hard to make smoking weed a revolutionary act when dispensaries look like Sephora and it’s $90 for an eighth, plus tax. I shudder to think of all the high school kids whose first taste of Mary Jane comes from a wax pen in a bathroom stall and not a joint under the bleachers. But regardless of the cool factor, more people in this country are consuming marijuana or CBD than at any time before.

Ezale’s revamp of the weed anthem is needed now more than ever to remind people that smoking weed can still be cool. “Ironic” succeeds by never straying far from its subject matter; Smoking weed is the point, not just a means to an end or the drug of choice for someone coping with hell on earth. It’s a celebration of the miracle drug that Californians have begun to take for granted and has a throwback feel that begs to transport you back to your first hit.

Wynne is back this week with a Dilla-inspired single that remains true to her underground roots. Her debut album from 2019, If I May.., showed Wynne as a versatile MC who could hold her own against Dreamville’s JID, who featured on the lead single, “Ego Check,” as well as against a slew of veteran Portland rappers on a cypher-inspired posse cut, “The Thesis,” featuring Vursatyl, Illmac, KayelaJ & The Blazers’ Damian Lilliard, who raps under the name Dame D.O.L.L.A. Wynne has always made sure to highlight her love and knowledge of hip hop culture in a way that doesn’t feel self-serving and is an honest ode to the culture that shaped her life.

Wynne first went viral back in 2018 for a series of freestyles over popular radio singles at the time, including a memorable one over “Bank Account” by 21 Savage, proving she can rap over just about anything. “Nature Heals” is produced by Portland-based Spinitch, who provides a beat that manages to be both bright and eerie with a looped sample of a woman harmonizing. It’s the perfect backdrop for Wynne to philosophize about basement cyphers and lovers scorned, providing a heady mix of hip-hop references and slick braggadocio from one of Portland’s most promising artists.

New Album: Other by Alison Moyet