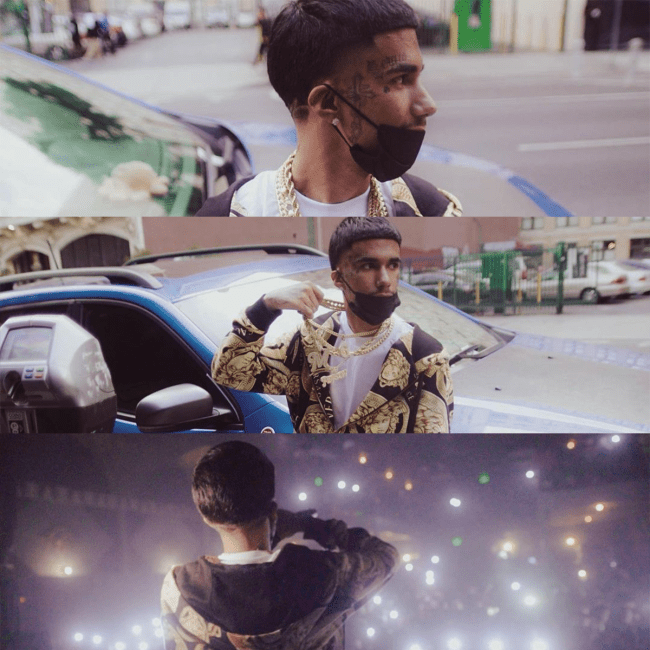 Donald Morrison doesn’t believe in imposter syndrome. Instead, what you’re feeling is a healthy skepticism in your abilities and accomplishments thus far.

Peysoh has been through a lot for a 17-year-old. He watched his father get murdered when he was six and has been in and out of jail since a young man. In interviews, his boyish looks and charm come into conflict with his face tattoos and heavy gold chains. He boasts of being the first rapper to really make it out of Maywood, California, a small Los Angeles community that consistently ranks among the most densely-populated cities in the state with the highest number of undocumented immigrants in the entire county. It’s rumored that nearly one-third of Maywood’s residents live in the U.S. without documentation.

Peysoh first crossed my radar as a close collaborator with Moneysign $uede, a Huntington Park rapper often compared with Kodak Black. There’s a heart-warming vlog of $uede taking Peysoh to Six Flags for his first time last August. Peysoh never went to Six Flags as a kid and seems to reject the manufactured dread of amusement park rides, telling the camera at one point, “I don’t think I’m a rollercoaster person.”

Although currently locked up for who knows how long, Peysoh recently dropped his first real project, Ghetto Journal, on January 26. It’s a great introduction to Peysoh’s effortless vulnerability, a young man hardened by the streets, yet unable to remove his heart from his sleeve. An album highlight is “Different Type of Hunger,” which finds Peysoh coming to terms with his struggles in light of his success, sounding sentimental without veering into corniness. The video shows Peysoh overlooking the city in a black and gold Versace zip-up hoodie with all his chains on. He’s young, he’s rich, and I hope he’s home soon to enjoy it.

The deep well of talented artists coming out of Stockton, California is seemingly endless. The latest is Javn2900, a member of the Louis Park neighborhood’s Westside Bloods. On “Different,” Javn2900 reps his hood over production that’s remarkably similar to Ralfy The Plug’s “Macho Man,” which doesn’t bother me because both songs sound great. Javn2900’s flow isn’t quite as memorable as Ralfy’s, but the Stockton upgrade to the production, with the added finger snaps and extra synths, adds a nice boost of energy to the song. I remember enjoying Javn2900’s feature on “Lay Down,” a year-old song by fellow Westside Blood BounceBackMeek, but “Different” is the first track to really show his leading man potential.

“Double C” is one of those songs that sounds the best as a soundtrack to bad behavior. For me, that looks like driving 100mph and trying to not to crash while attempting to ash a cigarette out of the window, the ash almost certainly blowing right back into the car. But it looks different for everyone. Orock is from the Jane and Finch neighborhood of northwest Toronto, Canada. In the video, Orock’s blue Corvette stands out amidst the drab, snowy landscape. It’s a menacing ode to the many ways Orock makes his cash, from his most recent tape Hood Forbes. Orock’s gruff vocals complement the sinister production, building an atmosphere pretty similar to how I’d imagine living in Jane and Finch would feel.

Two years ago I couldn’t help but tell anyone within earshot that Xanman is a young, more versatile version of Rick Ross. I would hold them emotionally hostage and make them listen to the bombastic “Foulin The Plug” or the Lil Bow Wow redux “Let You Hold Me” with Lil Dude, and stare at them until they nodded in agreement. His latest album, Rap Like The Rent Due, doesn’t quite vindicate me, but there are certainly bright spots. It seems as if Xanman ordered the tracks to alternate between street singles and slower, autotune-drenched cuts. When an album is titled Rap Like The Rent Due, you assume the artist will be rapping his ass off the entire time. Perhaps he didn’t need the rent money that bad.

“Blind” is the album opener and features Xanman’s trademark humor and wit. He starts off by bemoaning “I made this song while I got a headache, reason’ why I’m talking quite,” although he doesn’t appear to actually be talking quietly on the song, he just sounds normal. The next line he catches someone lacking at Mcdonalds and they drop their french fries. It’s the kind of detail that only Xanman could come up with and his delivery only adds to the animated quality of what he’s describing. Xanman is one of the most exciting artists coming out of Maryland when he wants to be.

The video for “Her Bad,” by 1TakeJay featuring Blueface, is centered around a Maury Povich-inspired show named, you guessed it, Her Bad. The concept of the video feels a little tired, but the song is good enough to make it work. 1TakeJay utilizes the false-start flow popularized by Flint, Michigan acts like YN Jay, Louie Ray and Rio Da Yung OG. It’s nice seeing some of their style get recognized and replicated and it sounded great. It also features one of the better Blueface verses in recent memory. He’s more subdued and is mumbling more than usual. The last minute of the video is just a collection of TikTok’s made with the song’s chorus. I get an artist wanting their songs to catch on via TikTok, but do they have to be so obvious about it?

Behind the Beat: How Jahlil Beats & Bobby Shmurda Made a Hood Anthem For All Ages With “Hot N*gga”