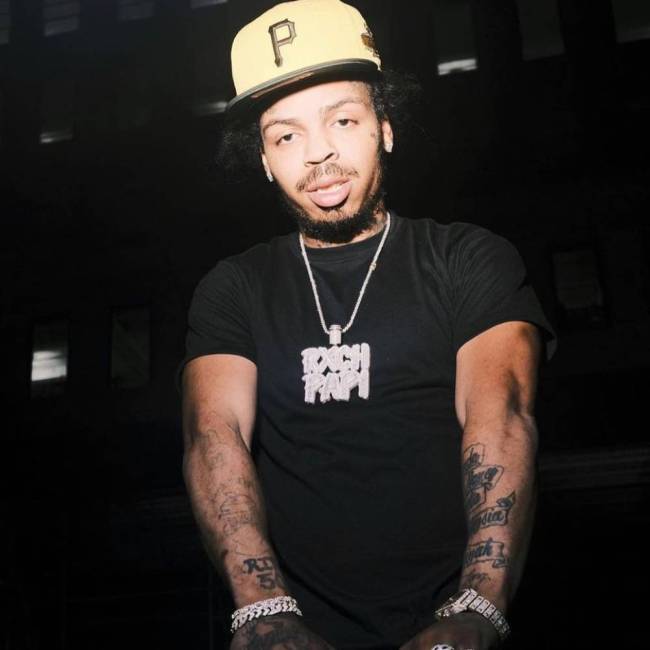 RX Papi’s haunted mind tales are as biting and incisive as they come. In this double feature song, Papi takes us through his life as a drug dealer in excruciating detail, giving the history of his family dealing drugs, details about the phone calls where his girl asks him to come home but he’s too busy still moving that last bit of work, listening to Boosie on the way to an exchange, and other scene-setting quirks. At times, it tilts over the line from living this life as a desperate last resort and into the territory of sickly addiction. The thing about Papi though is that he knows he’s sick. He acknowledges it, along with the voices in his head, the “real good steppa” mentality that he explains he uses to deal with his depression, and the morbid reality of his life. To him, you can chalk it all up to the game. He doesn’t feel bad for himself when he rails through a detailed image of himself in a casket, numb fingers with a pale face and all. He doesn’t feel bad for you if you bought bad drugs, because as he raps “I don’t know what to tell you / there’s no rules to the streets and no one who can help you.”

This is all indicative of an incredibly hardened world view. As more and more people find themselves in extreme poverty in the U.S. and experience our demented applications of criminal justice and education “reform,” the cold and harsh realities set in. As things continue to backslide for most Americans, we’re creating more hardened souls because how else are people supposed to live with the dread? Currently behind bars, Papi articulates the modern American condition better than almost any novelist, essayist, journalist, or poet alive. And the craziest part is that he just does it by speaking his mind – he doesn’t write his raps and I don’t think he puts very much serious thought into them either. He just lets it all spill out when he’s in the booth. It’s like a secret and unfiltered look inside a mind torn apart by class war and the American struggle, and it continues to be fascinating to hear it all unfold.

It’s been just two months since 21 year old phenom Lil Tjay was shot 7 times in an attempted robbery. Bullets hit his lungs, neck, and chest, and he was in critical condition, right on the brink of death. From millimeters away from a meeting with God, here he is 2 months later with a triumphant return to music in his newest single, “Beat The Odds.” It’s a shining effort, showing scenes from rehab and Tjay in a wheelchair, as well as clips of him standing in front of stained glass windows as heavenly light surrounds him. After the initial news reports and police phone calls play out in the video intro, his velvety voice cuts right into the hook, singing “Grateful for the shit I got ‘cuz I come from a hard life.”

It’s chilling to see him back and rapping this soon after such a close encounter with death, but there he is in the hospital gown, reminiscing and reflecting on his life, the encounter, and his family. He can hear his grandma’s voice telling him not to let her down.

It’s true – Jackboy is a renegade. He’s hard-headed, and per the hook on the first song here, unafraid to say what’s on his mind. Over the classic Eminem beat that he and Jay Z originally gassed on the Blueprint, Jackboy dives into his beef with his once best friend and confidant Kodak Black. The song comes just a week after a short EP from Kodak Black mostly addressing the same issues, but from radically different perspectives. Both of them are hurt, in a very serious way, by the accusations of the other. They have been like brothers since they first met in the Golden Acres projects as children (both also children of Haitian immigrant) – so much so that Kodak said on one of Jackboy’s older songs “Jackboy that’s my n**** we so alike that n**** my synonym.” But it appears the fall out over some money owed spurred this now serious rift.

The beef has been happening over wax since Kodak dropped his hit “Super Gremlin,” singing about how they could’ve been superstars together had Jackboy not switched up on him. Kodak also alludes to it throughout his latest album. Jackboy responded with a threatening diss asking Kodak not to force his hand into killing him. It’s been festering for quite some time here, but it seems to be coming to a head now with the latest back and forth this week. Kodak says Jackboy got shot at for coming around his way, and would rather die than apologize. But Jackboy is sharp in his accusations: that Kodak owes him a shit ton of money, that he’s trying to stop people from working with him (and then he lists off other people Kodak has done the same to, most of whom are signed to Sniper Gang and Kodak should be supporting), that he’s the only one getting rich off the work of everyone he’s signed or put on. Then he sharpens his knife for an more razor-like barb: “your ass a federal agent, protected by the president / I’ma real Zo, ain’t got no friends in the government / so if I fuck with you they gon’ deport me and all my kin.”

Kodak, on the other hand, is more unsure of the whole situation. He uses the EP to discuss his heartbreak and mixed feelings on it all – he calls Jackboy his brother multiple times, asks why Jackboy is suing him when Jackboy is the one who owes him money for everything he did for him, and begins to question his own sanity, and whether he’s even deserving of love. He has thought deeply about the situation, and mulls over giving into Jackboy’s perspective before realizing that that would just make them both wrong. The deepest he gets with it is on the final track of the EP, where he opens up:

“N****, come give me a hug, fuck what beefin’ ’bout
‘Cause if you let it sit too long, then the relation rot
But I’ll accept the apology that I never got”

Then he backtracks as he lays out all the ways Jackboy did him dirty, how much it hurt him to have his brother do that to him, and he concludes “put your pride to the side, send my damn money.”

The ironic part of all of this is that both continue to evolve in lockstep musically, with their flows and lyrical content maturing by the day. The beef has actually brought the best out of both of them from an aesthetic perspective – their back and forth has felt like a knife sharpening tool, like a movie where brothers who become enemies devote their lives to one-upping the other. They are two of the most talented rappers of this generation, and more importantly, they are childhood friends who should be sharing in the success their families have probably been dreaming about for generations. Let’s hope they can come to a safe resolution here.

Recent rap coming out of Philly has felt a bit like a more muted, serious version of a lot of the Detroit stuff, so this link up makes too much sense. Glockboyz Teejae sets the tone for the song with a strong opening verse – spilling lean like spaghetti, enjoying fast cars, forgetting the wild stories he tells, and repping his designer over the brooding piano-laid beat. NR Boor has a nice, if somewhat forgettable middle verse, but the visual in the Al Green tee and to hear his smooth flows melting into his ad libs carries us to the star of the video. OT7Quanny might be the most fun rapper working right now – the way he overlays his vocals and comments on his own bars feels like prime Thug going in over his first takes. It’s a hollow echo that leaves no time for the viewer to breathe. It fills every second, but in a way that doesn’t feel over-stimulated. It’s a tough balance and he walks it so smoothly, while also rapping with a specificity that draws you in like a siren song describing the forbidden acts. He loves talking to his boys in jail, but hates pressing five. The song closes with a striking visual around the 3:12 mark – the three guys, arms around each other, focused on the camera and all mouthing the words in unison to Teejae’s closing. I need a full Quanny project more than I need air.

One of the best performances from Future in recent memory. It accompanies an awesome video, with what looks like Real Boston Richey’s entire Tallahassee neighborhood. It has to be more than 70 people all turning up to the song in the video – it’s got kids on top of cars dancing, rapping, and wiping their nose to Richey’s verse and the whole group walking through the mall and posted up in their neighborhood before Future jumps in the gas the ominous beat. He applies the pressure here after Richey’s flexes, boldly claiming “if my n**** wasn’t Jigga, I’m the type to go after B / And I still smash on C / I got two fits on me / like the quarterback of the Chiefs.” This is Future at his best, when he’s focused and aiming for the target rather than aimlessly meandering around with his verses.