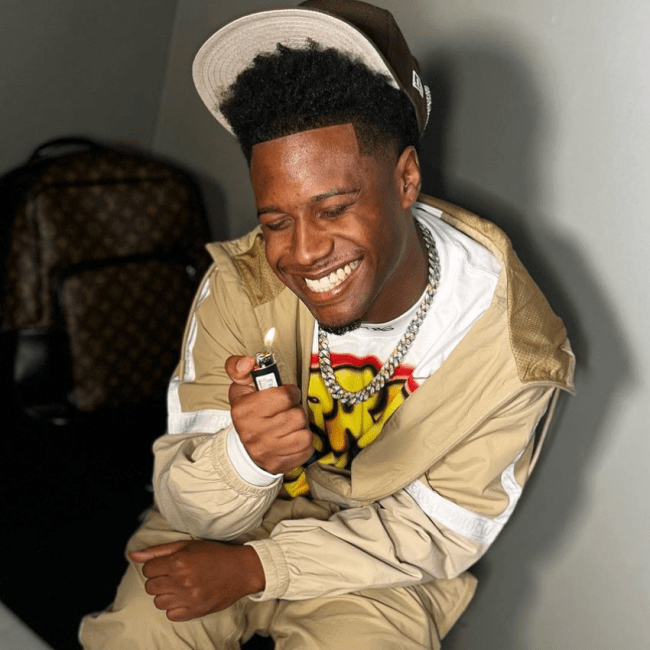 If the point of social media is to simply amass followers to spread your message or fill some existential void, then I suppose 1TakeJay isn’t doing so badly. The Compton, California rapper known for his clear delivery, assertive flow and light humor currently has 245K followers on Instagram, and 37.3K on Twitter. His relationship to social media is likely different from those whose income, unlike him, isn’t directly impacted by how many views, likes or attention he’s getting. On 1TakeJay’s latest single, “Social Media,” featuring the BlueBucksClan, he misses this point and sounds slightly outdated when mocking former MySpace users for not having had enough friends. On the chorus, 1TakeJay lists the various social media eras, beginning with MySpace and ending with Instagram, claiming you’ve been lame with no followers throughout it all.

The video shows him recreating the iconic Tom from Myspace avatar photo by rapping and posing in front of a white board. It nearly wins me over when the BlueBucksClan comes in, saying “you ain’t never had no hoes, I could never feel your pain,” and “yeah she’s popular on Twitter, but in real life these bitches lame.” BlueBucksClan is wise to point out that a person’s social media presence has never been an honest or decent measure of how cool they are. Influencers with popular accounts are often insufferable in real life, becoming neglectful and humdrum in person as a casualty of spending most of their time curating their online personas. Perhaps it’s because of this that I can’t shake the feeling that bragging about your social media following is itself lame to a certain degree. It shows that 1TakeJay might not be as with the times as we think; he didn’t even mention TikTok in the song and I can think of plenty of rappers with a lot less skill than him who do real numbers on that forsaken app.

Sada Baby raps with the ferocity of a man possessed; with such ingenuity and unpredictability that a three and a half minute song ends up feeling six minutes long. On “Akuna,” Sada Baby nimbly recycles through a series of animated flows like only he can, lowering and raising his voice in quick succession, oscillating between a seemingly outraged temperament and a whispered menace. Sada Baby’s signature dance moves have only grown more goody and pronounced, “Before I die, I want to party with Sada just once,” a Youtube commenter wrote. There are some days where I’m convinced Sada Baby is the best rapper in the world and others where I acknowledge the unevenness of his past few records. With “Akuna,” Sada Baby appears to be back with the type of low-boil banger he became revered for on 2019’s Bartier Bounty.

O’Way channels Suga Free’s signature sneer in “Slither 6’N,” a new single from the San Diego rapper that expands on his street single formula with a new set of wordy flows. “Slither 6’N in a new machine, who but me?, lil momma’ give me chili cheese,” he begins the song, with a pimp-like swagger that makes it feel as if I’m being swindled out of my time by listening at all. O’Way has always excelled at choosing what beats he raps over and this song is no different, centered around a booming bass that takes the place of a normal chorus as O’Way chooses to remain silent in between verses. It’s the single that comes closest to O’Way capturing the informal magic of his pre-prison raps from three years ago, each of which would gain over a million views over the years while O’Way finished a sentence in the California prison system.

OTM is keeping the antagonistic spirit of Drakeo The Ruler alive in more ways than one. The Los Angeles duo adopted by The Stinc Team in the weeks before Drakeo’s death recently had their debut album removed from DSP’s following a public dispute with JoogSZN and RONRONTHEPRODUCER over money the producers believe to be owed for beats. These producers who worked closely with Drakeo while he was alive, and were even present backstage the night he was killed, are just the latest Drakeo collaborators to draw ire from the young duo, following their somewhat publicized spat with Remble earlier this year.

Yet, infighting aside, OTM is against-all-odds continuing to release new music at a breakneck speed, with most of it see-sawing between good and great. It’s like they’ve been given access to a Drakeo The Ruler thesaurus, picking words and phrases at random and stringing them together to create something new and fascinating all on its own. On “For The Record,” featuring EBK Young Joc, the South Central pair compare themselves to John Madden, while Pisa dancing, and vowing to continue collecting uchies’. The natural chemistry between the two artists, with BluePesos hushed flow and Duffy’s clear punch-ins, dovetails magnificently with EBK’s assertive boasts. However, I can’t help but imagine what Drakeo himself would have sounded like on this track next to EBK, and while OTM doesn’t quite fill the shoes left vacant by the untimely death of California’s Hero, they’re a good reminder of just how influential and prolific he was while he was here.

“Run E Grung” is the latest single from Marksman, an impressive and genre-bending dancehall artist from the James Hill district in Westmoreland, Jamaica. He’s on an impressive run for a 18 year old, who was only 17 earlier this year when he went viral for his song “Verified Chopper 2,” an aggressive, yet bouncing take on dancehall that quickly racked up millions of views. “Run E Grung,” which features Nile and is based around a hard-to-forget flute sample, feels slightly more club-ready than his last single, “Antics,” but doesn’t compromise on the more assertive flows fans have grown to love with this year’s earlier singles.

Audio Push Releases ‘No Rest … For The Blessed’ EP