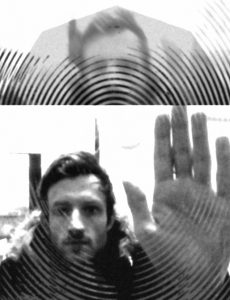 This month The Jupiter Room welcomes Stephen James Buckley aka Polypores into the mix and he has served up an amazing mix of drone, ambience, hauntology and noise. However, this is no ordinary mix, it’s a journey, an experience like following one continual track that winds and wends its way into the dark forest of misshapen shadows and the echoing calls of creatures in the treetops. Dare you look up? Well, The Jupiter Room did and this is what we found.

Much of his music has a retro science fiction vibe especially on 2015’s The Investigation which, like your favourite mad scientist episode of The Avengers, is packed with tales of fiendish experiments and the warping of nature. Spectral synth tones haunt each track and sound as if filtered through demonic EVP sessions and flickering monochrome.

Other aspects of his work delves into British folk-horror, as on A Shunned Place released on Concrète Tapes, drawing influence from composers like Fabio Frizzi and John Carpenter as well as more contemporary artists like Demdike Stare, Actress, Pye Corner Audio and The Haxan Cloak. Buckley incorporates slowed-down tape recordings of birdsong alongside drifting analogue synths, distorted drum machines and distant choirs. There’s an element of disquieting nostalgia among the tape hiss and witch-drums.

Polypores is also not shy of exploring cold war dread and the paranoia of the 1960’s throughout The Polytechnic Youth release The Fialka Transmissions. Snarling arpeggios, ghostly samples and chilly melodies create an atmosphere of retro-futuristic fear of mutually assured destruction, mind experiments and Government surveillance.

The self-released Timeholes and Timeholes 2 out on the Polytechnic Youth label both showcase Buckley’s instinct for slow-ripple ambience as do the Tangerine Dream-esque Wastes and Blooms/Mire releases both on Concrète Tapes. This wide array of styles and textures ensures Polypores doesn’t repeat himself. Each track has a ‘live’ feel, as if recorded in one take, thus imbuing each record with an immediacy allowing the listener to connect organically with the dark, often beautiful melodies and drones.

Live, Polypores eschews laptops and software instead utilising a hardware setup employing a slew of electronic equipment that warp and bend sounds; distortion pedals, mini synths, sound mixers, samplers and drum machines all summon space and depth. Buckley invokes samples that ghost in and out of the spectral realm as he weaves folk-tinged musical phantasms.

It is a heady experience with sound and visuals perfectly coalescing to create an overall immersive experience, something that is hypnotic and bewitching. Stephen Buckley has a clear vision for his music and knows how to create a spellbinding hallucinatory experience.

Ahead of his guest mix on the show, The Jupiter Room fired some questions at Stephen in order to find out more about his music, his influences and what makes him tick.

The Jupiter Room: Tell me about Polypores. Where did it come from?

Polypores: For many years I wrote and recorded songs playing guitar/bass/drums/keys and singing. They were sad songs. When my daughter was born 2.5 years ago I got less and less interested in lyrics. I started focusing more on a bigger picture, but at the same time a deeper picture. I started noticing different things about the world around me. I wanted to do something that wasn’t about the words, about my feelings or even me as a person. I’d done a bit of electronic stuff before and as that became more and more what I was listening to, it naturally became the kind of music I made too. Polypores are a type of mushroom. I was obsessed with fungus as a child, and it seemed fitting. They are a bit weird, there are a lot of varieties. Some are poisonous. Some are hallucinogenic. Some are beautiful. Some are just plain odd.

TJR: Tell us about the mix you’ve done for The Jupiter Room.

Polypores: I included a lot of ambient stuff, stuff without beats, which is harder to mix. It starts with one of my new tracks, which is from an album which will be out via Polytechnic Youth on vinyl later this year. I had to include Motion Sickness Of Time Travel because I’m in love with her music at the moment. It’s the most comforting sound I’ve ever heard. It’s like being in a womb. It’s music for getting foetal to. I built it up from fairly nice, comforting stuff to really intense, like that DRU$S track, which is Paddy Shine from GNOD. It’s heavy as fuck, but doesn’t even have a beat. Just a nagging synth sequence that repeats for like 20 minutes (I didn’t use all of it). Towards the end it comes back down into softer territory, which feels like a release after all that nastiness. When I put mixes together I like to treat it like a single track, building things up and bringing them down again, or whatever. 60 minutes of pounding techno has it’s place, and there’s a real skill to doing that, but I prefer to do it with a bit of variety. Probably because I don’t possess that skill.

TJR: Where do you draw your inspiration from, both musical and non-musical?

TJR: You utilise a hardware setup as opposed to using software, why is this?

Polypores: I prefer that way of working. It feels more natural to me. Whenever I’ve been creative, going all the way back to playing with Lego as a child, or painting grim pictures as a teenager, I’ve always liked to work in a visceral way. I like to move, I like to really get into it. I can’t do that as much with software. It’s more logical than emotional. I like to work emotionally, in a more immediate way. Get it out there.

TJR: You use back-projections during your sets, who creates these?

Polypores: I do. I just get a bunch of visuals together which I think will work for the live set. Once I have the timings loosely there, I will put them together in such a way that it fits the music. I’d love it if someone else could do that for me, or if there was some computer program that did it all automatically. But I’m neither rich nor powerful enough for that to happen.

TJR: Is there a particular time of the day or night when you are more creative/productive?

Polypores: Really early mornings are good for me. But I also do a lot of stuff at night. I’d probably be creative in the middle too, but I unfortunately sometimes have to do other stuff. It’s a real drag.

Polypores: Babies gurgling. Nick Cave speaking. Dawn chorus in the summer in the countryside. The sound of a 1960’s Ludwig drumkit through a fat compressor. The “Ooolah” on War Of The Worlds.

TJR: What are you listening to at the moment?

Polypores: At the moment I’m hammering a lot of stuff from Danny Wolfers’ old label, Strange Life Records. Some of the stuff he’s released under various pseudonyms is just brilliant, like Smackos and Occult Orientated Crime. This week I’ve had a fair bit of Karen Gwyer on, I love how liquid her music sounds, it’s very melodic and somehow emotional. I recently got hold of a Hoofus tape from Front And Follow Records, which is really good. Downloaded a soundtrack he did too. It’s deceptively simple, sounds like just one or maybe two synths, but he really knows how to work them. Today I’ve just listened to some early Oneohtrix Point Never. I love that early stuff of his, when it was just like a single synth recorded to tape, but it sounds massive.

TJR: What are you currently reading?

Polypores: Just finished Timequake by Kurt Vonnegut, and am currently re-reading Neil Gaiman’s American Gods so that I can start watching the TV series. Which has Ian McShane in it. What a man.

TJR: You release a lot of your music on old formats such as cassette tape and vinyl. Is your music more suited to these vintage analogue formats?

Polypores: I guess so. But I wouldn’t turn my nose up at a CD release, I’m sure it works just as well. I do really like the idea of physical releases, especially when there’s nice artwork and packaging involved. But I do love being able to release things digitally online too, because physical releases are very slow, I like to put a lot of stuff out quickly, cut out the middleman and all that. 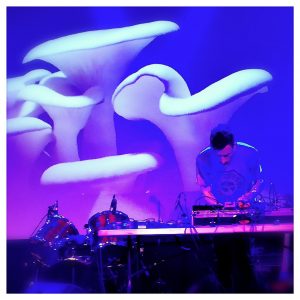 TJR: Do you see your music as soundtracks to movies that don’t exist?

Polypores: I used to say that, but then I noticed EVERYONE who made electronic music said that so I don’t really say it any more.

TJR: Do you compose quickly or do you spend hours tweaking and finessing your tunes?

Polypores: Very very quickly. The slow part comes afterwards when I’m mixing it. But in the last year or so I’ve been recording more and more stuff live. I write and record a lot more than I release. Rather than spending hours perfecting individual tracks, I just record hours and hours of music then only release the best of it. It’s more fun that way, I get to spend more time on the creation than thinking too much. Again, it’s more emotional than logical.

TJR: What’s next for Polypores? Where can you see your sound developing? When are you playing live next? Is there an album in the works?

Polypores: My sound has evolved a lot since the beginning, and will continue to do so. When it doesn’t I will stop. I’m not AC/DC. I get excited easily and bored easily, so it will keep changing. My next gig is at Glastonferret, which is a weekend festival that takes place at The Ferret in Preston. I’ll be playing outside on Friday 7th July. In terms of releases, there’s a LOT going on. I have an ambient album called Timeholes 2, which, funnily enough, is along similar lines to the first Timeholes collection I put out on CD last year. That’s coming out on vinyl via Polytechnic Youth in the next few weeks hopefully. Just waiting for it to be pressed. I will have another record out via PY later this year, which has already been written and recorded, just sorting artwork and mastering. I’m working on a couple of soundtracks, one of which is for a short film that’s almost finished. Then there’s a couple of feature lengths. And finally, I have at least 3 albums coming out under secret pseudonyms on various labels. There will be little clues on the releases so you can tell it’s me, but it’s more fun to keep it secret. I’ve done this once before and it was great fun, not to mention a lot of people bought the record, so I’ve decided to do it again. Every time I want to try something in a different style I invent a character and make music as him/her. Some of what I learn in making these records goes back into influencing Polypores. It’s all part of the same thing. I am a very busy man. Some might say obsessive….

TJR: Finally, if you could make music history, how would you do it?

Polypores: First gig on the Moon.

There you go, explore the music of Polypores, embrace the dark drones and haunted melodies, catch him live when and where you can. Enjoy June’s show, enjoy his mix, most of all keep embracing the underground sounds.

Polypores on the web:

Young Buck Is Out Of Jail & Talking About 50 Cent: ‘I Don’t Owe G-Unit A Quarter’

Queen Key Says 600 Breezy Got Her Pregnant With Triplets

TikTok Has Helped Steve Lacy Top The Charts. Could This Happen For Other Rising Artists Too?

Schoolly D & Ice-T Are Finally Hopping On A Track Together