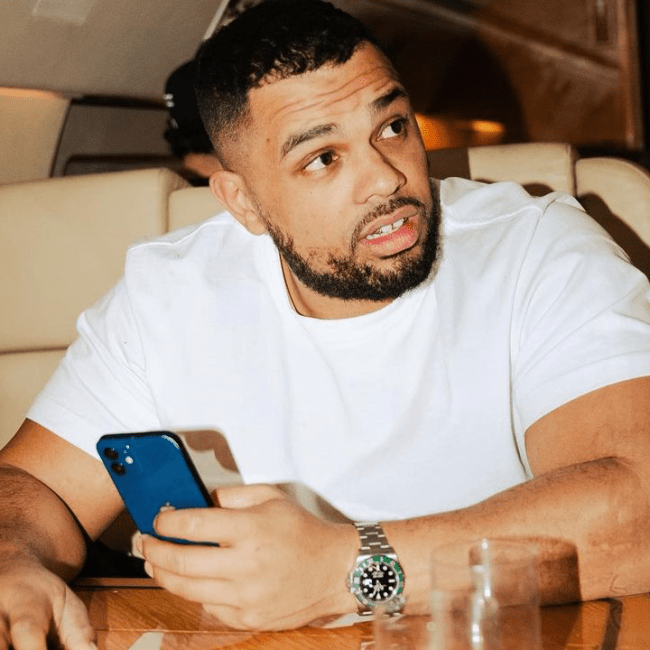 Ethan Herlock has no love for your District Attorney.

I found out about Florence Sinclair, a non-binary artist hailing from the UK when they promoted their recent mixtape, it’s a big man ting, on Reddit. IABMT is an excursion down an internet rabbit hole where you feel a sense of familiarity and otherworldliness; a gruff baritone voice warped through vocal modulations and a dog-eat-dog ethos over samples of classic grime instrumentals or serrated guitars.

“DLC riddem,” off their surprise EP, Fate Binds Us returns to that perspective. Sinclair writes via their YouTube page that the EP “tells a vague story of a young person’s PTSD”. Chime bells, eski-boy synths establish the grittiness of a grime time capsule while Sinclair’s lyrics lay down the dark, brooding atmosphere they’ve found themselves in: “Somewhere off the atlas/ dust off pon the mattress/ Aliens in my attic/ I got demons in my basement.” Are they stuck in the recesses of their darkest thoughts or are they stuck in a dingy room in an unfamiliar town? Either way, the isolation is just as crushing.

Sinclair’s anthropological eye doesn’t treat the drug-pushing roadman as a costume and instead weaves the agents’ apathy toward the drug trade while demonstrating the untapped potential these runners possess. In Sinclair’s eyes, the drug game is synonymous with the rap game and by sampling grime instrumentals with atmospheric soundscapes – their music sways with an almost hauntological and alt-grime pulse.

It’s clear Sinclair filters these tales through a second-hand perspective but understands the struggles of those trying to get their bread and butter whilst serving a back-hand for the fakers who put the Bad Man persona™ next to their Trapstar garms: “This is real life, not no DLC”, Sinclair smirks in the hook. If they’re hoping for a listener, it’s the ones who were raised different.

In a time of rising costs, wages sinking below the rate of inflation and a collective loss of self as Great Britain tries to position itself after Brexit. UK rap connoisseurs Blade Brown and K Trap are here to remind us that the shit does not concern them in the slightest; in fact, it’s even more reason to get yours by any means.

“1M” is a deep cut in Joints and one of the best highlights in the surprise eleven-track mixtape. It’s a vocal exercise in poker-faced flexes that’ll make your hard-working 30K job and cosy house-share in Finsbury Park feel worthless. The London-based stalwarts have chemistry that instantly clicks with each other as their chest-puffing bravado rides the ghostly bass slides and 808s supplied by the prolific M1OnTheBeat. Blade Brown uses M1 himself as a punchline to flaunt his wealth: “I’m like M1, they ain’t even seen 1 M” while K-Trap barks off about “not caring about charts” as their tape casually reaches Top 20 in the UK Charts. After shelling down a surprise Daily Duppy, the duo are inseparable like a Season 1 Avon and Stringer.

The coming-of-age ecstasy starts to dissolve away when you hit your 20s really – mistakes feel immortalised in stone, hard-learnt lessons gnaw at your soul and celebrations are met with trepidation and higher expectations.

After releasing his ambitious EP, ANKAMAN where the South London based rapper was on top of the world, detecting the bitch in niggas from their handshakes in his THC-infused raps. On “Hart.” David Armada finds the mask starting to slip off, as he stares sullen-eyed into the gulf of crystal-clear piano runs and boom-bap drums and admits to himself: “The biggest lie I’ve ever told is that I’m feeling fine/ Nah nigga, no way.” For Armada, the local studio doubles as a confession booth, a haven to spit philosophical observations, only to come out more resilient than ever, ready to face the tribulations growth will bring.

“Hart.” kicks it down a notch or two, it’s just as mellowed out to play in the background when you link up with your G’s and just as personal enough to balm your battle scars and contemplate whatever’s eating your soul.

By writing about Dean Blunt – I have broken the first rule of being a Dean Blunt fan – you don’t talk about him. You certainly don’t write filibuster about Blunt’s enigmatic approach to treating music as an object where he appropriates ideas and samples before reigning boredom, then spiraling onto the next idea like a vagabond. Instead, you discreetly queue “100” during the tail-end of a house party on its last legs and wait until either two responses from a drugged-out dude: A.) Nah this shit is jarring, beg someone turns this shit off, or B.) Yo, is that Dean Blunt?! If the answer is B, that’s when you talk about why Dean Blunt’s the shit.