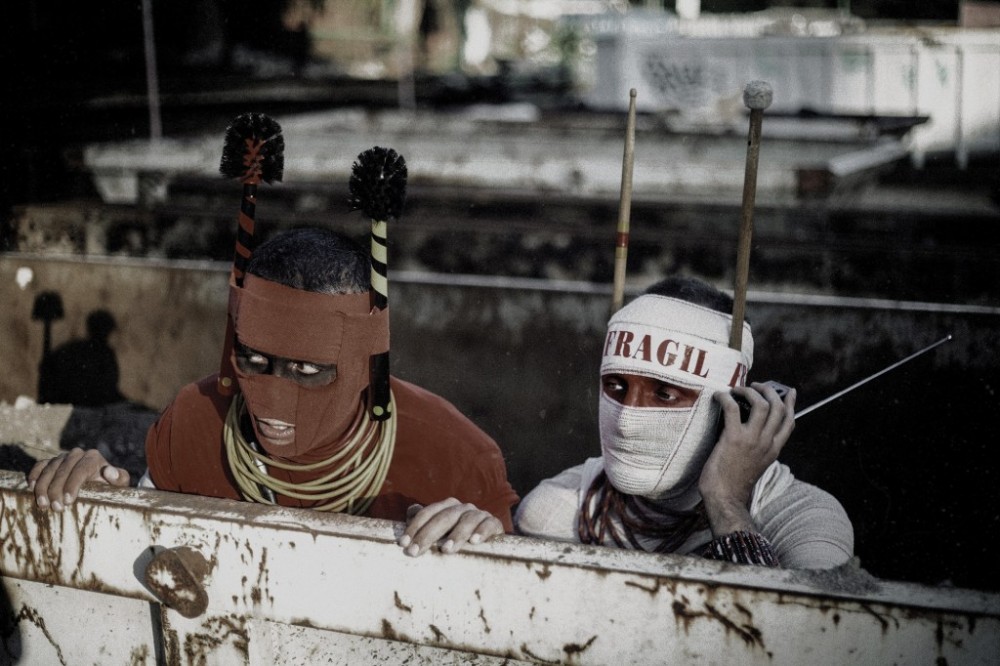 Please support our dedicated group of independent music journalists by subscribing to Passion of the Weiss on Patreon.

The DJ and the rapper. The music maker and the voice. A basic combination, but one that has produced some of the most potent hip-hop and electronic music of the past four decades. It’s that perfect dynamic of each part of the duo complementing the other while also challenging and pushing one another to seek greater heights and grander ideas.

That’s the creative relationship heard on the debut album by IKOQWE, a collaboration between Luaty Beirão, the rapper and activist known as Ikonoklasta, and Pedro Coquenão, the producer and DJ who makes music as Batida. The Angolan-Portugeuse duo make a fine noise by their lonesomes. Beirão’s 2008 mixtape ikonodamus is all soulful swagger and leering joy, while Coquenão’s work masterfully fused his African and Latin influences into a knee-knocking frenzy.

Joining forces as IKOQWE triggered new synaptic connections within both men. Their recently released debut album The Beginning, The Medium, The End, and The Infinite puts the global playlist on shuffle. While Coquenão began by using samples of traditional instruments and songs culled from the International Library of African Music in South Africa, he bent them into steaming, pulsating shapes that interpreted dancehall, dub, reggaeton, electro, and Afropop through a hip-hop filter. Beirão shapeshifts through it all, casting his lyrical gaze on the current sociopolitical landscape with the curiosity and wariness of a recently arrived extraterrestrial.

That last idea isn’t simply metaphorical. Another element that the pair have added into IKOQWE’s eruptive mix is the men taking on the guise of two aliens, named IKO and Coqwe, that have crash-landed on Earth and are musically expressing their observations of humanity. It’s not a pretty picture either. Songs like “Quarantena” and “The Medium (O Meio)” are pointed commentaries on the pandemic and how modern media serves to deaden abstract thought.

Beirão and Coquenão are holding so firm to these otherworldly personae that they would only agree to discuss IKOQWE if they could do it in character. So what follows is a knowingly awkward email exchange with IKO and Coqwe, two space creatures that are feeding some uncomfortable truths about our planet back at us. Here’s hoping we listen. – Robert Ham

What can you tell me about how this project began and how you landed in our time and on our planet?

IKO: Angola is one of the geographic locations we delved on the longest and a rather interesting case-study. That portion of land is governed by seemingly nitwitted trolls that try to keep hold of creative, constructive and critical thinking, so art in general is deeply impacted by a rather somber political atmosphere that artificially conditions greatness, which is palpable.

IKO: Angola is one of the geographic locations we delved on the longest and a rather interesting case-study. That portion of land is governed by seemingly nitwitted trolls that try to keep hold of creative, constructive and critical thinking, so art in general is deeply impacted by a rather somber political atmosphere that artificially conditions greatness, which is palpable.

Did you always know this was going to be a hip-hop project?

Coqwe: Cool you see it as hip-hop. Maybe it is because it is the most striking form of expression we detected over the last 40 something years. The closest to your ancestral ways we found. Unifies, celebrates, portrays, reinvents itself with everything and everyone’s contribution. Not sure we are strictly hip-hop though…

How does the songwriting process work for you? Are you starting with a beat? A sample? Is it a lot of trial and error to get to the finished product of a song?

Coqwe: Some are trial, others may be error. None is hopefully a finished product. It may start with an image, a newspaper, a movie, a word, a sentence, an old poem or a plain beat, electronic or recorded.

IKO: As the man said.

When do you know when a song needs lyrics/rapping and when they don’t?

Coqwe: It always has something to convey. The way it is said varies but mostly it comes out of our conversations and then it moves to something else. Usually IKO has this thing of starting to write. Others (Sometimes?) the Marrator forces himself into the story or it can be just movement but with intention.

IKO: Is often based on instinct and impulse. Sometimes we cook a beat not meant to have lyrics on and sometimes is the opposite, it starts with a lyric first. There is no mechanical process. Mostly it’s just us talking.

What inspires your lyrics? The music/beat? Trying to evoke a feeling? Trying to get a message across?

IKO: It could be one at a time, a combination of some, or all at once. Most times there is an underlying message we’d like to get across, even when it may appear we’re just trying to make a call to the dancefloor. It’s in our DNA.

How did you get access to the International Library of African Music? How did that inspire the sound of your music and the new album?

Coqwe: You have so many ways of reaching out. We could have used our Candongueiro Espacial but we decided to use email. Like now. They are doing a great work on preserving what was once almost erased. It inspires as a literal presence from the last time things were working as music being part of and serving the community.

How did you come to work with techno DJ Celeste Mariposa on this album?

Coqwe: If you arrive in Lisbon, not in the touristic area but on the south side, you end up feeling his presence. This instrumental reminds us of our travels at night.

The track you made with Celeste talks about the work of Marshall McLuhan – what can you tell me about your interest in his writing/theories?

Coqwe: Sounds timeless. I love Philosophy. I heard about him while monitoring Al Jazeera but Marrator is the one who into it. He is not available for interviews.

IKO: (Makes a sound that is not translatable to English).

What can you tell me about your headgear/masks? Where did those come from?

Coqwe: When I woke up I was already like this. Iko says we found a container full of accessories when we landed. It was Batida’s place to keep all things related to past works. We borrowed what seems most adequate to face this world now.

What can you tell me about the song “Quarantena”? How did you manage to survive the pandemic?

IKO: It was a song written in 2020 when there was a series of presidential decrees putting out seriously restrictive measures mostly unrealistic for a catastrophically managed plot of land such as is the case for Angola and there were only a meagre 19 confirmed cases in over two months. It raises questions about the virus’ nature (is it nature reacting to our insidious behaviour towards her, or a lab-cooked disease?) and how politicians take advantage of daunting periods like this to pass laws on surveillance and such, reducing democratic spaces and making oppression legal.

One year deep into the pandemic and being really hard to believe the official numbers of confirmed cases (should be much more than reported. My daughter had it and I had all the symptoms but they have never tested us), the death toll is just above 500. If you think that there are 76 children dying each day for starvation related issues, it kinda makes you wonder about the rationale behind the setting of priorities.

Coqwe: We both got the virus and were lucky. We did not stop to work and keep our heads and asses busy.

Do you think it was inevitable for you to make a politically minded album considering what you have seen here since arriving on Earth?

Coqwe: Is it political? How can you do it not political then?

IKO: I don’t think we could… the DNA!

Coqwe: Oh! You are right. We altered a bit of ours through time, introducing some stupidity and alienation but still…

What comes next for IKOQWE?

Coqwe: We have just arrived. I see that question in many interviews. It’s like asking an Egyptian that has just put his last stone on a pyramid. What now, Iko?

A Boogie Wit Da Hoodie Proudly Explains How He Went No. 1 Selling 823 Albums