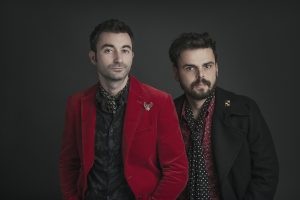 LA’s Ships Have Sailed have a knack for creating uplifting music, and their latest effort “Up” is no exception. Today, we have the pleasure of premiering the band’s ‘Lo-Mix’ – a mellow & exposed version of the original track that really brings forth the power of the song’s lyrics. Vocalist Will Carpenter utters, “Stand up…stand up…stand up” as the keys take you into a state of bliss.

“While the original version of ‘Up’ is really upbeat and optimistic to a fault, the song was actually born out of a low moment,” Carpenter explains. “As we were working out the different live arrangements for the track, including a couple acoustic arrangements, I had an idea to re-imagine the song as an exploration of the more melancholy nature of the lyrics. The first time I performed it acoustic, I realized I had to produce this version of the track as a studio arrangement as well, and so the first track on the ‘Mixed Up’ E.P. was (re)born!”

Ships Have Sailed will release their remix EP Mixed Up tomorrow (June 23rd), which features a variety of re-imagined versions of the single “Up.” Fans can purchase the EP right HERE.