The Brooklyn-based indie rockers Bear Hands are releasing their third album, You’ll Pay For This, on April 15th. The album reveals a sound that is more polished and mature yet retains all of its edge. An accomplishment made possible, in part, by the fact that the band’s line-up remains the four friends – Ted Feldman (guitar), Dylan Rau (guitar/vocals), Val Loper (bass), and TJ Orscher (drums) – who founded Bear Hands ten years ago. The music on You’ll Pay For This is intense and dreamy with lyrics that are sometimes snarky and always playful. It is an album that you’ll want to give a listen.

I had the chance to speak with Feldman last week as they were about to wrap up the “Spring Fling Rock AF Tour” with Cage The Elephant, Foals, and Silversun Pickups. We talked about the tour, the upcoming album, and some additional shows with Silversun Pickups in June.

You’re just about to finish up the tour – how’s it been?
This tour has been really fun. It’s been a short tour, but we’re hanging out with Cage The Elephant, Foals, and Silversun Pickups and it’s been great.

Have you been playing any of the new songs off your upcoming album?
We’ve been playing our two new singles, “2AM” and “Marathon Man” during our set and the response has been really positive. I mean it’s wild – the first day of the tour, the first time we played either of the songs live, and I could see some people knew the words to “2AM” and were singing along. And that’s an unbelievable thing, you know?

We also pop out to watch part of each band’s set at every show. The other day we were playing a game of basketball during Cage The Elephant’s set and we finished up right when they came off stage and were all sweaty and disgusting. I ran at Brad Shultz and jumped on him and then he insisted on carrying me out on stage for their encore [laughs]. It was really fun to experience the roaring crowd that they get demanding an encore. But I didn’t stay out for their encore performance. I didn’t want to take all the attention away from them [laughs]. 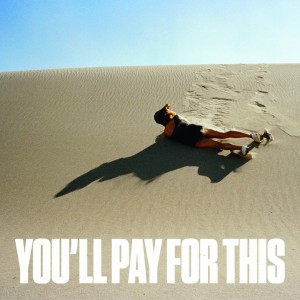 Your album, You’ll Pay For This, is dropping April 15th. Tell me a little bit about making the album – the motivation behind it, the process of writing it, and why you picked that name.
[Laughs] Well, we picked the name because it was funny and we liked the idea that there were a lot of ways to look at it. I mean it’s not a rock opera about Spotify [laughs], but certainly the state of the music industry is one element. But I also liked the idea of a theme about consequences and revenge. And really it just came about when we were making a joke that some day we would end a set by yelling, “You’ll pay for this!” at the crowd. And then that sort of became the name for the album [laughs]. There is no one reason for the name, we just thought it was funny and feel like it fits.

As far as the process of making the album, this was the first record that we’ve made where we knew in advance that we were going to make it and knew that we had the time to do it. This was a more directed endeavor than in the past when our album-making process was more like us cobbling songs together and hoping it would work. With our previous record we built a little more of a fan base, so we knew that we were going to be able to make and release this album. I mean, just the fact that there was a budget and there was time set aside to make a record was a big change for us.

What was the hardest song on the album to write?
Well, the track that was finished last was “Like Me Like That.” It took a while to come together. It was sort of something else before it changed at the last minute. The way we write is by interfacing with the computer and chopping things up and recording. So we had done a lot of pre-production for this album and had a pretty fleshed-out demo before we dove into the real recording process. The song was essentially done, but it wasn’t quite working and not everyone was satisfied with it. It was kind of disappointing because I knew that it was good and that there was something there that I didn’t want to lose. So I did a major rewrite after most of the recording on it was already done – chopping up bass and drums and rewriting the chorus – and it became the song it is on the album. “Boss” was another track that went through a lot of changes to get where it ended up.

“Boss” is one of my favorite tracks. Listening to the album it is striking how each song has it’s own sound and flavor, yet the album hangs together and has the Bear Hands vibe.
We approach songs very individually and want each one to have its own identity. And while I’m glad the album ended up being cohesive, I think that is more a function of “it’s us” playing the songs because sonically, we really try to do something different on each track.

So what is the first ever Record Store Day Crawl and how did it come about?
Someone asked us if we wanted to do it and it sounded like a fun idea. We are going to be hanging out on a bus with fans and strangers and playing a bunch of songs. Sort of like an all-day “meet-and-greet” where we will play a couple tunes and eat tacos as we travel to some of our favorite record stores on a bus.

What can fans look forward to for the rest of 2016 and what’s the best way to keep up with news about the band and your schedule?
We are doing a couple festivals this spring and summer and are hoping to add more shows to our schedule. We also have some upcoming radio shows that we are doing in Florida and we just announced a week of shows with Silversun Pickups in June. And we are going to make a video for another song on the record and hope to do a lot more touring. We are still working on getting everything put together. We are active Twitter and Instagram users, but for real information our Facebook page or our website – especially our Bear Hands e-mail list – is best.

The Making of Aesop Rock’s “Daylight”