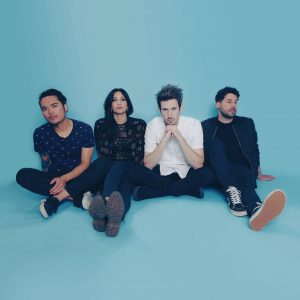 Parade Of Lights, the Los Angeles-based powerhouse electronic band, has a new single out, “Touch.” Known for combining heady synth-pop and epic stadium rock into a hook-filled alt-electro hybrid sound, the group first burst onto the scene with the release of their debut album, Feeling Electric, in 2015. “Touch” is the first new track from Parade of Lights since then, and it does not disappoint.

On this 80s tinged synth and hook-heavy, summer anthem, lead vocalist and guitarist Ryan Daly, bassist Randy Schulte, keyboardist Michelle Ashley, and drummer Anthony Improgo deliver a big summer song about yearning and love. “Touch” is the kind of song you play while driving to the beach – loudly, with the windows down, and singing along at the top of your lungs.

Parade Of Lights is set to release more new music soon and we can’t wait. In the meantime, you can check out “Touch” below.