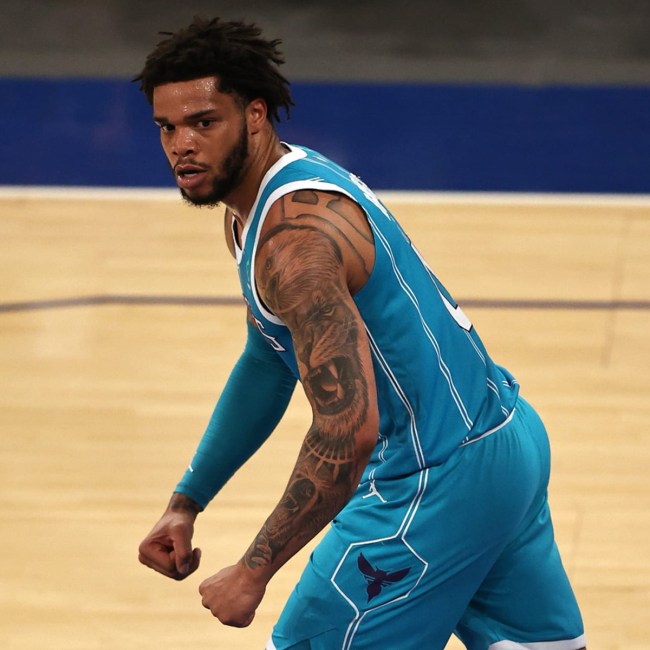 The NBA is back and so are the hoopers who wanna be rappers and vice versa. Luckily our staff of talented writers will be chronicling both for the foreseeable future as long as you show your support by subscribing to Passion of the Weiss on Patreon.

Kevin Yeung wants you to know that Lil Baby had the courage to attempt one more viral TikTok dance than most ever will.

Perhaps the two most memorable things that Miles Bridges has ever said came from last year’s “Steph McGrady” music video, when he said, “I just popped a bean in the club and I can’t move,” and “I ain’t throwing ones in the strip, I got CashApp.” That video blew up on Twitter, off some potent mix of people realizing that Bridges raps and people realizing that he just said he popped a bean in the club and he can’t move. Mostly known for playing on the Charlotte Hornets and poster dunks like that one time on Clint Capela, Bridges also moonlights as RTB MB, another one of Flint’s rappers making music so twisted and filthy that you’d think it would never be allowed within a mile radius of the arenas around Adam Silver’s NBA. He dropped his latest mixtape, Halftime, last month before training camp. TBD if the league’s anti-drug program will try to get him for this one.

The history of NBA players to have tried a rap crossover is extensive, and in most cases taken as a gimmick. That isn’t unfounded. Athletes talk in cliches, in a strain of determined Kobeisms that can be an effective ethos when you’re in the gym at 5am grinding your hesi pull-up to perfection but otherwise makes for boring conversation and worse lyricism. As a genre, NBA rap has been mostly weighed down by banality and bad jokes. (Delonte West, bless his heart, is the exception.) I had a decent enough time listening to some guys, but it’s still novelty more than anything original. Stephen Jackson wore his UGK appreciation with pride and it’s hard to hate on anything Lou Williams does in general, but the only reason you would listen is because they’re Stephen Jackson and Lou Williams. Players can have the resources to make music that sounds professional, the connections to get the industry’s biggest names on their songs and the platform to get their shit heard, but a hook from Raphael Saadiq isn’t a substitute for rap you really want to listen to. Coming from that, it’s honestly refreshing to hear Bridges rap about how much he loves hearing the clip slap into his Glock because it’s therapeutic. Dame D.O.L.L.A. could never.

Bridges isn’t an NBA rapper, with all of the baggage that label comes with, but instead someone who just sounds like where he’s from. His peers are regional, not just other basketball players with a passing interest and the means to fund them. You could put RTB MB on the same playlist as Sada Baby, YN Jay and Nuk — all rappers from the upstart Michigan rap scene that he’s worked with — and he’d sound right in the mix. Bridges hails specifically from Flint, Michigan, where the rap music is street rap with the sort of delirious dirtbag humor about money, sex and guns that an NBA player could only make after abandoning all pretext of being an NBA player. Bridges makes music that the league could fine him for, and then he would probably turn that into a bar, too. He’s the one degree of separation between Adam Silver and the Coochie Man.

Like any other Flint rap album, Halftime rests on the merits of its punchlines, and Bridges is fucking funny. I can’t believe the things he says, and the frequency with which he says them. A minute into the tape, he raps, “She said all you do is try to fuck me MB, I said type shit.” On paper, you aren’t supposed to like Flint rappers. It’s a literary genre of things you probably shouldn’t say, and it wouldn’t work if it wasn’t funny. Bridges can find humor in the plainest things. He raps like a live feed of the things that cross his mind, so, mostly, pistol attachments and the IG tendencies of the women he’s around. On one song, he raps, “Missed the opps last week so I went and changed optics,” and on the next, he goes, “I can’t even shoot the Glock unless that back part attached!” Gilbert Arenas, eat your heart out.

Almost half of the tracks on Halftime come from Bridges’ frequent collaborator and damn near institutional Flint producer Enrgy, who has backed just about every rapper from the region with melodic but frenetic beats that sound like rap music filtered through a funhouse mirror. The track “AF1” is a flip of the Enrgy-produced beat from YN Jay’s “Magic Stick,” which ends up in a LeBron James IG story of all places. The tape’s other producers, including Marc Boomin and LeeChoppn, will be familiar to anyone who’s listened to Sada Baby or Rio da Yung Og. Bridges’ flow is more in the vein of Babyface Ray’s at-ease style, which wears well on someone who played 1,932 minutes in the NBA last season for a day job, but he’ll pause on the beat mid-lyric and repeat lines (“DX,” RangeRov”) in what feels like another homage to YN Jay. There’s a bedrock of regional appreciation that’s genuinely more than just skin-deep, and it legitimizes his music. The pick-up runs with Sada are just bonus.

For now, Bridges probably doesn’t bring anything new or profound to the scene, like a Coochie Man-level commitment to the bit or Bfb da Packman’s completely unhinged comedy, but he could get there. It’s scary how fast he’s getting good at this. His earlier music, like 2019’s King of Ace with former Hornets teammate Dwayne Bacon or last year’s Up the Score, still makes for good listening, and it felt like he was finding a groove on more recent loosies. Bridges becomes more and more audacious with every new release, as if each retweet for his music frees him from the shackles of NBA player brand-consciousness just a little more. Now, he’s on “Hypnotize” rapping about “a Cuban mamacita” he had sex with and then trilling on the beat for no reason other than he can.

Rappers have been prosecuted over lyrics, and in some conceivable future, the league could try to crucify Bridges for his. It’s a neoliberal construction of the sports-industrial complex that the athlete should exist as a brandable role model, but Bridges isn’t trying to rap like someone you should aspire to be — he just wants you to laugh. The city of Flint has been ravaged over decades by white flight and capitalist ruin, from deindustrialization and disinvestment during the decline of the auto industry to the interconnected links of poverty and policing that continue to ensnare its predominantly Black population today. Flint’s rap music and its specific sense of humor was something that rose from those conditions to become one of the most popular local scenes over the past few years. If it’s exciting to hear Bridges crack wise about sliding on his opps, that’s because it still feels more anchored in something real than the sanitized athlete-motivation bars we’re used to from NBA players that rap.

Lowkey, Bridges was just a few percentage points off from a 50/40/90 season last year and improved his defense as the sort of switchable 4 that’s en vogue in modern basketball. Right now, the Hornets probably shape up as, I don’t know, one of the stronger prospects to get out of the East play-in round? With LaMelo Ball, Terry Rozier, P.J. Washington and now Kelly Oubre Jr. on the same team as Bridges, this year’s Hornets team is like if you left a hypebeast in charge of roster construction. If we have to wait until next offseason for another Bridges tape, then I’ll take some peace in the fact that Gordon Hayward is going to be absolutely sick in that locker room listening to RTB MB trade bars with Sada Baby on full blast all year.

50 Cent To Taraji P. Henson: ‘If You Don’t Roll With Me, You’re Gonna Get Rolled The Fuck Over’

Rich The Kid Gets Engaged To Tori Brixx