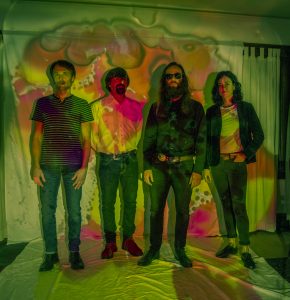 Tomorrow morning, Seattle psych/garage rock band Low Hums will release their new album Night Magic Wine on Union Zero. Today, we’ve been privileged with a sneak peek of the album, which can be streamed below.

The 10-song effort was produced by the legendary Jack Endino, who was most notably behind the boards for Nirvana’s Bleach and Incesticide, among countless others. It teeters on the line of psych and garage rock, portraying a carefree yet very calculated rock n’ roll semblance. “[Jack and I] have known each other for a pretty long while,” vocalist Jonas Haskins said in an interview with Paste Magazine. “When we got the songs together to record I was thinking: ‘This is the perfect record to approach Jack with!’ He did a lot of the older Sub Pop releases, which I’m a big fan of, and he’s a master at making great rock and roll records.”

Be sure to pick up your copy of Night Magic Wine tomorrow via Union Zero, but for now – stream it below and enjoy.

Interview: Little Brother Explains Why They Kept "May The Lord Watch" A Secret

Madlib Willing To Do A Beat Battle With Alchemist By His Side?

Azealia Banks Tearfully Claims A Neighbor Pulled A Gun On Her