There is always an element of fate and coincidence in the formation of any band or music project.  In the North West UK specifically, we’ve recently seen films Nowhere Boy and England is Mine depict the circumstances around key meetings in musical history and allow us to reflect happily on the existence of songs like “A Day in the Life” and “How Soon is Now” while considering the ‘What if?’s that could have made things so different without them. 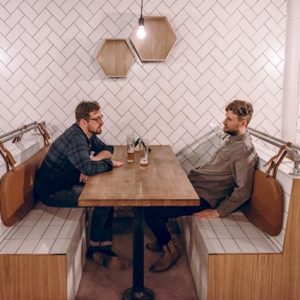 In Manchester again, there is a certain serendipity to the formation of San Eco.  Tom Edney and Morris Cowan had been gaining some headway as individuals; Tom’s indie songwriting and Morris’ electronic innovation had both been championed locally and on BBC 6 Music.  However, it was the chance encounter after hearing each other rehearse in adjacent studio rooms that led to the creation of San Eco.

With their different stylistic roots there’s an inevitable crossover sound which again echoes some of Manchester’s past heroes.  The baggy era combined indie and dance to great success but this isn’t simply a revivalist sound though.  Unlike, say Cut Copy’s Free Your Mind which was essentially an early 90s tribute album, San Eco’s debut has identity in spades, with off-kilter surprises leading the listener through familiar and unchartered territories.

To me, the album is a reminder of two releases from the year 2000:  Since I left you by The Avalanches and Badly Drawn Boy’s The Hour of the Bewilderbeast.  Given the coming together of indie and dance components, this sort of makes sense but it’s all about the amount of ideas (often in the space of one song) that drives the album and its replay factor.  Unlike The Avalanches, San Eco don’t rely on samples to mix things up, but throw in genre and time changes to keep things interesting.

Tom spoke to Fourculture about the ‘mix of approaches ‘ where creating San Eco songs is concerned:

‘Songs like “Perspectrum” and “Pretty Curtains” were very much written/structured by me on guitar, then laid down barebones in the studio, then we’d have a few sessions bringing them to life, getting busy with the beats, synths, guitars and wash of sounds that Morris has at his disposal. Then we’d just keep working and working on them till we were happy all the individual parts sounded right and were in the correct places.
Other songs like “San Eco” and “Infiniloop” were initially Morris Cowan sketches that were passed onto me to listen to and go away and make songs out of… they were the most fun ones for me personally, like a little assignment or challenge…”

San Eco is a Murakami novel of an album, throwing in surreal twists, with loops weaving in and out of your subconsciousness, familiar echoes that linger and then fly out of reach, melting into new sonic waves of goodness.

“Love of Fate” is a prime example, its woozy beginning like something being piped into your mind at 3am before it builds into an uplifting chorus with stops and starts. ‘Is this what you want?  What you want to be? Nothing no more, a distant memory’ Tom sings over a trippy kettle drum backing.  It’s an amazing voyage of sound which ends too soon when a dubby bassline comes in with the potential to ramble more into 90s The Orb territory.

Tom lists the main San Eco influences as artists with that hazy, reverb-heavy sound like Deerhunter, Animal Collective, Atlas Sound and Panda Bear. You can hear this in the singles “Pretty Curtains” and “OPM” where synth lines weave over a dreamy vocal.  San Eco also play with structure and expectations “Perspectum” with all its retro, slightly disco sounds has an initial breakdown which later becomes the chorus.  “Quarter Past Midnight” seems like a straightforward pop song on the surface, yet the skittering beats make it unusual and illogical, taking it to a new place via the train carriage-style percussion.

With an indie/dance crossover it’s tempting to be lazy in descriptions and you could make a case for throwing lots of bands together in an ‘Elbow meets Slint’ or ‘Beta Band meets LCD Soundsystem’ kind of way.  It would sometimes make sense but it undermines the variety on display throughout the album.  There is also a slight ‘Manchester’ sound to the San Eco sound which is to be expected as the city is a major influence in a nostalgic way, and not always musical.

‘”San Eco” the song is inspired by Gorton Monastery and that part of town generally.’ Tom says.  “Pretty Curtains” is pretty much a homage to Manchester, and how even amongst all its drabness, there’s always something to capture your imagination. “Infiniloop” is also about how I’ve managed to follow in the trail of my family tree around South Manchester… especially when I unknowingly moved into a flat (where my friends had lived before me and that I’d had many a party in) that my grandad and uncle were born in over the road.  I never got to meet my grandad so was a bit spun out to say the least!’

Tour dates will be announced in November and the good news is that more music is planned for the future. ‘We’ve scored out a few new tracks already.’ Tom tells us.  ‘Morris is moving to Cornwall this year so we’re planning on getting some recording sessions on the go down there, as its literally a mecca for ambient electronic music… seems like a better place than any to record our follow up!’

San Eco is out now on Beatphreak records

03 Greedo Teams With Travis Barker For "Meet The Drummers" EP