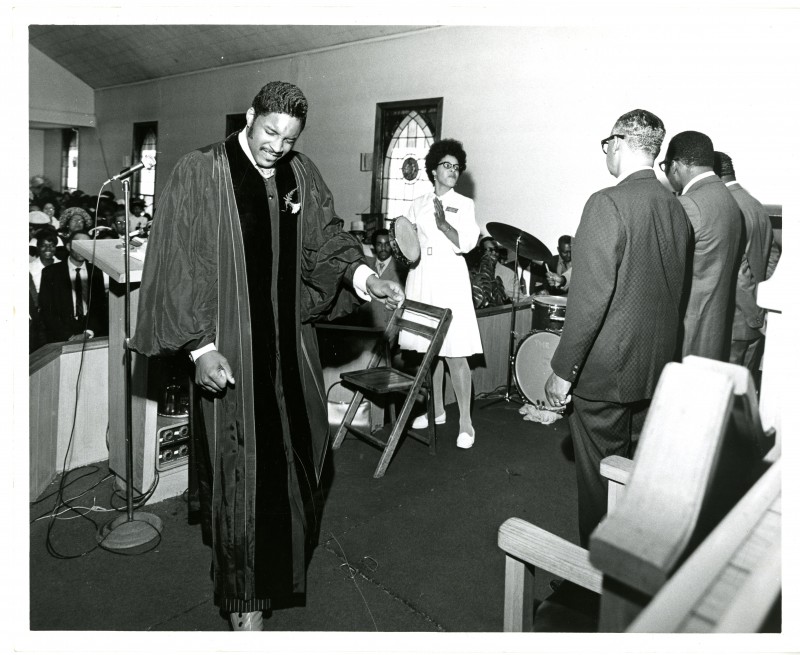 The passion part of “Passion of the Weiss” is real. We mean it. Donate on Patreon.

Jordan Ryan Pedersen is coming down from Sunday morning.

I was Christian until I was 30. But no, this is not one of those “that person who loves hip-hop and Bernie Sanders on the internet actually grew up evangelical” stories.

I grew up in a denomination called the United Church of Christ, which emerged in the late 1960s as a response to the stultifying dogma of Christianity at the time. Its pews are peopled mostly by old hippies – the real ones, the kind who grow their own hemp and only watch PBS. The church I used to go to in Chicago was part of the sanctuary movement in the 1980s providing refuge to Central Americans fleeing political violence.

The man who led the church at the time was a sort of half-pastor/half-labor leader who’d organized Hormel workers in the unsuccessful strike of 1985-86. He cast a kindly professorial shadow with his long gray beard and widows peak, but he would blaze with righteous indignation – earned and never performative – at the mention of the complacent powerful who contributed to the misery of common people. One of his most frequent touchstones in his sermons was the theologian Walter Wink, who coined the phrase “the myth of redemptive violence.” The leaders of my church were as much scholars as they were religious figures. A close friend of mine who’s the pastor of a church in Sheboygan, Wisconsin had to choose between seminary and a PhD in renaissance lit.

My life in the church was about social justice as much as it was about faith – actually, it turned out, a lot more. For me church was as much the clearinghouse for volunteer opportunities as it was a place I went on Sunday mornings to “worship.” I never liked the word “worship.” I don’t think I ever once “worshipped” during any of the hundreds of church services I’ve attended in my life. I can’t think of a single time in my life that I was emotionally moved by any part of my religious experience. I liked good sermons the same way I liked listening to lectures by my favorite professors in college, or the same way I enjoy a good podcast.

The first exposure I got to the evangelical world was, like a lot of people, through the movie Jesus Camp. I regarded it the same way I do reality TV: as a window into a strain of humanity I have no interaction with and find it difficult to believe actually exists. But Lil B gifs aside, those kids really believed that stuff.

Then I got really close to that world. I dated somebody – thought I’d marry her actually – who believed with every fiber of her being that the only thing that really mattered in life was whether you believed in Jesus Christ. I watched the fire burn in her eyes when she talked about her faith; I listened to people at the church she led cry, I mean really weep over their love for Jesus. And I realized in the process that I didn’t actually believe in “Him.” I liked Jesus as a metaphor for people who were too radical for their life – spiritually, politically, artistically – and died for it. Jesus was Malcolm X, Martin Luther King, Tupac, Kurt Cobain. Whether there was actually a singular man named Jesus Christ or whether he was the son of god never mattered to me and still doesn’t.

This is going to sound damningly naive. But before I got close to that world, I thought, I dunno, evangelicals – the ones speaking in tongues in Jesus Camp – were doing it as a bit? Church was just so not that for me. The most convicted progressives I know are the ones I know through church. Stupid, I know, and there are persecuted – or just plain hectored – Jews, Muslims, and well, not-fervent-enough Christians, lined up around the block and stretching back to 0 AD to attest to how it was, really really, not a bit. I underestimated the zealotry of evangelicals, ironically enough, because of the church I grew up in.

This is not to cast aspersions on the music Pastor T.L. Barrett recorded in the 60s, 70s, and 80s – earthy gospel influenced as much by Sly Stone as Mahalia Jackson. Nor is it to look askance at his ministry – he still leads the Life Center Church of God in Christ in Hyde Park on the south side of Chicago – or the man himself. In 1998, Illinois House of Representatives honored Pastor Barrett for his contributions to civic life in the city of Chicago – the same year he was also required to finish repaying $1.2 million to his congregants for what the Cook County Circuit Court decided was a pyramid scheme. He’s also got a street named after him in Chicago. On the cover of Numero Group’s new retrospective box set I Shall Wear a Crown, that’s Reverend Jesse Jackson sitting in the front row, looking giddy and awed in equal measure. A complicated but undeniably powerful legacy.

This is all to say, rather, that whenever I hear a gospel song used in commercial for, say, Under Armour, it makes me want to throw up.

Gospel is often used – frequently by white directors like Harmony Korine in the case of that Under Armour commercial – as a shorthand for a kind of inspirational black success story, a modern Horatio Alger myth in a throwback and vintage Jordans.

But gospel is the music of the true believer, of the preacher who evangelizes because he believes that saving your soul is the thing that matters more than anything in life. It is not the inspirational backdrop for your telecom company’s eyewash about grassroots movements. It is not mood music for your vision board.

This is not to say that Pastor Barrett’s music is not worth celebrating. On the contrary, it’s everything you could want from music: invigorating, inventive, elemental. But to view it simply as the soundtrack to a movie in your head about life on the south side of Chicago, and not as a ministry of someone who wants to save your soul, it cheapens the gravity of what Barrett is trying to do. This music is a lot of other rock crit adjectives. But more than anything else, it’s holy.

The tone of most stories about Barrett strikes me as patronizing. “Look! Here’s this old pastor who Kanye West sampled!” (You can find the track, I’m not linking to Kanye West in the year of our lord 2021.) A Vanity Fair profile from 2016 devotes only a couple of sentences to Barrett’s theology: “[My church] is unequivocally and unapologetically a ministry of the here and now. We do not teach that God is in the sky; we teach that God is in your eye. I use music to attract the young people like the Pied Piper attracted rats.” That’s positioned more as a soundbite than it is a laudably transparent statement of purpose. Elsewhere the piece refers to how Pastor Barrett’s “theories about the Realm of the Infinite Now [are] definitely more Doctor Strange than traditional doctrine.”

Vanity Fair doesn’t care about what Pastor Barrett believes. He’s a side show to them, a human interest story. Remember when Barack Obama’s long-standing association with Reverend Jeremiah Wright and the Trinity United Church of Christ – yep, that was my denomination – was color for Obama’s back story? (Wright is where he got the phrase “the audacity of hope.”) Remember what happened when they learned what Jeremiah Wright actually believed?

Pastor Barrett sums up what he believes in a heartfelt and frequently funny sermon he gave in 2015 to celebrate the 59th anniversary of Chicago’s Christ Universal Temple: “I give all praises to almighty God who is my life, not just the head of my life, He is my life. Because in Him I live, I move, and I have my entire being.” He means it. “I just wonder if we have proper appreciation for the word of God,” he says later on. “Jesus is waiting, O Sinner,” the Youth for Christ Choir sings on “O Sinner.” Do you get that he’s not kidding? Pastor Barrett’s faith is not window-dressing in a story about a quirky sample source. It is the point. Do all people who define themselves as Christians see the world in terms of heaven and hell, sin and repentance? No. I didn’t, even when I still thought of myself as Christian. But it seems like Pastor Barrett does – or did in the music here.

My experience with religion has made me particularly attuned to the inclination not to take faith seriously. No, I will not go to the House of Blues gospel brunch – yes, that is a real thing. Because I don’t believe. If you want people to pour out their hearts and souls about what they believe to their very core while you eat Eggs Benedict – and then walk away unchanged – you’re a tourist. I’ve been a tourist before. I went on a field trip with my lily-white congregation to Jeremiah Wright’s church, and hallelujah’d and amen’d along with everyone else, even though I didn’t believe it. It was gross. I’m ashamed to admit it.

Do I recognize the power of Pastor Barrett’s music? Absolutely. But it’s hard for me to listen to it. Because I don’t believe.

This is a statement of faith by a man convicted. Behold it with awe, and with care.

No, Ariana Grande Did NOT Get Paid Double What Beyonce Made For Coachella