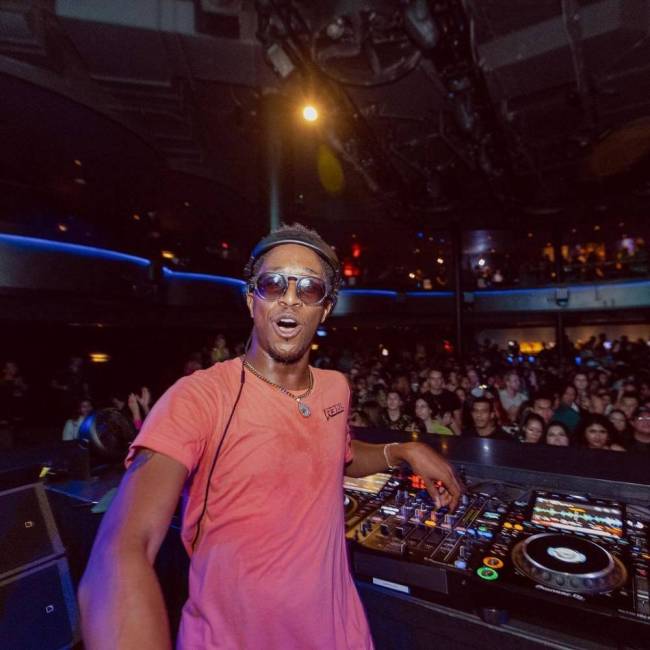 PinkPantheress and Sam Gellaitry – “Picture In My Mind”

There was only one person who could save us from over-eager pop superstars making middling pop-dance music (except Pi’erre Bourne’s “DJ in the Car,” that’s good), the queen of England herself, her royal highness, PinkPantheress.

PinkPantheress’ debut album, last year’s to hell with it , was best dance album put out last year. (Read all about it here). Whether it happened to be a direct influence on a certain Toronto Raptors fan and avid pop art collector and Mao Zedong aficionado, and another prominent Houstonian sibling who makes music for the exploited workers of her husband’s business, is something between them and God, but it’s hard to think that “Just for Me” or “Break it Off” didn’t float across the Atlantic and at least perk their ears to the possibilities of borrowing, let’s say, some of her ideas and aesthetic.

But while they’re still playing with that, she’s already onto the next idea. This time, that idea is to make UK garage meets diva house pop with Scottish producer Sam Gellaitry. It kinda sounds like an r/futurebeats gimmicky thing on paper, and to me, Sam Gellaitry’s productions often slip into that mode too easily, but the big glistening piano chords that almost get sidechained to death, the shuffling, slightly UK garage drums, and the bulbous bass line work perfectly for PinkPantheress’ confident whisper of a voice, something that nobody can copy from her.

Atlanta natives Chris Ivan and Stefan Ringer are spreading the gospel of Detroit house music, and maybe a little P-Funk, to the dirty south. “Heels On” is roller skating backwards at the rink on Saturday night encapsulated, from the shuffling drum groove with deep bass drum hits, to the funky Moog-y fat synth chord progression to the “hum… umm hmm” grunts that kind of sound like the “Shades of Jae” adlibs.

Do they make roller skate clip-ons or something for people wearing heels? If they don’t, they need to make some to accommodate this track like it should henceforth be accommodated in every roller skating rink still out there.

Piling on distortion until your track sounds so compressed that it sounds like it’s blasting out of a Nokia phone on full volume in a subway car is kind of an underground dance music thing that seems very in style right now. I’ve never heard the aesthetic applied to ballroom/vogue music until I heard this track, “Dive Ha” by DJ Twinkle Toes, and now I’m hooked. This shit sounds so cool.

It’s as basic as the title suggests, take a chop of Victoria Monet’s sultry vocals and Jersey club influenced soul on “Diva,” THE ballroom/vogue must have crash sample from Masters at Work’s “The Ha Dance,” add some heart pounding bass drums, turn up the distortion on everything, and you got a sick ass track like this. Thankfully, DJ Twinkle Toes seems to put out ballroom/vogue remixes on their Soundcloud page every couple of days with similarly audacious and fun remixes to meet our needs.

Thinking about the thousands, if not tens or hundreds of thousands, of mixtapes uploaded to Soundcloud, Datpiff, and deep in the trenches of file sharing services like MediaUpload (R.I.P.) or Mediafire, that have been obliterated when those sites are taken down, destroyed through copyright infringement lawsuits, or those that could potentially be just generally lost to history in the great digital void, keeps me up at night.

Just think about it, vast archives of essentially folk art from all over the world wiped from history because of overzealous prosecution of regressive and oppressive American copyright laws – or media oligarchs working with the government to stamp out any form of alternative to their power – or some kids get sued for rapping over a copyrighted beat, or chopping a copyrighted popular song into a footwork track. Whole libraries of Alexandria burned to the ground, most of it probably disappearing from the internet without being saved or archived on a medium that will last past the next Windows update.

Anyways, somebody needs to start a mixtape archive to save hip hop and dance mixtapes from being lost forever. Download them before they disappear and burn them onto a CD or something so future generations can experience the fun of musical piracy, of hearing Lil Wayne rap over Little Brother beats, or DJ DMAN chopping George Bush, “God Bless the U.S.A.,” and Christina Aguilera into a footwork classic, or DJ R3LL and DJ Kiff, two teenagers from Newark, New Jersey, turning the jock classic rock of AC/DC into a Jersey club banger near the very beginning of their Cuff Yo Chick mixtape.

Uploaded to Soundcloud in 2011, this mixtape is a non-stop barrage of popular songs from the early 2010s, and some deep cuts like an outrageously fun remix of Slum Village’s “Selfish,” chopped with Jersey club breaks, stuttering samples, loud DJ tags, and of course, the signature Jersey club “bed squeak” sound. DJ R3LL and DJ Kiff, both of whom were sophomores in high school when they made these tracks, are expert DJs, able to move seamlessly and logically from seamlessly illogical Jersey club remixes of Keyshia Cole to remixes of Drake.

Apparently, this was too much fun for the music industry to allow people to enjoy, and soon enough DJ R3LL and DJ Kiff were forced to remove the mixtape from Soundcloud after getting multiple takedown notices from major music labels. Thanks to 2 B Real records from Manchester, England, the mixtape lives again on Bandcamp, but for who knows how long? Download it while you still can and keep it safe.

How many hours of day does Arca sleep? Does she have hobbies outside of work? Is she eating three meals a day? And I mean like good, wholesome meals, not like a Subway sandwich or Soylent or one of those nutritional bars for every meal. I need to know, because how the hell does she possibly have the time to do anything besides work? Last year she put out four albums, all of them good, and now she’s back with WENCH, a collection of tracks made with Shayne Oliver, the founder of the fashion label Hood By Air, that the duo have been making and releasing pseudonymously on Soundcloud since 2012. If you haven’t seen Hood by Air’s clothing, or haven’t seen it in a couple of years, take a second to look it up, then think of Arca’s music, because that’s exactly what WENCH sounds like, ostentatious, yet grimy, erotic, but a little frightening, noisy, but almost classical in it’s musicality.

Most of the tracks sound like industrial vogue music, or noise ballroom music, with Oliver MC-ing in the rhythm and cadence of a ballroom MC about things like Adam and Eve and the snake and “Primal P*ssy” over alternating quiet moments of subterranean bass drum rumbles, and loud moments of machine gun blasts of stuttering noise and ear piercing sirens, and then moments of transcendent piano and synth motifs. This is kind of Arca’s formula, but it always works, and the addition of Oliver’s MC-ing, milking every last syllable of words for their sexy and foreboding powers, is cool as hell.

Plus, the tracks have great titles, like the aforementioned “Primal P*ssy,” “Sexercisot,” and “Fister,” but the last song, “Blow It Up,” is really the thesis statement for what Oliver and Arca are doing here.

If the internet is to be believed, Theo Parrish, one of the innovators of the slow, deep, nighttime groove sound of Detroit house music, is, or nearly is, middle-aged. Parrish has been putting out 10 plus minute trance-inducing midnight grooves for more than 25 years now, but nothing like the almost rhapsodic stuff on his most recent album, Cornbread and Cowrie Shells for Bertha. Here the (at least obvious) samples that a lot of Parrish’s best known tracks were built around are gone and replaced with what sounds like live instruments, sultry purple keyboards, deep blue basses, and dusty black drum machines, seemingly jamming and improvising, live, on grooves. It’s a Detroit house jam band. Or, more accurately, I think it sounds like Parrish rehearsing, jamming in his house, working out tracks on the spot at like two in the morning on a Wednesday night, getting lost in the grooves until the wee small hours of the morning, and it’s sounding great.

Interview: JoJo Hailey On Recording ‘How Do You Want It’ With 2Pac & ‘Special’ Solo Venture