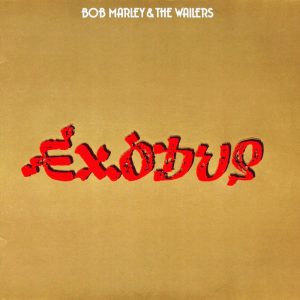 It can be disappointing when your choice in the ‘best album’ of any artist is the obvious one.  We often like to justify to others why an album with flaws is better than one that is too perfect.  In the case of Exodus however, it is hard to begrudge its status as best Bob Marley album, or in the case of Time magazine, best album of the 20th century.

Some may prefer the raw militant urgency of other Marley albums, or feel that Catch a Fire deserves more praise for its importance in developing his earlier sound to give a more international appeal, but as ‘Albums’ they are not as well rounded as Exodus is.

Now forty years after its original release, a series of special editions titled Exodus 40 – The Movement Continues are being made available.  Two and three-CD sets are out now featuring extended mixes and a live set from London’s Rainbow Theatre.  There’s also a limited edition gold vinyl of the original album which should get you salivating.  If that’s not enough then there is a ‘Super Deluxe’ version (released June 30), which contains four LPs and two 7″ singles, and contains Ziggy Marley’s ‘restatement’ of the original tracks featuring outtakes from his father and guest vocals from the likes of Beenie Man and Queen Ifrica.

Back to the original though and it is certainly an album of two halves (or sides if you prefer).  Side A focuses on religion and belief whereas side B is more about love.  It has a laid back feel musically but doesn’t breach into rocksteady territory.

The opener “Natural Mystic” sets the tone for the album.  A hypnotic, cyclical number both bass and bliss heavy…it all seems so simple and effortless but like many other songs on the album it has such a deep message in just a few words.  It doesn’t take much imagination to work out what this natural mystic might be, the answers are out there somewhere…’if you listen carefully then you will hear’.  The religious aspect of side A isn’t forced, just subtle undertones in the chant-like “The Heathen” and elements of gospel (a throwback to early Wailers songs) in the arrangement for “So Much Things To Say”.

Side B reads more like a ‘greatest hits’ list with most songs released as singles eventually.  However, even within a seemingly fun song like “Jamming” we get the lyric ‘No bullet can stop us now, we neither beg nor we won’t bow/Neither can be bought nor sold’.  If anyone could be critical of the album it may be due to the overplay and commercial nature of songs like “Three Little Birds” and “One Love”, yet the mood of optimism within them is so infectious that their placement at the end of the album rounds everything off with a feeling of euphoria and unity.

A lot of the songs on side B ended up on Legend, his greatest hits album, and placed within this context the song “Exodus” seems lost to me.  On this album however, “Exodus” is so well-placed, bridging the two sides and makes perfect sense.  The dub ending is masterful and essential and you realise what an important song it is at the heart of the album.

Exodus is full of emotional and spiritual feeling and a showcase in album structure which is vital to its lasting appeal.  There’s something for everyone in this album and its theme of togetherness is one we we’d be wise to pay close attention to forty years on.

T.I. Responds To Donald Trump Using ‘Whatever You Like’ For Joe Biden Diss

A Hit is a Hit: A Definitive Guide to The Sopranos and Hip-Hop

Donald Trump Flips T.I.’s ‘Whatever You Like’ Into A Joe Biden Diss Song