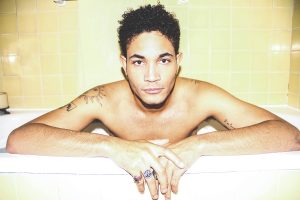 We’ve all had a celebrity crush. Or better yet, we’ve all crushed on someone like they were a celebrity. Thanks to Bryce Vine, that feeling has come to life in his new single “Drew Barrymore.” The track gives us the best parts of indie, R&B, and hip-hop – shifting back and forth between the three effortlessly.

“Drew Barrymore has become iconic to my generation,” Vine explains. “In a way, she’s like Hollywood royalty. There’s something special about her that is hard to put into words. The girl I’m talking about in the song has that same charm. It’s an unexplainable admiration for a special person – whoever that may be in your own life.”

Bryce Vine will headline the Peppermint Club in Los Angeles on 10/3, and will be touring throughout the fall.  Be sure to keep up with Bryce Vine on Facebook, Twitter, and Instagram.