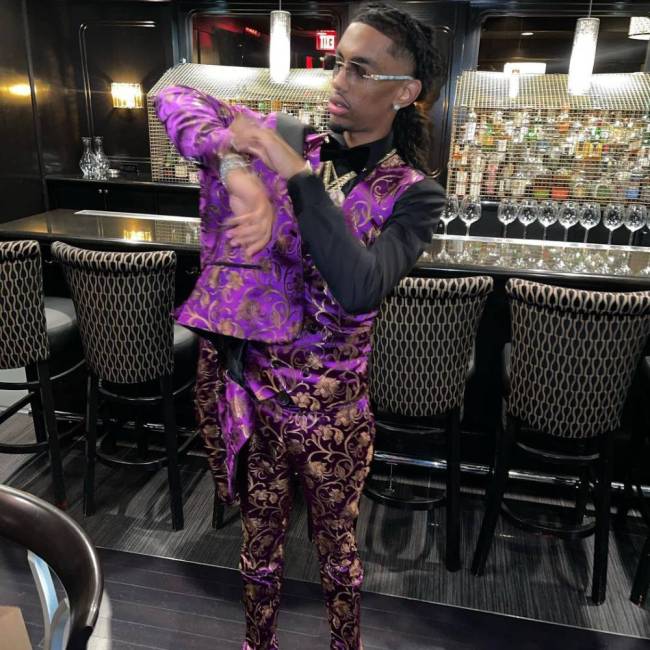 Some say that the Hyphy movement is over. “Get Low !” is EBK Osama’s Stockton antithesis. Another member of the EBK Hotboiiz, Osama further distorts Lil Jon & The East Side Boyz’ bass-heavy anthem to create a muted ravenous beat. Where Hyphy music once intertwined crunk with G-funk, EBK Osama stirs crunk together with sample drill, but with a filter that makes you think the producer has been working with Ot7Quanny for too long.

Even as the distorted instrumental melts away further and further from its original form, the claps string together and ring alongside EBK Osama as he continuously catches his breath. Mimicking someone’s reaction to the suffocating humidity of a full dance floor, Osama’s voice inhales something between a short breath and a gasp before directing foot traffic.

He brings the gunfight to the strip club as he commands, “Get low. Like a shooting habit.” The grime comes through the crunchy microphone with references to T-Pain (who originally featured on Flo Rida’s “Low”). It suggests that Osama’s music is a cross-breed between drill and R&B, which wouldn’t be too off-base.

Nef the Pharaoh takes us back to a neon-lit ‘80s roller skating rink in his latest collaboration with Oakland legend DJ.Fresh. A collaborative album with DJ.Fresh means that you’ve officially become a mainstay within Bay Area culture. Whether it be the everyday lyrics and weed smoke of Curren$y, the G-Funk of an early Freddie Gibbs, or the suave, R&B-dipped authority of the late-Jacka, partnership with DJ.Fresh holds the same value as the Drake-feature within Northern California. With no relation to Rotten Tomatoes, you’ll be certified fresh.

Artists traditionally step out of their comfort zone when they work with Fresh, and in this case, Nef revisits the style of his hometown hero, Mac Dre, as he skates across the rink. He calls back to the interactiveness of the Vellejo icon’s music, rapping simple lyrics and phrases that their listeners can easily repeat back when the song plays. Similarly to how “Thizzle Dance” immediately prompts the thizz face, and how “Get Stupid” nudges listeners to sing along, “S-T-U-P-I-D,” Nef the Pharaoh employs a layered hook so that it sounds like the people around him are repeating the hook, “Easy come, easy go,” with him in unison. By the time ShooterGang Kony hops on to take his verse, his work becomes crowd control; Kony acts as “the real Dirty Dan” — SpongeBob’s sheriff alter-ego that runs this town.

Marjorie -W.C. Sinclair might as well be cousins with Babytron. His flow is off-kilter, spoken with a sprinkle of Woody Harrelson’s gruff and the low-register monotony of a whisper. Just like ‘Tron, Sinclair’s beat selection induces sentimentality — electric piano chords pulsate to wistful ‘80s R&B while the modular synthesizers oscillate. Amidst a heartbreaking anime sample that previews a character begging for solace: “Kato! Did you hear him? We can go home, it’s over,” meanwhile the other voice is afraid that they’re leaving their friend for dead.

“Daikirai” maintains the split-second stillness that exhibits itself in life-or-death situations. Via shrieks from the characters throughout the song, the Oakland-based Orion Ohana taps into his rap persona Marjorie -W.C. Sinclair. Apart from his other noise-centered project, Evanora:Unlimited, his multitude of selves come together ever so slightly in “Daikirai,” as he drops references to “Lucian” from League of Legend, along with mentions of his pistol and his sarcastic approach to calming his girlfriend, all over a racing beat that weaves itself through darkness like a motorcyclist making their way towards a tunnel. Marjorie -W.C. Sinclair sees himself as an antihero, giving directions like the leader of a Simon Says game, somberly remembering love through the lens of a dark past.

Even before the producer tags play all the way through, DB.Boutabag is rehearsing the first few bars of the song, hushed and fully-ready to start the verse over again. Coming off Boutabag’s paradoxically titled mixtape, I Am Not Rapping, “10K Weeks” is an homage to the word bubbles on the album cover, where DB.Boutabag is pictured recording on the toilet in his bathroom-turned-studio, with blunt smoke spelling out the album title. “I’m shit talking” is etched into one of the smoke clouds, which makes you wonder, is this even a rap album?

In short, yes. DB.Boutabag has mastered the art of tooting his own horn (no pun intended), but just so happens to be rhyming. From the beginning of the track, he explains that his: “Bape came from out of state… You can’t buy these.” Boutabag then proceeds to pursue various tangents about the inexplicably high-priced lobster mac n’ cheese he pairs with his steak, his keyless foreign cars, and how he can’t imagine what it’s like for other people to watch his life play out from the bench. Without a hook, these casual boasts still come off as catchy, with DB.Boutabag repeating up to 3 lines at a time, just in case you want to pretend like you’re spending $10k a week too.

Dollas Up Nero x Kool John  – “Money On My Mind”

Before the EBK Hotboiiz, SOB X RBE, Trill Youngins, and frankly most of the 2010-era Bay Area collectives, HBK Gang reigned supreme. They were upbeat and carefree, almost overemphasizing the happy-go-lucky stereotype of the West Coast. HBK (Heartbreak) Gang made summertime hits like “Never Going Broke,” which I inevitably blew out my speakers to in high school. Mainly composed of P-Lo, Kehlani, Sage the Gemini, Kool John, Iamsu!, Jay Ant, and Skipper (just to name a few), the bounce in the collective’s sound takes form through The Invazion’s (their producer team) delicate touch. At least one stem within the song needs to sound bright, whether it’s a jazzy saxophone riff, an organ melody, or in this case, a twinkling keyboard.

Kool John is known for pasting green bills into his rhyme book, and “Money On My Mind” is no exception. Kool John adapts the light, electric piano-centered production to deliver lyrics about cash counting and getting rich off of pop-ups. That’s the beauty of HBK; they branded their group into a streetwear brand within the Bay with their signature 8-bit broken heart. That’s why you’ll always hear Kool John rapping about the racks on his mind, whether it’s 20s, 50s, or his infamous “Blue Hunnids.” Dollas Up Nero joins the song with a flow that works against the beat, jolting the end of his phrases with accents, using the “oomph” in his voice to support the bass drum hits. The pair breeze through the track, working synonymously with the beat as an extension of their voices, with Kool John continuing that trend with the laidback ease in his baritone.