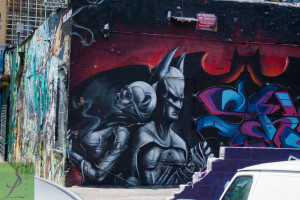 Meres One, curator of 5 Pointz, has stuck to his word of “it’s not over ’til I say it’s over” when it comes to saving the Aerosol Art Museum.  The week after New York City Council gave the go-ahead to David Wolkoff to commence his plans to demolish the warehouse complex to make way for yet another steel and glass monolith, Meres One and company were in federal court in Brooklyn for the first hearing on their suit that is based on the Visual Artists Rights Act.  The judge issued a 10 day restraining order.  That order was the time that Jonathan Cohen (Meres One) and the artists were hoping for.  It can provide them with up to a year to keep 5 Pointz alive.

After this hearing, Ricky Camilleri of HuffPost live took the combination of 5 Pointz plight, the 30th anniversary of the release of the movie Wild Style and Banky’s New York “residency” to showcase all of that. He brought Charlie Ahearn and Lee Quinones, Director of Wild Style and one of the artists from the movie into the studio and had Meres One on remote feed.  During the conversation, Quinones mentioned that he may have the connections 5Pointz has been hoping for, people with enough money to make a bid on purchasing the comples from G&W Realty.  Part of the reason for the roadblocks Cohen is putting out there is to make the time needed to raise the money to make an offer to become the owner of the complex.

Cohen has also put it on the streets that he would like to see Banksy grace 5 Pointz with his work while he is in New York.  Jonathan does feel that it could help their cause or at least have that kind of legendary art on the building before it comes down.

You can watch the conversation on HuffPost live here:
http://live.huffingtonpost.com/r/segment/5-pointz-graffiti-demolished-street-art-nyc-wild-style-30th-anniversary/5257109c78c90a26d200032f

DJ Jazzy Jeff Hints He Has Coronavirus As He Battles Pneumonia

T.I. Returns With Comedic Gold After Fan Says He Only Has "2 Good Songs"